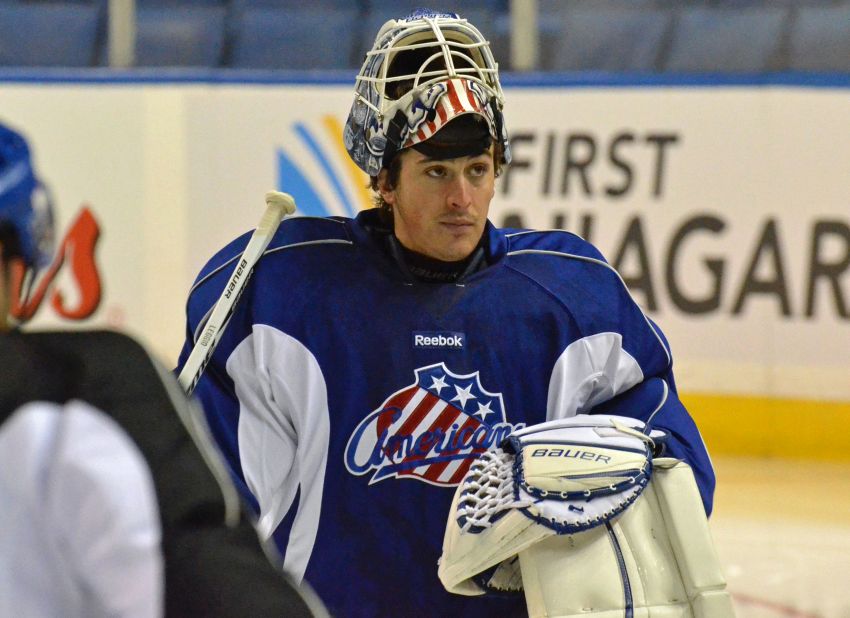 Williamsville native David Leggio can laugh and smile now reflecting on a crazy seven months. A season that began with the veteran goalie sitting at home looking for work ended with him celebrating a championship wearing lederhosen following a dynamic 14-game playoff run starring for Munich WHC, a team in the German DEL.

“This was the way I hoped it would go,” Leggio said Wednesday. “It doesn’t happen often. It doesn’t always happen how you envision it.”

“I had to bounce back this year or it could’ve been a wrap for me,” he said.

What Leggio called the longest three weeks of his life began Oct. 1, when the Winnipeg Jets organization released him from his short tryout, leaving him fretting about his uncertain future.

When Leggio struggled badly in 2014-15 with the Bridgeport Sound Tigers, the New York Islanders’ AHL affiliate, he started worrying he would never receive a chance to play in the NHL.

“That was tough to deal with, but I tried to block it out,” Leggio said.

But that poor campaign hurt more than his NHL aspirations. Leggio was once perhaps the AHL’s best goalie, posting some gaudy numbers as the Rochester Americans’ workhorse starter in 2011-12 and 2012-13.

Despite a strong body of work, he couldn’t even find an AHL gig following his first down season. At that point, the St. Joe’s product said he “was just worried about getting back to a high level.”

“I was looking at everything,” he said.

Leggio wrestled with taking a job in the ECHL, a league below the AHL he quickly outgrew after playing one season in 2008-09.

“Initially, my worry was that I was going have to start back in the ECHL,” he said. “I didn’t really want to do that. I’ve been there, done that. It’s a great way for goalies to start. But it’s certainly not the way I want to finish or transition.”

While that time at home was difficult – Leggio joked about his constant calls driving his agent nuts – he also enjoyed it. The Clarkson University graduate practiced with some local players, an activity he said “kind of brought me back to my roots, I guess.”

Eventually, the opportunity in Germany materialized, and he a signed a contract Oct. 20 with a team sponsored by Red Bull.

Leggio won a championship in 2009-10 in the Finnish SM-liiga, so he knew the European game well. That season caught the Buffalo Sabres’ attention, and he spent the next three seasons playing for their AHL affiliates.

He performed so strongly in 118 appearances in Rochester he deserved a recall to the Sabres but never received one. Following another notable season with the Hershey Bears, Leggio posted awful numbers – 3.93 and .861 – in Bridgeport.

“I knew that last year was just kind of like an outlier and it wasn’t who I was,” he said. “I worked really hard in the summer. I started skating earlier that I think I’ve ever skated to just fix a lot of problems so I could get back to the level I’m capable of. I just needed someone to give me a chance.”

After splitting time during the regular season in Munich, Leggio was awarded the starting job in the playoffs, and he responded with perhaps the best two-month stretch of his career.

“It meant a lot to me just to be able to prove, OK, I can still play,” he said. “I’m still pretty good. I always felt that way.”

Leggio said he felt cold celebrating his championship in lederhosen featuring the Red Bull logo the team handed out to players.

“That’s what they do in Bavaria, I guess,” he said.

During another part of the celebration, a double-decker bus carrying the team was cut off by a Maserati and hit the car.

“Everyone went flying,” Leggio said. “I’m surprised no one fell over top.”

Leggio enjoyed Germany and its culture and is open to returning. But he said his “goal is still to play in the NHL and get a chance.”

“If I get another chance back home, that would be awesome,” he said. “If not, Red Bull is a great place to play and a great organization. I really enjoyed it.”

One thought on “Williamsville’s David Leggio rebounds with championship season”