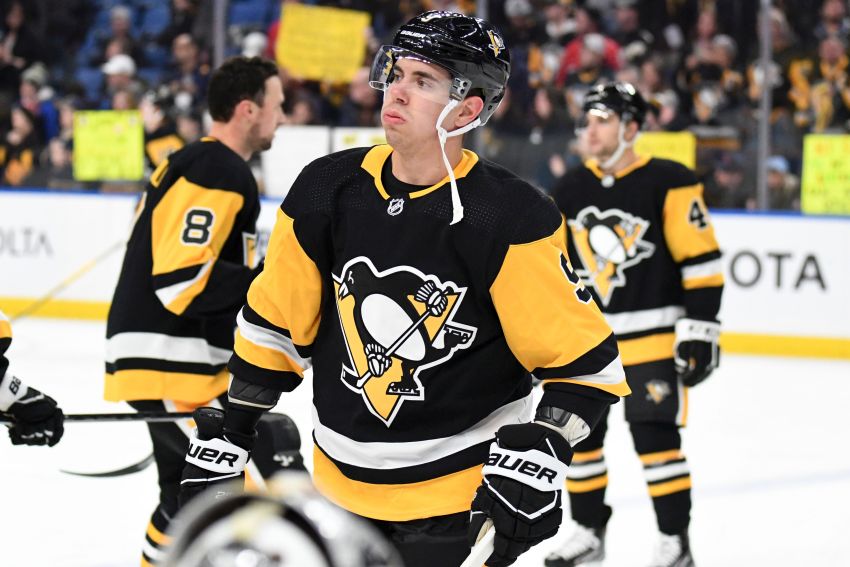 BUFFALO – In their first days with Pittsburgh, ex-Sabres Evan Rodrigues and Conor Sheary experienced more losing. The forwards joined the powerhouse Penguins during what would become their longest losing streak since the 2011-12 season.

Rodrigues quickly learned more than talent separates his new team, which won three Stanley Cups over a nine-year stretch, from the Sabres.

“They just have such a calming presence, there’s no real panic in the room,” Rodrigues said prior to Thursday’s 4-2 win over the Sabres, his first visit back at KeyBank Center. “We’re obviously going through a little bit of a losing stretch there when I first got here, and even then there was no worry, no panic.

“It was just kind of get ready for the next game and prepare the same way and eventually it was going to turn. That was the mindset.”

The Penguins’ mindset, according to Rodrigues, includes an expectation they will win every game.

“They’re confident, they have some swagger,” said Rodrigues, whose Penguins ended their six-game skid by beating the Ottawa Senators 7-3 on Tuesday. “It’s almost a sense of being there before. Whether we get down in games 1-0, 2-0, we think we can come back in any game.”

The Sabres granted Rodrigues’ wish to be traded shortly before the Feb. 24 deadline, when they packaged him with Sheary to acquire winger Dominik Kahun.

Rodrigues, 26, struggled under new Sabres coach Ralph Krueger this season, often sitting out as a healthy scratch. Still, he will always be grateful to the team.

“It’s the organization that gave me a chance and let me become an NHL player,” said Rodrigues, who signed as a college free agent in 2015 out of Boston University. “I’ll always be grateful for that. The city was nothing but nice to me. I had my first child here. There’s a lot of lifelong memories that I’ll carry with me.”

Rodrigues, of course, carries memories of losing. He never sniffed the playoffs with the Sabres.

He can’t explain why the Sabres never get over the hump. This season and last year, for example, they got off to torrid starts before imploding during the winter.

“I don’t have an answer for you,” said Rodrigues, who’s playing on the fourth line. “It’s a great group in there, the skill is all there, the talent is all there. I honestly can’t put a nose on it. It seems like every time around this year, whether it’s bounces, or I don’t know if it’s will, maybe not being there before in the situation, not having the success in that situation, that it just kind of wears on the room.

“I don’t really know the answer to that, because when you look at it on paper, in the room, being in the room – all the talent’s there, all the pieces are there. It’s just kind of executing and making it happen now. Maybe the stretch there hasn’t gone the way they wanted, but they’re extremely close.”

Meanwhile, Sheary, 27, struggled throughout his 133-game tenure with the Sabres, scoring only 23 goals. He scored 23 times in 61 contests in 2016-17 during his first stint with the Penguins.

Sheary, who’s playing beside superstar Sidney Crosby again, said “it’s hard to put your finger on” why he never produced much here.

“Throughout the two years I was here the team struggled a little bit to score offensively,” said Sheary, who won two Cups with the Penguins. “To put together good seasons, I think we just, for whatever reason, were stuck in a rut. I take a little bit of responsibility in that, because I came in to be an offensive guy and help the scoring.

“But for whatever reason, it didn’t work. I don’t know what it is, you don’t create chemistry? I don’t know.”

Sheary received a warm ovation Tuesday in his first home game back at PPG Paints Arena.