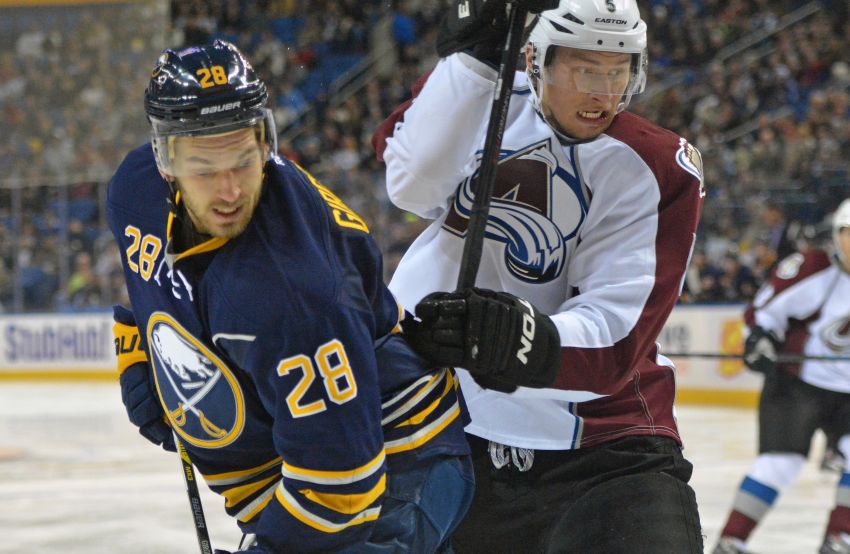 BUFFALO – Saturday’s 5-1 loss to the Colorado Avalanche, the Sabres’ second consecutive ugly defeat, also ended their six-game home winning streak. After winning 10 of 13 contests to creep within four points of a playoff spot early last week, the Sabres have been outscored 10-2 in the last two games.

To make matters worse, injuries and illnesses are starting to ravage the Sabres. They lost three more players Saturday, including minute-munching defenseman Tyler Myers, arguably their most valuable skater.

Myers left with a lower-body injury after playing only 13 minutes, 10 seconds. The Sabres will recall a defenseman from Rochester before tonight’s game in Boston, coach Ted Nolan said. Myers was being examined, Nolan said. Myers is questionable for the Bruins.

The Sabres also lost Patrick Kaleta to illness. Prior to the game, the Sabres recalled winger Johan Larsson, who scored his first NHL goal later on, because Matt Moulson was too sick to play. The Sabres might also need a forward, Nolan said. Moulson’s status is unclear.

Mumps is spreading throughout the NHL. So far, the Sabres have escaped unscathed.

“I’m not too sure,” Nolan said when asked if any players have mumps. “The medical team will look at that. Right now, just flu-like symptoms, I guess. But a few guys are feeling that way, maybe it’s just a flu.”

Nolan shifted winger Nick Deslauriers back to the blue line, where he began his career.

With 28 points each, the Sabres and Avalanche began Saturday as equals. The Sabres even had three more wins (13-10) than Colorado, a 112-point club last season that has stumbled mightily this campaign.

At times, however, the Avalanche looked like a powerhouse before the 18,831 fans inside the First Niagara Center.

Erik Johnson opened the scoring 2:23 into the game. Cody McLeod followed at 7:07, the fifth short-handed goal the Sabres have allowed this season.

“They’re a very skilled team,” Nolan said. “If you give them a chance, they’re going to put them in. The scary part is I liked our first period, except we made a couple crucial mistakes.”

Larsson, meanwhile, got the call at 5 p.m. in Rochester – yes, that late – to come to Buffalo. He quickly hopped in his car and got to the rink with about two minutes left in the warm-up.

“Of course, nice to get the goal,” Larsson said about the first score of his 34-game career. “Obviously, tough to lose.”

The Sabres haven’t beaten the Avalanche since Dec. 4, 2005, an eight-game stretch.