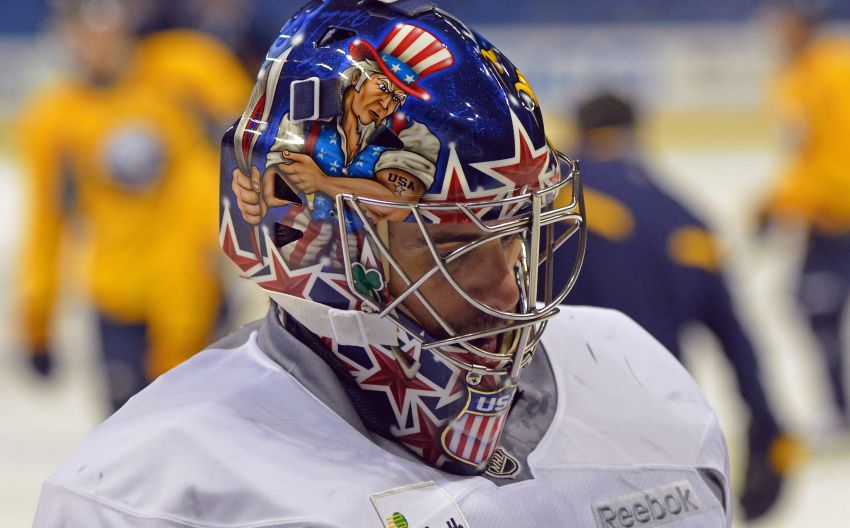 “I thought it was a cool mask last time,” Miller told the Times Herald on Sunday. “I just want to update the colors. I want to do something more traditional red, white and blue. Last time it was like a little off blue-gray kind of thing. Just changed it up a little here and there, just kind of like my mask in Buffalo.”

Miller still has the muscular, torch-bearing Uncle Sam painted on one side and an eagle on the other. Shamrocks adorn both sides again, a nod to Jim Craig, the U.S. goaltender for the 1980 Miracle on Ice team.

A USA Hockey shield has replaced the Olympic rings and logo on the chin. The back plate has Miller, his wife, actress Noureen Dewulf, and their dog depicted as Russian nesting dolls.

Miller had “Miller Time” and “Matt Man,” a tribute to his cousin, on the back last time. The International Olympic Committee made him cover them up, however.

“You can’t have any political statements, tributes, photographic likenesses,” Miller said. “So everything has to be artistic representation or something. So nothing commercial. Basically, if they can’t make money off of it, you can’t.”

He said it probably took his designer, Ray Bishop, a couple of weeks to get the mask in order. The two sent sketches back and forth.

“He’s just missing here and just missing there,” the interim coach said Monday prior to the Sabres’ 3-2 loss to the Edmonton Oilers. “When those things just keep missing, you look at the overall picture that he’s not playing well at all. But, truth is, he has played in spurts. It just didn’t click in.”

Leino has zero goals in 37 games. So the Finn sat as a healthy scratch Monday for the third time this season. He was a minus-2 in Saturday’s 7-1 drubbing in Colorado.

“Drew, he comes back, and, boom, pucks go in for him,” Nolan said about Stafford, who scored three times after returning last month and early Monday. “If that happens with Ville one day, you never know what you have.”

The Sabres honored former Bills wide receiver Andre Reed, who was elected to the Pro Football Hall of Fame on Saturday, with a video tribute.