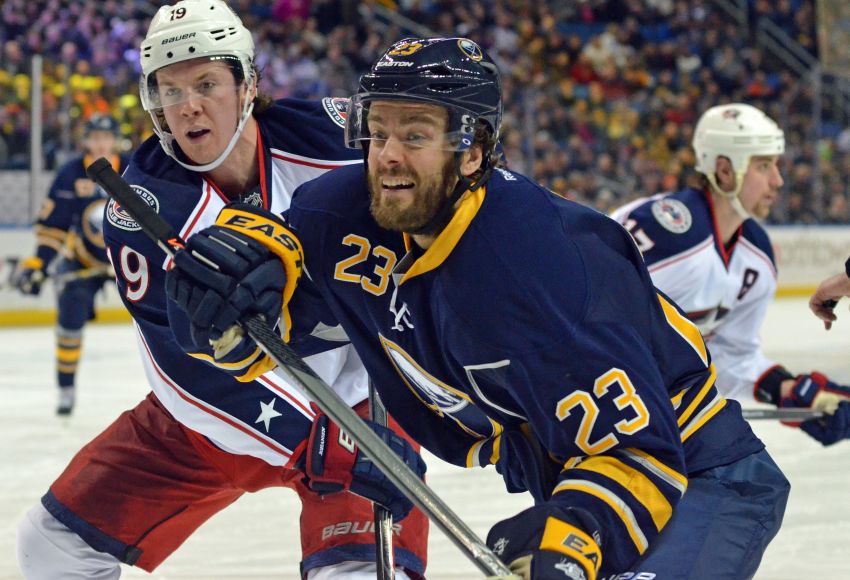 BUFFALO – Ville Leino said he doesn’t mind battling or working hard, two aspects of his game interim Sabres coach Ted Nolan has questioned. Getting hit “or getting into stuff,” well, the struggling forward doesn’t mind that, either.

“I like battling,” Leino said Monday following practice inside the First Niagara Center. “Sometimes in a game it’s hard to get into the game, to get inside of the game to go battle hard. So somehow you just have to find a way to get in there.”

So far, Leino hasn’t found a way. The Finn has zero goals in 30 games this season entering tonight’s home tilt against the Florida Panthers.

Clearly, Nolan’s patience is wearing thin. He already benched him Dec. 10, making Leino wonder “what he wants out of me.” Leino lost ice time late in Saturday’s 4-3 shootout loss to Columbus and skated on the fourth line beside Matt Ellis and John Scott during Monday’s practice.

In his own calm, controlled way Nolan has been ripping Leino. He questioned his will to compete, battle and “get dirty once in a while” Saturday morning. Following the game, Nolan said Ellis replaced Leino on a line beside Cody Hodgson and Steve Ott because the Sabres needed energy.

“We’re looking for people that want to compete and want to work,” Nolan said Monday. “It doesn’t matter what your skill level is. There’s nothing with no will. So we have to get him competing at a certain level. Some days he shows it, some days he doesn’t.”

Nolan also said: “You get frustrated with most people who don’t do it on a consistent basis. But he’s showed some signs lately.”

Leino, three seasons into a six-year, $27 million contract, said he’s been talking with Nolan about his style.

“Obviously, I want to do that, too,” he said. “You want to battle. You want to get dirty.”

This is, of course, the roughest stretch of Leino’s career.

“I haven’t had a slump like this, that’s for sure,” said Leino, who noted he likes the team and has nothing bad to say.

Despite averaging 14:49 on the ice each game, the 30-year-old has just six assists. He hasn’t scored since tallying twice March 30, his final appearance of 2012-13. Those are his only two goals in his last 39 games.

“Some days more, some days less,” Leino said about his frustration. “But of course it’s frustrating. There’s no way around that.”

Still, Leino, a strong puck carrier, has been generating some chances.

“There was a time period there, say 10 games ago, where we created,” Leino said. “Our line was creating chances every game, five, six chances. But it just didn’t go in. But there’s still a couple of chances a game. I’d love to capitalize on some of those and get some numbers.”

To capitalize, Leino has to start shooting. He has 22 shots all season, including zero in the last three games and one in five. He didn’t record his first shot until his seventh appearance.

Plenty of players possess a pass-first mentality. But Leino’s infamous for dishing when he’s in prime scoring position.

“I should have more shooting,” Leino said. “You know what? You have to have that if you want to score. Sometimes I’m lacking that a little bit. But when you’re scoring, you’re shooting. You see the puck go in. You want to shoot because you feel like you’re going to score.

“But then if you’re not scoring, you feel like you have to make a perfect play or a perfect pass to make something happen because it’s just not going in. But then you’re just going to have to simplify, shoot.”

Does Leino, who went back to the wing last week following a two-month stint at center, sometimes kick himself after passing up a great chance?

“I do,” he said. “Those are the annoying parts you feel after a game because you should’ve made a different decision. Those are the ones that every game, when the game starts, they haunt you a little bit.”