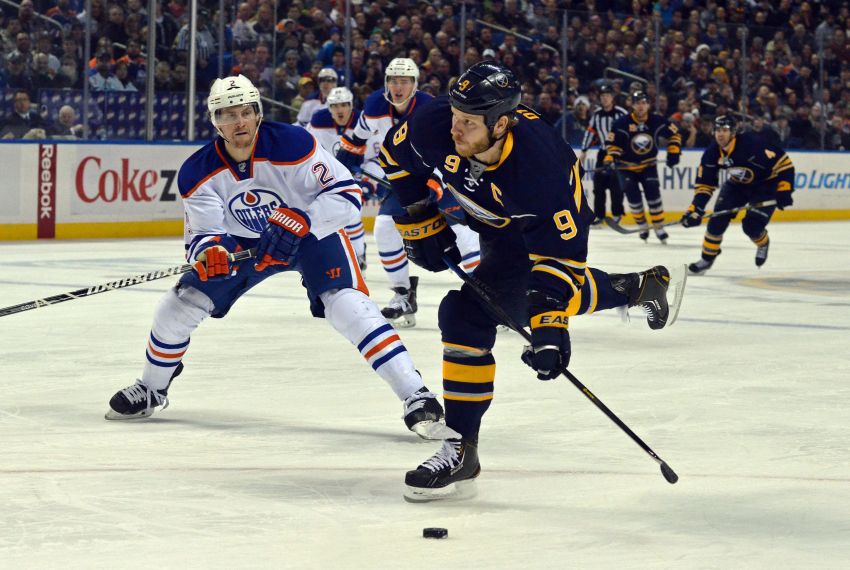 But the Sabres settled down against the hapless Oilers and their porous defense, taking a 2-1 lead before the first period ended.

At times, the “Battle for the Basement” or the “Game of the Weak” – nicknames media members gave Monday’s game inside the First Niagara Center – was a pretty entertaining affair.

“They scored first shift. It’s tough,” captain Steve Ott said following the Sabres’ 3-2 loss, a penalty-filled contest before 18,531 fans. “But I liked our bounce back.”

Still, the Sabres, who pumped a season-high 44 shots on goalie Ilya Bryzgalov, couldn’t capitalize again, hitting posts and losing a late goal to an early whistle.

The Oilers tied it late in the second period before Matt Hendricks scored a nifty short-handed breakaway 57 seconds into the third period.

“It was just one of those unfortunate breaks,” interim Sabres coach Ted Nolan said. “I thought we played well enough to win that game. That’s the way the puck bounces sometimes.”

The Sabres lost more than the game, though. Defenseman Tyler Myers, who’s been showcasing his elite puck-rushing ability again recently, left the game with 4:27 remaining in the second period (lower body) after David Perron hit him.

“Little concerned, but no news is good news,” said Nolan, whose expression might’ve said more than his words. “So we’ll see what the doctors have to say.”

Nolan’s “not 100 percent sure” if Myers will miss time.

Myers created the Sabres’ first goal, lugging the puck into the zone before grabbing it again in the slot. Ott then knocked the rebound in on the power play at 8:04.

Drew Stafford, just back from an upper-body injury, put the Sabres up short-handed at 19:04, beating Bryzgalov from the right circle.

Stafford, who struggled earlier this season, has four goals and six points in his last five games.

“I thought Drew, the way he shot that puck, that’s what we want to see,” Nolan said. “He’s a big power forward, and he’s starting to get his confidence back.”

Justin Schultz tied it 16:45 into the second period.

The Sabres appeared to knot it again 9:45 into the third period following a strong shift from the fourth line, but the referee blew the play dead before Marcus Foligno poked Matt Ellis’ rebound in.

“The puck was laying in the crease,” Ellis said. “It was definitely still loose. Marcus went hard to the net, ended up poking her through. I guess for the ref’s vantage point he lost sight of the puck, thought it was covered.”

Nolan added: “When you happens to you, you think they blew the whistle too fast. When it goes in your favor, they don’t blow it fast enough.”

“He’s a heck of a goalie,” Ellis said. “He played great. A couple breakdowns, they’re in the back of the net. We’re in this together. Obviously, we want to do our part to get Jhonny back moving in the right direction.”