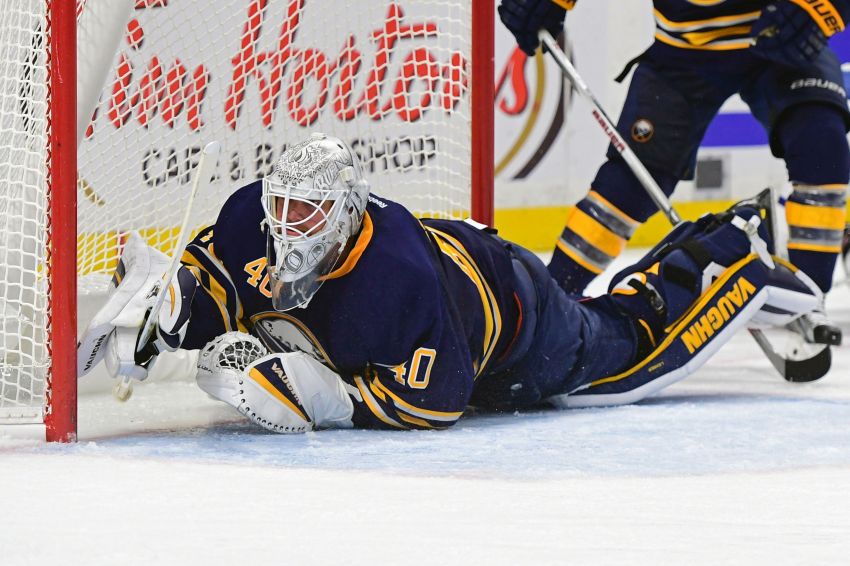 BUFFALO – The flu bug going around the Sabres dressing room has hit goalie Robin Lehner, so the Swede will miss tonight’s tilt against the Philadelphia Flyers.

Backup Anders Nilsson will sub, his third start in four games. Expect a goalie, most likely Linus Ullmark, to be recalled. Sabres coach Dan Bylsma wouldn’t confirm Ullmark was coming up, however.

Update: Ullmark has officially been recalled.

Bylsma said no other players are sick.

“He did a great job of adding confidence to our players,” Bylsma joked.

Naturally, playing regularly in the last week has helped the Swede find a groove.

“It helps a little bit to play more consistent and play more often,” Nilsson said. “Usually you think a little bit less and just go out there and play.

Nilsson started the Sabres’ 4-3 overtime loss Oct. 25 in Philadelphia, a game in which they melted down late, allowing three third-period goals.

In other news, center Derek Grant is likely the odd forward out tonight. Defensemen Josh Gorges (hip) and Dmitry Kulikov (back) will also be scratched tonight.

Update: Grant, who has zero goals and three assists in 35 games, is on waivers, according to reports.

Winger William Carrier is set to return after the flu sidelined him two games. The rookie skated with top center Ryan O’Reilly and Kyle Okposo this morning.

“We just don’t have a ton down the middle with the injury to (Johan) Larsson,” Bylsma said. I still want to see our top-six forwards being in top-six positions. Sam has done a good job at center. We’re going to need him there tonight.

“But I also think you’re going to see the line shrink a little bit given the time in the game, situation in the game, and see Sam play next to Jack.”

Eichel, of course, is one of the most offensively gifted players in the league. His defense, however, has been a work in progress.

“He worked extremely hard last year on becoming more a complete player in both ends of the rink, both sides of the puck,” Bylsma said. “He’s still working to do that. He’s gotten better at that. He’s been thrust into situations this year with our injury situation where he’s been both the top centerman and the checking centerman in different games.

“We’ve put him out in situations where he’s had to play defense against top guys, win draws and battle down low. He’s done that. He’s really that player for us. He’s got to continue to grow in that area.”