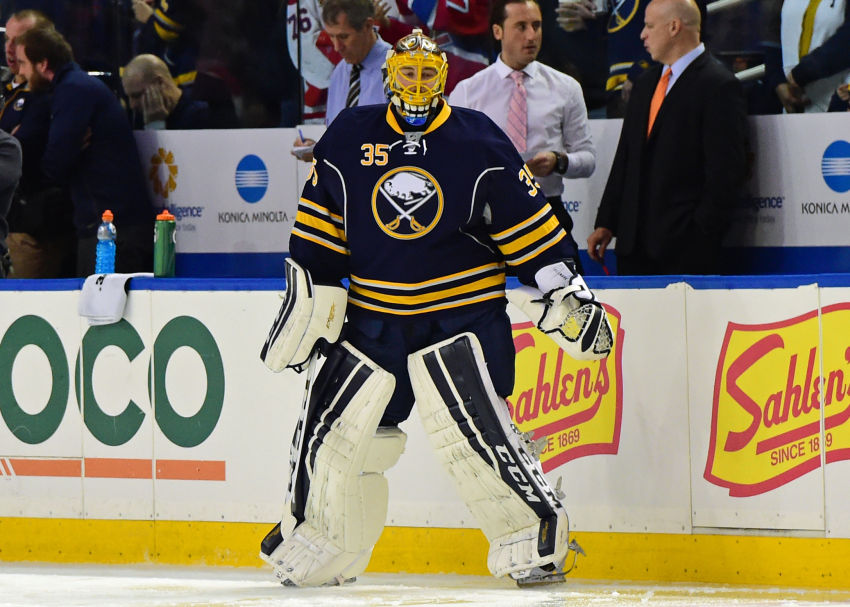 Ullmark dazzled in the AHL, making 38 saves in his debut and 43 on Wednesday. Now, just three games into his North American career, he’s already in the NHL.

The Sabres recalled the 2012 sixth-round pick Friday prior to the Sabres’ 7-2 loss to the Montreal Canadiens inside the First Niagara Center and sent backup Nathan Lieuwen, who hadn’t played in two weeks, back to the Amerks.

Sabres coach Dan Bylsma wouldn’t say following the game. However, sooner or later, Johnson, who has played every game this season, will have to rest. The Sabres might want to use Ullmark, arguably their top goalie prospect.

Of course, this could also be a short recall to get Lieuwen, who allowed seven goals Friday in Rochester before getting yanked, some game action and Ullmark a taste of the NHL.

Either way, the loquacious Ullmark is “super excited.”

He said he received the news Thursday when he was out eating. He couldn’t tell his family members because they were at home in Sweden sleeping.

Ullmark went 1-2 with a 2.72 goals-against average and a .932 save percentage in Rochester. His hips, which he said started bothering him early in 2015, feel strong. He believes he plays more agility now.

The smaller North American ice surface hasn’t been a problem yet.

“There’s a lot of difference just because the ice is smaller, just tighter and all the bodies are close to you all the time,” he said. “It’s always a threat when they have the puck in the zone, compared to Europe. … If you shoot it from the boards it always an easy shot in Europe, but when you’re here you can always be sure that someone’s going to tip it.”

Ullmark, as Sabres fans might learn, has an upbeat personality and always seems to be smiling. He likes to wear colorful masks with characters painted on. He recently ditched his Bowser Nintendo mask for a blue and gold Sabres one with the Minions from the movie “Despicable Me.”

“A lot of my friends and family, they just love the Minions,” Ullmark said. “Whenever you talk to them, everybody loves (them). We thought it would be great to have on the mask.”

Notes: Jim Roberts, who coached the Sabres for 45 games in 1981-82 and also spent four seasons as an assistant, died Friday. He was 75. Roberts won five Stanley Cups as a player with Montreal. … The Sabres made defenseman Carlo Colaiacovo and center David Legwand healthy scratches.