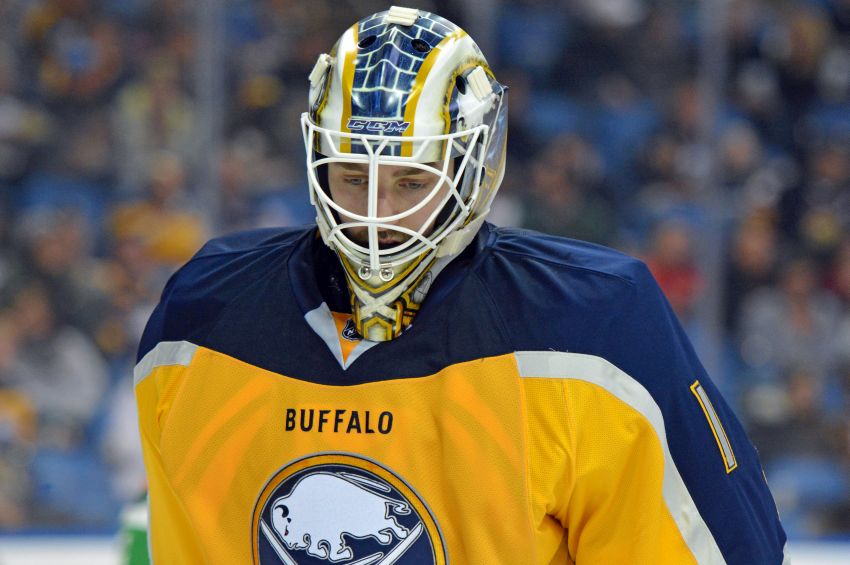 BUFFALO – The market for goalies this season is small. Most teams are set in net. Tim Murray had two soon-to-be free agents with starting experience on his roster, yet the Sabres general manager only received one call from an interested club.

General manager Jim Nill, whose Stars are fighting for a playoff spot, has received wonky goaltending all season from Lindback and Kari Lehtonen. Nill desperately needed to add someone new.

Murray and Nill talked Saturday when Dallas visited Buffalo and again this week. Then Wednesday, hours after Murray pulled a blockbuster deal with the Winnipeg Jets, he dealt the 26-year-old Enroth.

“He’s in the fight of his life for a playoff spot,” Murray said about Nill. “So it works. The timing is right.”

The diminutive Enroth is reunited with former Sabres coach Lindy Ruff in Dallas.

“I couldn’t think of a better spot for Jhonas to have an opportunity to play playoff games, seeing that Lindy’s coached him before and obviously likes him, and Dallas has been a team that maybe hasn’t been happy with their overall goaltending picture,” Murray said. “He’s got a great opportunity to go in there and show what he can do.”

Enroth started most of this season, going 13-21-2 with a 3.27 goals-against average and a .903 save percentage in 37 games. The numbers look bad, but the Swede faced a barrage of shots most nights in front of the NHL’s worst defense. He could thrive on another team.

Murray said he wasn’t sure if Enroth could become a No. 1 goalie.

Still, Murray said the Sabres could be interested in Enroth, who had stated his desire to stay in Buffalo, when he becomes unrestricted in July.

For now, the Sabres have the oft-injured Michal Neuvirth and Lindback in net. Murray wants to examine Neuvirth, one of his first acquisitions last year, to see if he can fill the goaltending void. The Sabres don’t have any youngsters in the system ready to graduate to the NHL soon.

The Swede, a free agent after the season, once drew comparisons to Predators star Pekka Rinne coming up in the Nashville organization. But he hasn’t done much in the NHL.

“He hasn’t hit his potential at all,” Murray said. “So this is a tryout, if you will, for him.”

The Sabres have other upcoming free agents – most notably center Torrey Mitchell and winger Chris Stewart – who will almost certainly be dealt before the March 2 trade deadline.

“I’m going to try to get something for them,” Murray said about players who will be unrestricted. “This is just part of the process.”

Murray on Sabres coach Ted Nolan: “We’re in 30th place. We don’t have the most talented team in the world. I recognize that. That takes time. … I would like to see more consistency, and I think that’s just not on the coaches, that comes from the players, too. So we evaluate every day.”

Murray on the Sabres’ recent 14-game losing streak: “My mindset was partway between insane and (ticked off), I guess. … Nobody wants to be on a 30th-place team. Those guys aren’t happy in there. Nobody’s happy. Nobody buys into this tanking stuff. These guys want to win.”