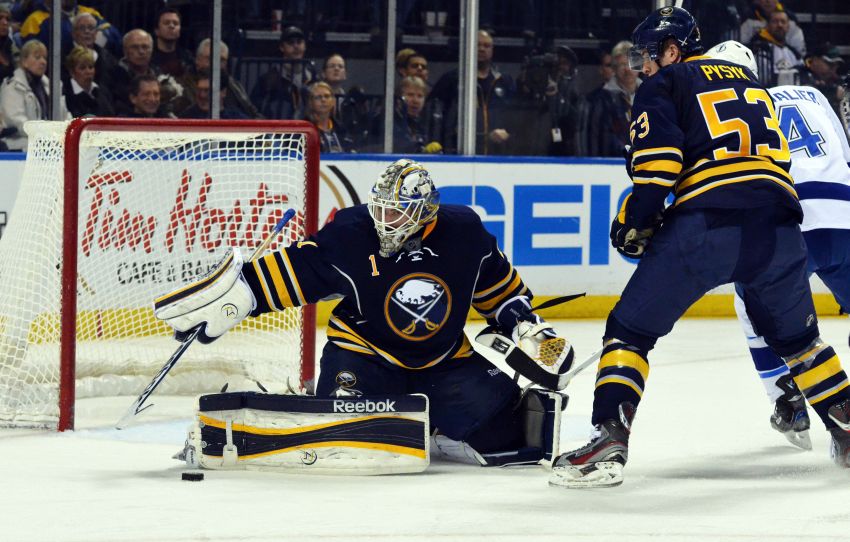 Back in November 2011, Enroth sported an eight-game winning streak as Miller was beginning a wretched three-month slump. The Swede’s second nod ignited a goaltending controversy.

These days, Miller’s entrenched as the No. 1 goalie. Enroth, meanwhile, recently regained the dynamic form he showcased early during his rookie season.

If the Sabres, whose playoff chances remain scant following Sunday’s solid 3-1 win over the Tampa Bay Lightning, move Miller this offseason, Enroth could be a viable option again as a starter.

“I’m just trying to stay in the moment,” Enroth said. “I don’t live in the past or live in the future. I’m just going to try to stay humble and get ready.”

Following the 24-year-old’s 61-save weekend – he also blanked Philadelphia 1-0 on Saturday, getting him the Lightning game – teammates lauded Enroth.

“He’s a solid goaltender,” Sabres defenseman Mike Weber said. “He’s been that way his years in the minors. Up here, he just had a little bit of a tough stretch toward the end of last year and beginning of this year. We all believe in him. He’s a great, athletic goaltender.”

“It was a tough stretch for him,” Ennis said, “but … he’s done a good job bouncing back.”

“You want to play as many games as you can,” he said. “Just keep working hard and see what this (does) for next season.”

“No one in the room was happy with the effort level that we had,” interim Sabres coach Ron Rolston said. “You can tell the guys are just working hard on defense. … There’s a lot of sacrifice out there for each other.”

The Sabres’ fifth victory in seven games inched their playoff chances up .03 to .06 percent with five contests left, according to sportsclubstats.com.

“I think the guys in the room believe that they’re a playoff team,” Rolston said. “We’ve had some setbacks in the last week, especially the Montreal game. There’s a lot of pride in that room.  Guys were able to bounce back.”

Weber added: “We’ll see what happens. We continue to keep playing this way. It’s not fancy hockey. It’s not the most exciting hockey, but we’re winning games. We’re sticking with our game plan.”

Ennis’ power-play score 4:09 into the game, his first point in eight games and first goal since March 21, opened the scoring.

“I think it was more relief,” Ennis said about the feeling he experienced. “It felt really good to go in. It seemed like forever.”

Benoit Pouliot ended Enroth’s shutout stretch at 96:11 with 13:30 left in the third period.

“We’ve had some changes and injuries,” Ennis said. “I think our D’s done a good job. Tonight, (Mark) Pysyk and (Chad Ruhwedel) stepped in and (Adam Pardy) and played some good minutes and shut those guys down. Those guys are tough to shut down. It was impressive.”