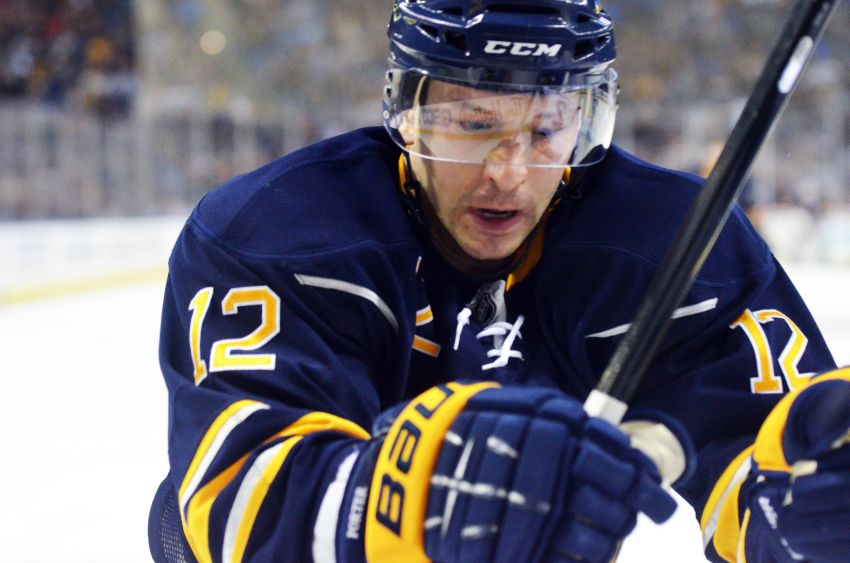 BUFFALO – Ten years ago, Ron Rolston wanted Kevin Porter to come play at Boston College. The interim Sabres coach, then an NCAA assistant, recruited the teenage hockey star, even talked to his father a little bit.

Their paths crossed again in July.

Porter’s career had hit a rut after Colorado scratched him 43 times in 2011-12. The Sabres needed a slick veteran leader for Rolston’s Rochester Americans.

Porter had a few options. But Rolston finally had his man.

“This just seemed like it would be the best fit,” Porter said Sunday prior to the Sabres’ 3-1 win over the Tampa Bay Lightning inside the First Niagara Center. “It’s worked out really well, better than I had hoped. He has confidence in me and that gives me more confidence to play.”

Rolston immediately named Porter captain. The Sabres summoned the 27-year-old from their AHL affiliate hours after they promoted Rolston on Feb. 20.

Porter has played all 26 games since then, quickly becoming one of Rolston’s most trusted forwards.

His second-period goal – a nifty redirection in front of Brian Flynn’s pass – extended his point streak to a career-high four games. Porter has four goals and seven points in the last seven contests. He had just two assists in his first 19 appearances.

“I wasn’t even getting too many chances,” Porter said after skating a season-high 18:56. “It seems like I’m getting more chances and our line’s playing well. We’re getting chances, they’re going in.”

Right now, he’s the Sabres’ No. 2 center between Flynn and Steve Ott.

“He’s just competitive,” Rolston said about Porter, “and he brings the same thing every night for us. I think he’s earned everything that he’s gotten so far. He’s been a big positive … since I’ve been here and just the consistency that he’s played with and the compete every night.”

Porter traces that consistency and his confidence to his 48-game run with the Amerks. In his first AHL stint since 2009-10, the 2008 Hobey Baker winner morphed into a star again, scoring 15 goals and 44 points.

“You go down there and you put up some points and you’re playing well,” Porter said. “You just get that little bit of confidence you need to step up your game a little bit, and I think that helps. And I think playing for Ron down there really helped, showed him I can play and he can trust me and have confidence in me. He’s shown that by giving me ice time here.”

Playing center also helps. Porter had switched between the middle and the wing for years.

“I feel comfortable playing center,” Porter said. “This is the first time I’ve played center for a long, extended period of time. So it’s good to have the coach have confidence in me and that gives me a little bit more confidence.

“The past month or month and a half I’ve felt pretty comfortable.”

Sabres rookie Chad Ruhwedel missed about eight minutes of his second NHL game after a high stick from an opponent opened up a cut on his chin.

Mike Weber, Ruhwedel’s defense partner, joked the youngster “misses the cage” he wore on his helmet just a few days ago in college.

Notes: Rolston said the Sabres haven’t decided where to send 18-year-old center Mikhail Grigorenko, whose junior season just ended. The slick prospect can return to the Sabres or go to the AHL. … The Sabres used the same lineup as Saturday’s 1-0 win over Philadelphia, dressing tough guy John Scott instead of Luke Adam. Scott skated a season-high 10:43.