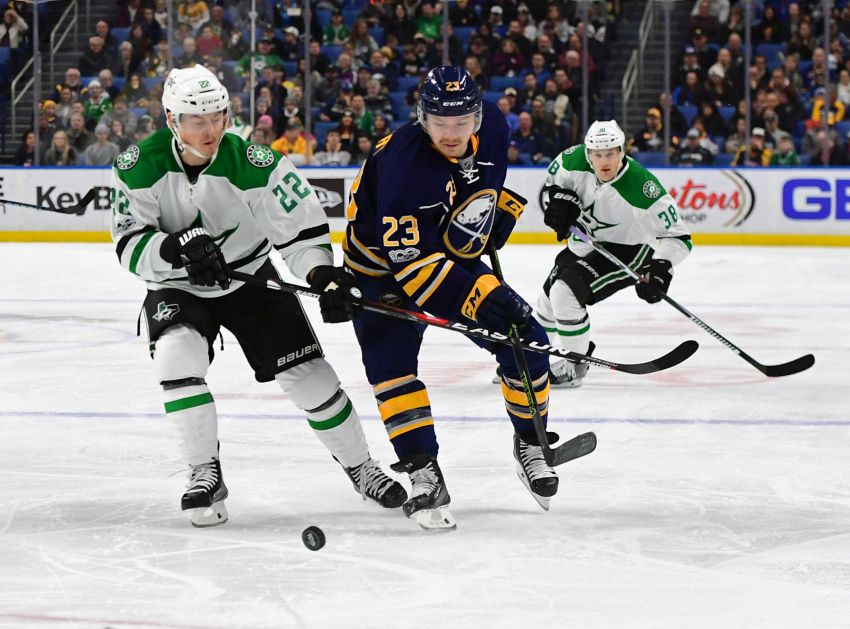 In eight years in the NHL, Buffalo Sabres winger Evander Kane said he has never seen the standings so crunched barely halfway through the season.

Following the three-day NHL All-Star break, the Sabres start the stretch run tonight at the Montreal Canadiens in seventh place, tied with the Detroit Red Wings for the fewest points in the Atlantic Division and Eastern Conference.

“You win another three games in a row, you’re probably sitting in the playoffs right now,” Kane told reporters Monday after the Sabres practiced at the Bell Centre in Montreal.

The odds, of course, are still slim – sportclubstats.com pegs them at just 10.1 percent – the Sabres will roar up the standings and grab a playoff spot. But thanks to a 7-4-1 January, their most successful month this season, the Sabres have stayed in the mix.

“We’ve put ourselves in a position to do something after losing a lot of games that we needed,” Sabres center Jack Eichel said. “We’re still in a position to make a run. We just need to be rattling off wins here. We can’t lose two in a row here.”

Realistically, the Sabres must earn about 96 points or so to secure a playoff spot. Remember, they haven’t won more than three straight games all season.

“We know we need to be on a 60-percent (point pace) from here the rest of the way out,” Sabres coach Dan Bylsma said.

But why might an unlikely run be doable? For the past four weeks, the Sabres, who have scored 3.3 goals a game this month, have been led by their biggest stars.

Kane has six goals in 12 games this month and 14 goals in his last 25 outings. Eichel, who scored the overtime winner in last Tuesday’s 5-4 come-from-behind triumph in Nashville, has six goals and nine points. Top center Ryan O’Reilly has two goals and 11 points in 11 games. Winger Sam Reinhart has nine points. Ace defenseman Rasmus Ristolainen has cracked the 28-minute mark six times this month.

“Going forward, if we’re going to be a successful team, it’s going to be those guys pulling the weight.”

Eichel has pulled the most weight. Since returning from a high left ankle sprain Nov. 29, the second-year star has transformed Buffalo’s offense from one of the NHL’s worst into one of its most potent. The Sabres have scored 79 goals in 27 games with Eichel, giving them the league’s 11th-best offense in that span.

“(There’s) an increase in the goal output, but also I think we’ve been a harder team to play against and been able to play with good teams the way we want to play, which is in the offensive zone and playing that direction and playing that hard,” Bylsma said. “We’ve scored more goals as a result of it, seen us come back in games.”

Winger Kyle Okposo, the Sabres’ lone NHL All-Star, was excused from Monday’s practice as he traveled back from Los Angeles.

Meanwhile, backup goalie Anders Nilsson missed the session because he returned home to Sweden during the break for personal reasons, Bylsma said. He was expected back later Monday.