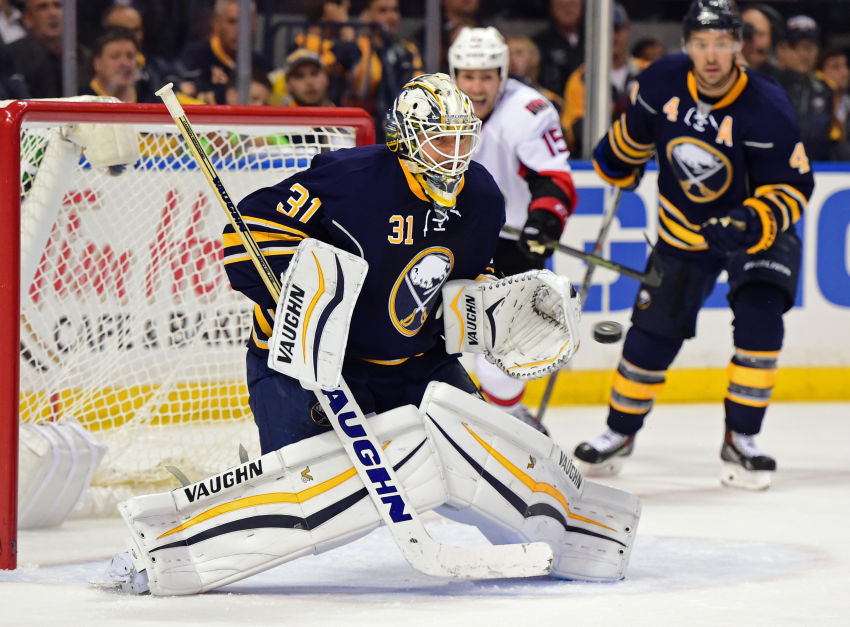 BUFFALO – Considering Chad Johnson is the only healthy goalie on the roster, it can be assumed the backup will start this afternoon against the Tampa Bay Lightning, Sabres coach Dan Bylsma said.

Now, the Sabres might be forced to lean heavily on Johnson, 29, a career backup with only 57 NHL appearances (48 starts).

“It is exciting,” Johnson said. “Obviously … sort of a goal of mine is to be a starting goaltender.”

Bylsma said Lehner was evaluated Friday and the Sabres will learn more about his status after he is examined today. Bylsma said following the game the Swede’s injury wasn’t short-term.

As the Sabres practiced Friday inside the First Niagara Center, Lehner, who was wearing a walking boot on his right foot after the game, watched from the bench.

Bylsma said the Sabres would recall a goalie from the Rochester Americans following their season opener Friday. Nathan Lieuwen, whose concussion history forced him to sit out most of last season, played his first regular-season game since Dec. 19. The AHL club also has Andrey Makarov.

The two youngsters only have eight combined games of NHL experience.

So what will the Sabres do if Lehner’s out for weeks or even longer? They could look outside the organization.

Johnson, an acquisition from the New York Islanders last season, hasn’t started consistently since 2012-13 with the AHL Portland Pirates. He played a career-high 27 games with the Boston Bruins in 2013-14. He was scheduled to play regularly for the Sabres in March before an ankle injury ended his season.

Johnson stopped eight of the nine shots he faced in relief in the Sabres’ 3-1 loss to the Ottawa Senators.

Sabres defenseman Mike Weber added: “(Johnson is) extremely positive, and in the same sense he’s pretty focused in and knows what he has to do to compete and win games. He’s pretty steady in there.”

With no backup recalled, goalie prospect Linus Ullmark practiced Friday. The Swede, an injured, non-roster player, underwent surgery on both hips during the offseason.

Ullmark will be reevaluated in three to five days and could be cleared to return, Bylsma said. Still, it’s highly unlikely Ullmark, a North American newcomer, would start playing in the NHL.

Bylsma on the feeling on the bench late Thursday after rookie Jack Eichel scored and an offside called nullified an Evander Kane goal: “We felt … whether it counted or not we were going to win the game, and that’s what I think is a positive. … I wish you could have been on the bench for that mindset and attitude of the team in the third period, because we believed we were going to win.”

Notes: Captain Brian Gionta (lower body) skated on his own Friday and is still day-to-day, Bylsma said. … The Sabres are still carrying two extra defensemen. “As we get closer to healthy, we probably won’t have eight for too long,” Bylsma said. Matt Donovan and Jake McCabe were scratched Thursday. … Johnson said goalie coach Andrew Allen, 39, was getting dressed to back him up after Lehner was hurt. Allen, a former professional goalie, never played in the NHL.