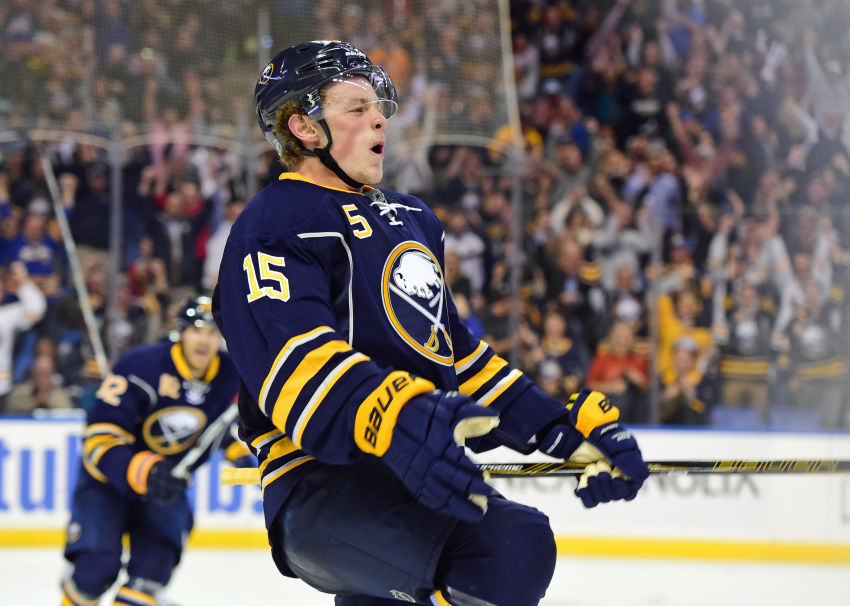 BUFFALO – For the first two periods of his NHL debut, Jack Eichel blended in among the other 10 skaters on the ice. The slick Sabres center looked like, well, a rookie playing against superior competition.

Then suddenly, like he somehow matured over a brief intermission, Eichel, 18, morphed into the best player on the ice late in the Sabres’ 3-1 opening-night loss to the Ottawa Senators on Thursday.

Eichel utilized his speed often throughout a wild third period. He was stationary when, at 9:11 and down 2-0, he slipped into the bottom of the left circle undetected on the power play, grabbed Marcus Foligno’s pass and whistled a shot by Ottawa goalie Craig Anderson.

“It’s a pretty special moment for me,” Eichel said about his first NHL goal. “I’ll remember that for the rest of my life. Today’s my dad’s birthday, I have a lot of family in town so it’s a special moment to be able to score the first one today. A win definitely would have capped the day off perfectly.”

As the capacity crowd of 19,070 fans inside the First Niagara Center erupted like the Sabres had just won a playoff game, the second overall pick threw his arms in the air and was mobbed by his teammates.

The crowd was still buzzing from Eichel’s goal when 1:23 later, Eichel’s linemate Evander Kane appeared to tie the game at 2 by stuffing the puck inside the right post.

“Some guys on the bench even looked at me and said, ‘Was it this loud before?’” Foligno said. “I said, ‘Nope, this feels like a playoff game,’ because it hasn’t been this loud in a couple years.”

But the deafening roar was quickly quieted by a coach’s review, a new wrinkle this season, the Senators called.

Following a lengthy look, officials ruled Zemgus Girgensons entered the zone just before a teammate and was offside.

The goal came off the board, the crowd booed wildly and the Sabres lost most of their momentum.

“I was surprised it took that long tonight, to be honest,” Bylsma said. “I heard pretty early on it looked offside.”

Girgensons added: “It was a close but it was the right call.”

The Sabres lost more than the game. Starting goalie Robin Lehner left 27:30 into the contest when he appeared to hurt his left leg innocently sliding in his crease.

Backup Chad Johnson replaced Lehner, who was seen leaving the rink with a walking boot on his right leg.

“You could see he was favoring his left side going off the ice,” Bylsma said. “There’s going to be further evaluation, but at this point in time it doesn’t look like it’s short-term.”

Lehner looked shaky early, allowing the first shot in 30 seconds into his debut. A building that had been whipped into a frenzy by the pregame festivities and Eichel’s debut was quickly quieted.

The Sabres mostly trudged through the first two periods, getting outshot badly and generating little offense.

Sloppy defense. Limited scoring opportunities. It looked like last year all over again.

“We got pushed around,” Kane said. “We got outskated, outworked in the first period. We were chasing the puck.”

“Urgency,” Foligno said. “I think we were desperate. I think you kind of have to play with that.”

Eichel registered his first shot on goal 4:14 into the second period, when he drew a hooking penalty as he backhanded the puck in close. He drew another hooking penalty before his goal.

“A little bit of nerves at the beginning,” Eichel said. “First game is something you dream of your whole life. But I think as I shook them off throughout the game, started to get a little better and I think I played pretty well in the third period.”

About 12 minutes into the third, Eichel zoomed through the slot and undressed Norris Trophy winner Erik Karlsson, narrowly missing a goal.