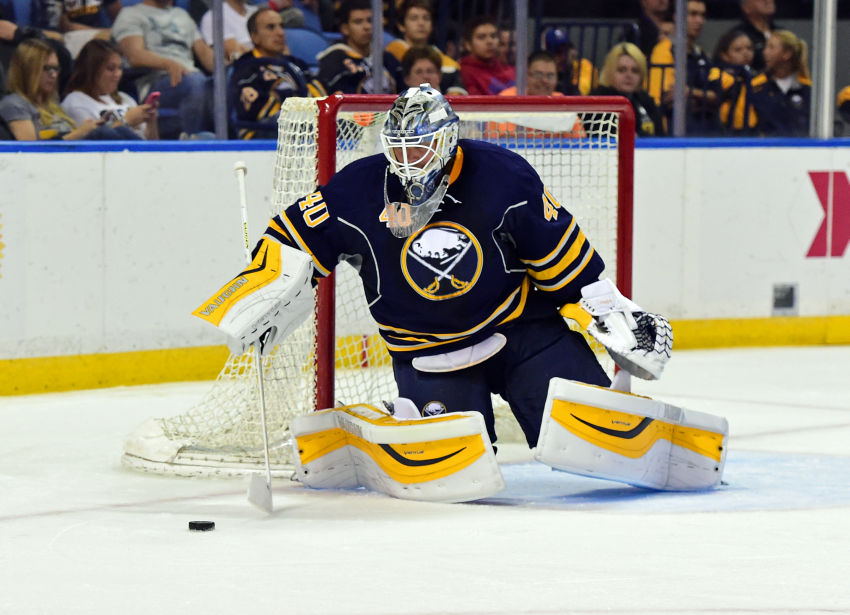 BUFFALO – For the time being at least, career backup Chad Johnson is the Sabres’ new starting goalie with Robin Lehner sidelined.

Lehner, who was hurt almost midway through Thursday’s 3-1 loss to Ottawa, was evaluated today and will be examined again Saturday. The Sabres will know more then, coach Dan Bylsma said.

As the Sabres practiced this morning inside the First Niagara Center, Lehner, who was wearing a walking boot on his right foot after the game, watched from the bench.

The Sabres will recall a goalie from Rochester following its season opener tonight, Bylsma said. Nathan Lieuwen, who has seven games of NHL experience, will start for the Americans. The AHL club also has Andrey Makarov, who played one game for the Sabres last season.

Johnson, an acquisition from the New York Islanders last season, has played 57 NHL games. He was scheduled to play regularly for the Sabres in March before suffering a season-ending ankle injury hours before his first start.

He stopped eight of the nine shots he faced in relief Thursday.

Johnson, 29, hasn’t started regularly since he played for the AHL Portland Pirates three years ago.

“It is exciting,” he said. “Obviously … sort of a goal of mine is to be a starting goaltender.”

With no backup recalled, goalie prospect Linus Ullmark practiced today. The Swede, an injured, non-roster player, underwent surgery on both hips during the offseason. Ullmark will be reevaluated in three to five days and could be cleared to return, Bylsma said. Still, it’s highly unlikely Ullmark, a North American newcomer, would start playing in the NHL.

In other news, Sabres captain Brian Gionta (lower body) skated on his own this morning and is still day-to-day, Bylsma said.