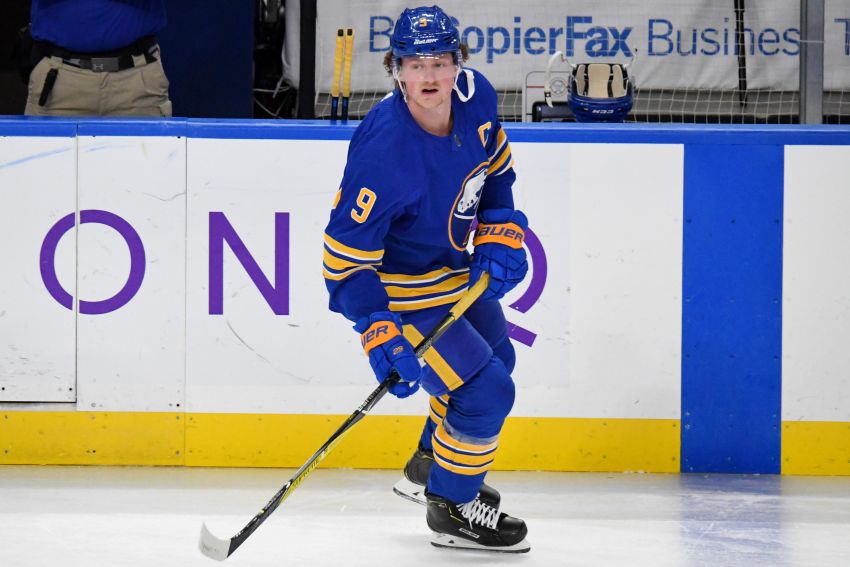 Adams won’t give in to Eichel’s demands and simply deal his best player because he wants out. The Sabres have an asset under contract.

“What’s critically important to make sure is clear that we’re in control of this process,” Adams said Thursday inside KeyBank Center. “We have a player under contract. We don’t feel any pressure. If there is a deal out there that we feel is the right thing for the Buffalo Sabres, is going to help us improve, whether it’s improve right away or improve down the road – those are all the things we weigh – we’d be open to it.

“But we’re not in a position where we feel that we’re just going to do something to do it. That just doesn’t make any sense.”

On Sunday, Eichel’s representatives, Peter Fish and Peter Donatelli, told Sportsnet’s Elliotte Friedman: “Our expectation is that Jack is going to be traded in the near future, and all of our discussions have been centered around that issue.”

Fish and Donatelli offered the statement after Adams said on Saturday he would have “no problem” if Eichel started training camp with the Sabres in September.

“I’m worried about doing what’s right for the Buffalo Sabres, and that’s why I say, I mean, I take the emotion out of it, we look at what is best for us moving forward, and if there’s something that makes sense, we’ll do it,” he said. “But what I can’t say is, ‘Oh, it has to be this time or that time’ or any sort of pressure point.”

Eichel herniated a disc in his neck March 7. On May 10, the center said he felt a “disconnect” with the Sabres over their handling of the injury.

Even if Eichel plays for the Sabres next season – that still seems unlikely – they’ll probably rank among the NHL’s bottom-feeders again.

The Sabres replaced some of their best players by signing cheap, journeymen free agents, most of them for the league minimum of $750,000. The New Jersey Devils also gifted them defenseman Will Butcher, who will make $4.1 million in 2021-22.

While Adams never uses the word, the Sabres are rebuilding. He has a vision for overhauling his team, and he refuses to deviate from it for minimal short-term gains.

“We need to build around a young core of players,” he said. “We need to provide an opportunity for these players to learn how to play in critical moments, grow up together. We need to identify players that want to be here. And we need to be excited about that.”

So far, the Sabres have signed nine free agents to one-year contracts, including five who will likely start the season in Buffalo. Only two – forward Vinnie Hinostroza ($1.05 million) and defenseman Mark Pysyk ($900,000) – make more than the league minimum.

“(Wednesday) was going to be targeted with how we did it,” Adams said. “Disciplined. (We) wanted to make sure we have flexibility, and we also wanted to make sure the people that we brought in wanted to be here. Short-term contracts, hungry, high-character, and help in the locker room with some of these younger players we have. And that’s what we accomplished.”

Re-signing Ullmark was a priority, and Adams said the Sabres made the Swede a “strong offer” and stayed in contact with him Wednesday. Ultimately, Ullmark signed a four-year, $20 million contract with the Boston Bruins.

“When he decided to go a different direction, we pivoted then,” Adams said. “We certainly looked into where the market was from certain trade scenarios, but for us giving up assets wasn’t something we were comfortable with at that point.”

Clearly, the Sabres did not want to commit four years to Ullmark with top goalie prospect Ukko-Pekka Luukkonen perhaps a season or two away from cracking the NHL. So they signed Craig Anderson, 40, and Aaron Dell, 32, to one-year, $750,000 contracts.

“We’re excited about the players we added there in net,” Adams said.

Right now, the Sabres have a projected salary cap hit of just $52,233,333, according to capfriendly.com. Adams, who said the Sabres don’t have an internal cap, doesn’t see a problem reaching the $60.2 million salary floor.

“There’s the certain financial flexibility to when we are ready to strike, and we are in a position that we’ve got this core, we are ready to move forward as a team, you have the flexibility financially to go and make those decisions,” he said of the low cap figure. “And that, to me, we know where we are right now. We know what we have to build toward. But if you get yourself in a position where you can’t take a step forward, however long that time is down the road, you’re not going to be able strike.”

Defenseman Rasmus Dahlin, the biggest of the Sabres’ five restricted free agents, could strike it rich soon. Adams said he has had “productive conversations” with representatives from the Swede’s agency, Newport Sports.

Adams said the Sabres are open to signing Dahlin, 21, to a short- or long-term contract.

“We’ve said to them we’re open to any type of scenario,” he said. “I think Rasmus has been a player that from the day he stepped into this league, everybody sees the gifts he has. He’s excited to be here.”