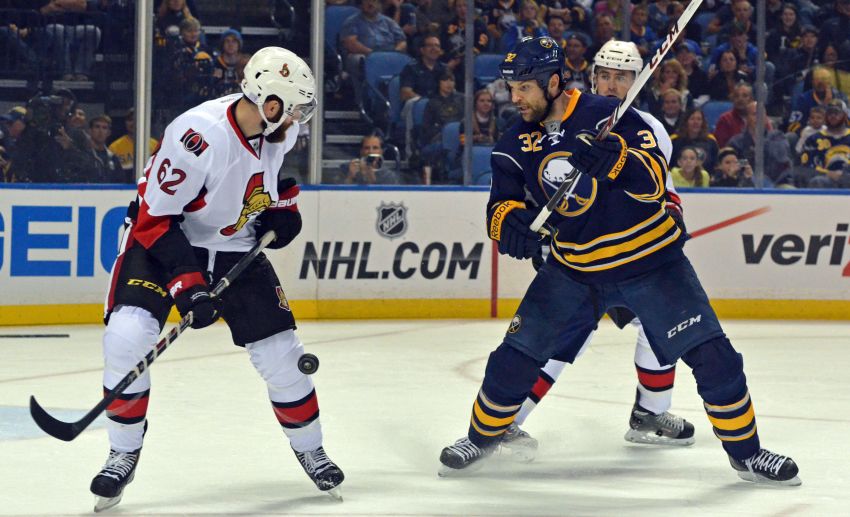 BUFFALO – Ever since Sabres tough guy John Scott ignited a brawl going after Toronto Maple Leafs star Phil Kessel 54 days ago, tonight’s tilt between longtime rivals has been circled on the schedule.

Based on what both teams said Thursday, don’t expect any craziness to transpire as the home-and-home set begins.

“If they want to carry it over, that’s all they can do about it,” said interim Sabres coach Ted Nolan, who will make his debut tonight. “I have nothing to carry over. I wasn’t there.”

Leafs coach Randy Carlyle was there. His ill-advised decision to put skill on the ice instead of grit left his players trying to pry Scott from Kessel, who responded by whacking the enforcer.

Still, Carlyle wants to leave it in the past.

“It happened a long time ago,” Carlyle said. “It’s things like that that we don’t like to remember, and it’s time to move on from that. We’re here to play a hockey game that’s going to give us the best chance for success.

Sabres captain Steve Ott added: “I think all that stuff’s out the window. We need to focus on getting this team going. Obviously, I’m sure they’re thinking the same thing. It’s going to be a strong game.”

Scott responded after Jamie Devane broke Corey Tropp’s jaw in a fight. The enforcer will play tonight, his first appearance since his seven-game suspension for hitting Boston’s Loui Eriksson in the head ended.

“I think it’s getting blown out of proportion, this game,” Scott said.

Nolan, of course, loves enforcers and rough-and-tumble hockey. But Scott said Nolan wants him “to be a hockey player, be responsible.”

“He said he wants me to play my game, go out there and hit, actually not be too concerned with fighting and all that stuff,” Scott said.

Fresh off a long suspension, Scott said doesn’t care if the NHL’s watching him.

“If they want to worry about that, that’s them,” Scott said. “I’m going to play my game. I’m not worried about it at all. Nothing has changed in my game and my eyes, maybe just be a little careful hitting at times.”

Rookie Zemgus Girgensons, a winger all season, will play center Friday, said Nolan, who coached the 19-year-old with the Latvian national team. Girgensons skated between Ott and Tyler Ennis on Thursday.

Nolan said he’s done some “research” and plans to talk with Pat LaFontaine, the new president of hockey operations, about Patrick Kaleta. The Sabres recently assigned the agitating winger to the AHL to develop a calmer style following several suspensions.

According to the Pittsburgh Tribune-Review’s Rob Rossi, the Penguins will grant the Sabres permission to speak with assistant general manager Jason Botterill if they want to interview him.

LaFontaine is looking for a replacement for Darcy Regier, who was fired Wednesday. Botterill played briefly for the Sabres last decade.

Nolan doesn’t seem to like the idea of keeping four teenagers on the roster.

“We have to tread to our water smoothly here and see who can mentally sustain that type of pressure on a daily basis, and we’ll make some kind of adjustment,” Nolan said. “Because we send them down to junior or send them back to the minors, that doesn’t deflect what we think about them. It’s how we want them to be a year or two years from now.”

Center Mikhail Grigorenko, one of those teenagers, was a spare player Thursday.

Mike Weber (broken thumb) wasn’t cleared to play earlier this week and has to speak to the doctor again. The defenseman’s sporting a splint and said he feels fine.

The Leafs will be missing center Nazem Kadri, who has been suspended three games for “recklessly” colliding with Minnesota goalie Niklas Backstrom.