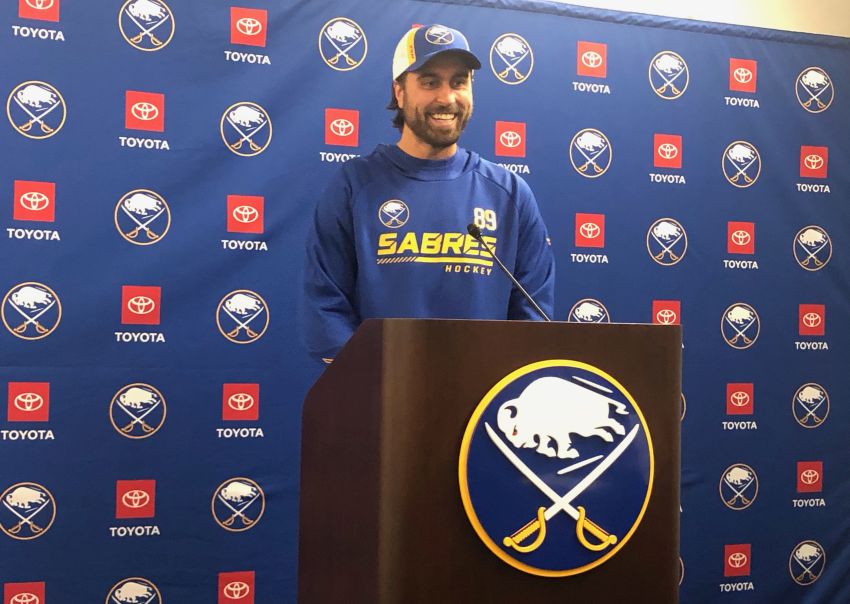 Alex Tuch, shown here in November, is fulfilling a dream by playing for Buffalo. ©2021

BUFFALO – The result doesn’t matter. That the undermanned Sabres lost 4-3, even to the reeling New Jersey Devils, wasn’t surprising. The rebuilding team has six players in the NHL’s COVID-19 protocol and played its first game in 12 days.

Wednesday was about the debuts of Alex Tuch, Peyton Krebs, JJ Peterka and what their presence represents for the Sabres’ future.

After a decade of futility, the Sabres finally seem to be adding the right pieces, and Wednesday they showed off three of them.

Players like center Tage Thompson, who has experienced a lot in just four seasons here, feels something positive happening.

“It’s obviously trending in the right direction,” said Thompson, who scored the first of his two goals against New Jersey off a Tuch feed, ending a 10-game drought. “I think everyone in the room feels that. It’s a fun atmosphere to be a part of. I think everybody in the room believes in each other and believes in what we see for ourselves in the future in terms of a team, organization.

“I think everyone wants to be a part of that, and I think a lot of guys have a lot of things they want to prove personally and as a group. It’s good when you get guys like that who play with a chip on their shoulder and want to prove something. It’s a dangerous thing.”

The affable Tuch, 25, grew up in Baldwinsville rooting for his beloved Sabres and has often expressed his excitement since arriving almost two months ago. Following his first game this season – he underwent offseason shoulder surgery while a member of the Vegas Golden Knights – he couldn’t stop smiling.

“Better than expected, honestly,” Tuch said of his debut. “It was a dream come true. We didn’t get the result we wanted tonight and that was my biggest concern, not only playing for the Sabres but trying to get a win with the guys in the locker room.”

After falling behind 2-0 in the first period, Tuch ignited the Sabres and the crowd of 11,511 fans inside KeyBank Center 33 seconds into the second, feeding Thompson a pass from the point he redirected in front. Thompson’s breakaway goal tied it at 3:17.

While the play hardly showcased the best talents of Tuch and Thompson, it could be the first of many goals they combine for in the coming years.

“He’s awesome,” Thompson said of the 6-foot-4 Tuch. “He can certainly fly, he’s really strong on pucks. He’s really fun to play with. Obviously, he’s got tremendous skill and he’s proven he can produce in the league and play big. Playing with someone like that opens up a lot of space out there.”

“There was a ton of emotion and excitement in him that’s been building for a long time,” Ellis said of Tuch. “You get into games like this, especially after a long layoff for him, you’re going to right that high of emotion and it’s going to hit a certain point where it drops off a little bit just in terms of fatigue and the grind of the game.

“But I thought Tuchy’s energy alongside Tommer and some of the speed that Peterka brought to them, you see what makes Tuchy a special player, his ability to track pucks, get above pucks, big body with speed that’s able to hang onto things. You can see some of those attributes build and I think him alongside Tommer showed glimmers of that.”

The more memorable big league debut, however, turned out to be defenseman Ethan Prow, who scored the Sabres’ third goal 14:38 into the third period.

Prow, 29, was recalled to the taxi squad Wednesday morning before being added to the active roster before the game.

The St. Cloud State product pinched in to the front, burying Olofsson’s rebound.

“I just tried to get it back on the net and I found a hole,” Prow said. “And after that point I don’t remember anything.”

The Sabres are scheduled to play a road game tonight against the New York Islanders, who are battling their own COVID problems.