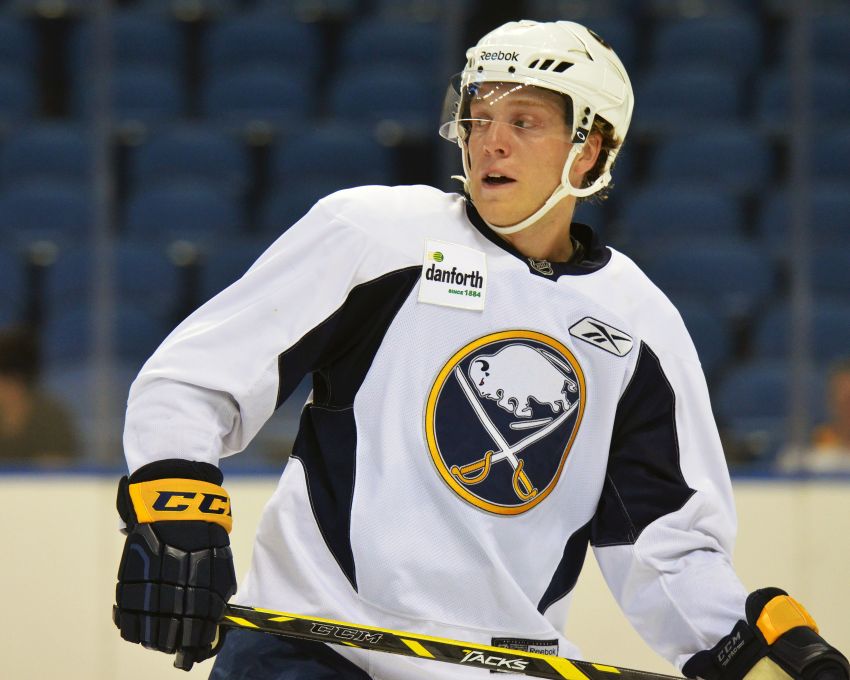 Two years later, after Caggiula won a national championship and earned NCAA Tournament MVP honors, the Sabres pursued him as a free agent before he chose the Edmonton Oilers.

This afternoon, Caggiula joined the Sabres after they claimed him on waivers from the Arizona Coyotes.

The 5-foot-10, 176-pound Caggiula, 26, has compiled 42 goals and 83 points in 249 career NHL games over five seasons. He can play center and wing and offers the Sabres some much needed-depth.

Interim Sabres coach Don Granato knows Caggiula well, having coached him with the Chicago Blackhawks in 2018-19.

“He’s got a deep passion and love for the game and he plays hard, he plays a quick game,” Granato said on a Zoom call prior to tonight’s game against the Washington Capitals at KeyBank Center. “He can play up and down the lineup, he can penalty kill, he can keep up speed-wise and push the pace with your top players. He just fits anywhere up and down the lineup.

“Teammates love him, I can tell you that. Coaches love him because he gives you everything he has and his skill level is a very good skill level. Quickness and speed are key attributes.”

Granato did not know when Caggiula will join the Sabres. The Coyotes are in Vegas today to face the Golden Knights. Granato said Caggiula will likely fly commercial, so he would be subject to NHL COVID-19 protocols.

Still, Granato will likely use Caggiula as a winger.

“I like where we’re at with our centermen from the standpoint they’re getting experience that they need, being (Casey) Mittelstadt, Cozens when he returns, I like seeing Sammy (Reinhart) there and giving him some time in that position,” he said. “So I don’t see Drake coming in and filling one of those spots right now.

“But the nice thing with Drake, when I say he’s a hockey player, he plays anywhere in any situation. He’s ready to jump, he’s competitively ready to go.”

Caggiula spent two and a half seasons with the Oilers before they traded him to the Blackhawks. He signed a one-year, $700,000 contract with Coyotes before this season.

He has compiled one goal, seven points and a minus-1 rating in 27 games this season.

In other news, Granato said forward Arttu Ruotsalainen will make his NHL debut tonight against the Washington Capitals at KeyBank Center. Assuming the Sabres don’t make a trade this afternoon, winger Steven Fogarty would be scratched.