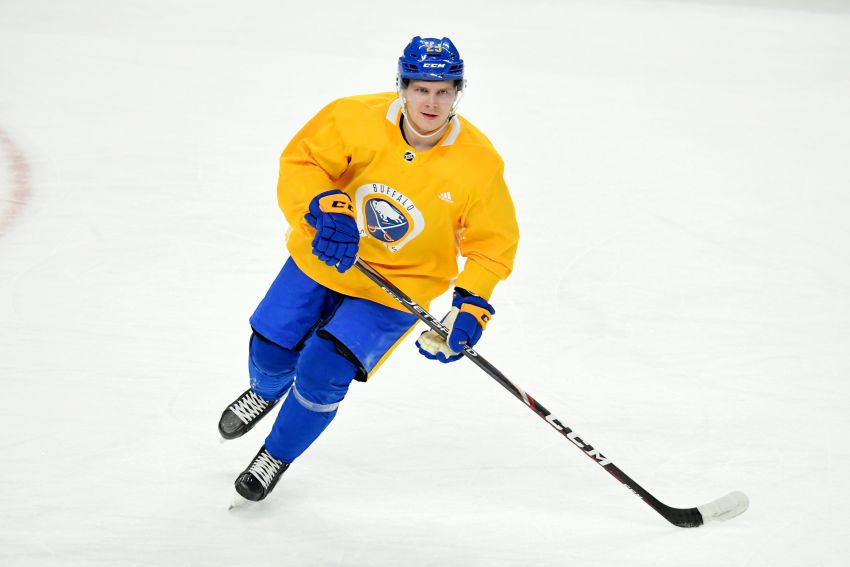 Arttu Ruotsalainen signed as a free agent with Buffalo in 2019. ©2021, Micheline Veluvolu

Ruotsalainen, 23, arrived here for training camp barely three months ago close to a finished product. So it wasn’t surprising the center earned his first NHL recall after playing just 13 games with the Rochester Americans.

“He has earned it by his work ethic, his commitment,” interim Sabres coach Don Granato said on a Zoom call of Ruotsalainen. “He’s done a nice job down there and consistently progressed.”

Granato said Ruotsalainen likely won’t play in tonight’s road game against the New Jersey Devils. He practiced Monday inside KeyBank Center as a sub at right wing for Kyle Okposo, who had a maintenance day.

Granato expects Okposo to face New Jersey. If he can’t play, Granato said Ruotsalainen would be considered as a replacement.

“It’s awesome,” Ruotsalainen said of being in the NHL. “I have been waiting for this moment for a long time now. I think I’m ready now and hopefully I get the chance.”

Ruotsalainen should make his NHL debut in the near future. The Sabres want to give some of their top prospects a look before the season ends May 8.

“We’re interested in seeing him at some point,” Granato said.

The 5-foot-8, 181-pound Ruotsalainen, who possesses a heavy shot he often utilizes from the circle, has quickly established himself as one of the Amerks’ top players.

After scoring two goals and five points in two weekend outings against the Syracuse Crunch, he has compiled five goals and a team-high 13 points this season.

But Ruotsalainen, who signed as a free agent with the Sabres in 2019, has evolved as a scorer in the AHL by paying a price and going to the dirty areas, Amerks coach Seth Appert said.

“Most of his goals in Finland were off the rush or on the flank on the power play, he certainly has a skill and the shot to do that, and that’s not going away,” he said. “But I do like that he’s creating a lot more offense from the hard areas of the ice, the inside areas … you’re going to have to get to to score in the National Hockey League.”

Ruotsalainen’s playmaking abilities have impressed Sabres winger Steven Fogarty, who skated on a line with the Finn in Rochester. Fogarty kept hearing about Ruotsalainen’s shot and all the goals he has scored.

“But … he’s a good distributor,” he said. “He can find little pockets. I think he generates a lot because maybe teams, opponents, see that he’s got that lethal shot so maybe it opens up things for his linemates.”

Ruotsalainen’s growth away from the puck and versatility – he recently played a few games as a winger – also helped him land in Buffalo.

“He’s just been really diligent about working on things that we’ve challenged him to be better at,” Appert said.

Appert said he and his staff challenged Ruotsalainen “to become a better defensive player and a harder, more physically committed, better penalty killer.”

“When you’re the leading goal scorer in the league, you’re valued more for your offense than you are for your other things,” he said. “It wasn’t that he was devoid of those things, it just becomes less of an area of focus. To make the NHL, to be a player that can stick … he’s going to have to provide secondary offense but he’s also going to have to be a good checker and an energy player and a good penalty killer and a really good guy in the faceoff circle.

“Those are things that he’s really diligently worked on in the three months here.”

Before the Amerks’ long COVID-19 pause last month, Appert briefly switched Ruotsalainen to the side, letting him play both left and right wing.

“I simply did that for him,” he said. “That did not make us a better team. I did that because I think that’s really important.”

He added: “There’s a lot more versatility to your game and you’re more useful to the organization.”