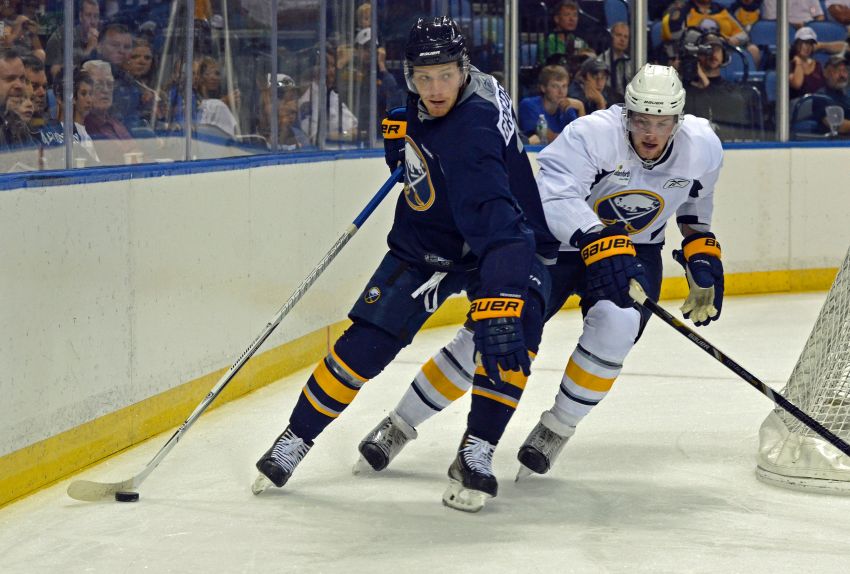 BUFFALO – The comments are significant, Mikhail Grigorenko’s most telling since joining the Sabres months after they selected him 12th overall in 2012.

In a hallway outside the First Niagara Center dressing room hours before a development camp scrimmage Tuesday, the 20-year-old Russian spoke candidly about his short career, blaming himself for his NHL struggles.

“From past experiences, I kind of realized it was probably no one’s fault but mine I didn’t stay in the NHL,” Grigorenko said. “I want to play in the best league in the world. It’s just me. No one’s going to just make me better because I was drafted (in the) first round. I just need to go out there and be the best.”

Grigorenko, of course, was jerked around for two seasons by the team’s old regime. The center started both campaigns with the Sabres before getting demoted to junior. He briefly refused his assignment to the Quebec Remparts in January.

In 43 NHL games, Grigorenko has three goals and eight points. Obviously, he wasn’t ready for primetime.

But Grigorenko spoke positively during a seven-minute chat with reporters. Clearly, he’s maturing. He’s said he’s focused on earning an NHL roster spot. Remember, last year he was given one by former general manager Darcy Regier.

Grigorenko’s doing more than talking. He’s sporting a more muscular physique. He said he’s been working out for almost two months in Quebec City and is up to 218 pounds, nine pounds heavier than last season. He wants to stay at that weight.

He wants to showcase more explosiveness on the ice.

“That’s probably what I need most, probably more explosion, faster on the ice,” Grigorenko said. “I’ll work on all the rest, too.”

The biggest key to becoming a better NHL player, he said, is thinking less.

Grigorenko will likely start 2014-15 with the Rochester Americans. Since he wasn’t old enough to play in the AHL before late last season, the Sabres had to keep him or send him go back to the Quebec Major Junior Hockey League, where he dominated.

He believes playing against men in the AHL is “going to be good for me.”

“I’m really excited for this year,” Grigorenko said. “I’m pretty sure I’m going to get way better than I did last year.”

Grigorenko played 14 total games with the Amerks in 2013-14 after his junior season ended, recording his only four assists in his first three appearances.

“I really liked the beginning,” Grigorenko said about his short AHL run. “Right off the bat, I had like four points in three games. I was playing well. Then after I didn’t get points for a few games. I’m the player that has to produce. I didn’t do it.”

“I think he was really good with the puck tonight,” Cassidy said. “I think he was way better without it than what we’ve seen in the past, and he was that way at the end of the year in Rochester. I thought he was excellent for us. He continues to make strides, and we got to keep in perspective that he’s still a young kid.”

Players have been talking about how competitive this camp is compared to other ones. Tuesday’s scrimmage before 8,725 fans, a 5-1 win for slick center Sam Reinhart’s White team against the Blue, proved that.

Winger Brendan Lemieux and defenseman Rasmus Ristolainen, two of the team’s top prospects, chirped at each other.

“Everybody’s got their niche in the game,” Cassidy said about the fight. “They got to find a way to kind of get noticed. I think if there’s one thing we’ve preached to the guys, it’s play your game and play it like it was the middle of February.”

The crowd wowed the players.

“That was awesome,” defenseman Nikita Zadorov said. “I’m always saying we have awesome fans in Buffalo.”

Sabres goalie Matt Hackett, who suffered a gruesome knee injury April 12, is out until December or January, Cassidy said.