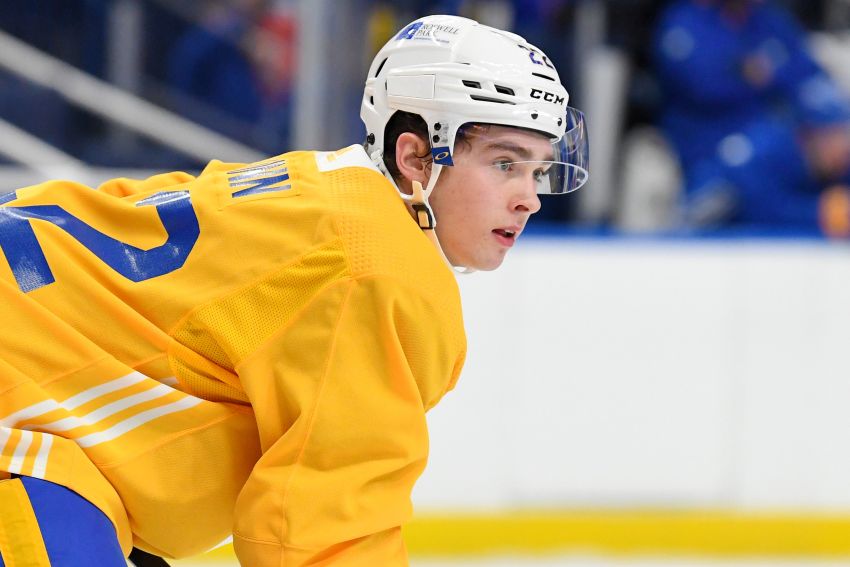 BUFFALO – On Wednesday morning, rookie Jack Quinn wasn’t among the five players the Sabres assigned to their new taxi squad.

But instead of practicing with the team’s main group at KeyBank Center, Quinn joined the taxi-squad players across the street inside LECOM Harborcenter.

Sabres coach Ralph Krueger said last week the practice groups would be adjusted every morning, so expect regular movement between them all season.

Krueger said Quinn, a winger the Sabres drafted eighth overall in October, will be assigned to the taxi squad at some point.

“We haven’t made a final decision yet on Jack,” Krueger said on a Zoom call Wednesday. “He’s done a really good job staying with us. He did skate with the taxi squad today, where we will have him positioned eventually.”

The Sabres could also send Quinn, 19, to the Rochester Americans. Normally, as a junior-age player, Quinn would be ineligible to play in the AHL. But the Ontario Hockey League hasn’t started its season. The Amerks open training camp Friday.

The NHL implemented the taxi squad this season because the COVID-19 pandemic has created the need to have extra players close by.

In other news, Krueger said center Curtis Lazar “is good to go” for tonight’s season opener against the Washington Capitals. A lower-body injury sidelined Lazar twice earlier this week.

The Sabres named Okposo an alternate captain on Wednesday to replace Marcus Johansson, who was traded to the Minnesota Wild.

Sabres center Cody Eakin experienced playing games in an arena without fans in the Edmonton bubble during the summer.

“In there you can hear the skates cracking, guys chirping,” said Eakin, who finished last season with the Winnipeg Jets. “You don’t have the fan support to give you that momentum off the kill, the power play or some zone time, but you have to generate that off the bench.

“I think there are pros and cons. You can hear linemates talking and on the other side of that you can hear guys talking back and stuff like that.”

Right now, the pandemic will prevent fans from attending games in Buffalo and throughout most of the NHL.

Captain Jack Eichel on forgetting about the Sabres’ past disappointments: “This isn’t last year or any of the past years, so that’s my mindset going into it. This is a completely new season with new players, a fresh, clean slate. So I don’t speak of past years, and I think when I’m speaking with you guys this year, I’d prefer if you didn’t as well. This is a new season and I’m not going to relate back to what’s happened in the past.”

Sabres forward Dylan Cozens has switched from No. 42 to 24. Meanwhile, forward Riley Sheahan has changed from No. 38 to 15.