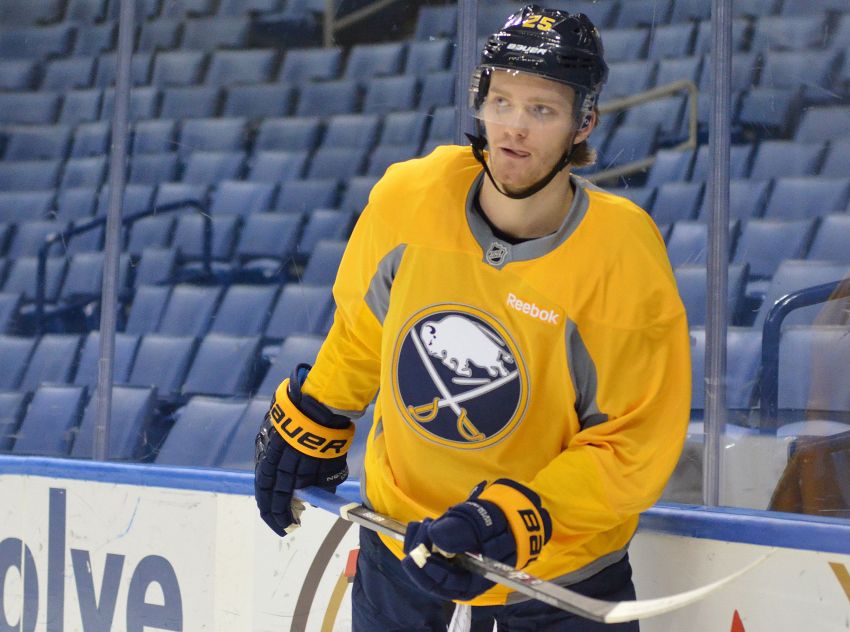 “But this is non-negotiable,” Nolan said Saturday inside the Riverside Ice Rink. “It’s one of those things that has to be done.”

The Sabres didn’t understand just how much the demotion irked the Russian center.

Grigorenko won’t be reporting to the junior club, his agent, Jay Grossman, told the Times Herald hours later. He declined further comment until they discussed the matter with the Sabres.

On his Facebook page, Grigorenko, who could get suspended, apologized for the “situation going on right now.”

“We just need to find a place for me where I can develop and be the best hockey player I can be,” he wrote.

Grigorenko wrote about his childhood, providing for his family and his gratefulness toward the Remparts, Sabres and Buffalo.

“Now I would just ask all of you guys to respect me and the time I’m taking to think about my career,” he wrote. “It might be hard to understand but it is even harder for a teenager.”

He added: “The Sabres sent him here. They feel like it’s the best option. We’re going to see what happens.”

The move was hardly surprising. Nolan hinted at it earlier this week when the world junior championship, where the Sabres sent Grigorenko for a month, ended.

Grigorenko’s been a frequent healthy scratch and has seen some fourth-line duty throughout his short career. He has three goals and eight points in 43 NHL games, including two goals and three points in 18 appearances this season.

Nolan said he met with new GM Tim Murray and president of hockey operations Pat LaFontaine about the move.

“That’s another managerial decision (for) what’s best for Grigorenko for the long-term being a Buffalo Sabre,” said Nolan, whose club plays this afternoon in Washington against the Capitals.

He added: “Development is crucial, and talking with Tim and with Pat, that’s what we really want to do is develop.”

After burning a year of his entry-level contract, the Sabres’ old regime also returned Grigorenko to junior in March before recalling him a month later. Former GM Darcy Regier then guaranteed Grigorenko an NHL roster spot during the summer.

The new regime has been trying to find a place for Grigorenko to play for months.

The NHL rejected his conditioning assignment to Rochester in November, days after LaFontaine and Nolan took over. As teenager with Canadian Hockey League eligibility, Grigorenko can’t play in AHL.

Grigorenko convinced LaFontaine and Nolan to let him play, and he made three appearances before the Sabres sent him to his third world junior tournament, an assignment Grigorenko wanted.

Nolan said he was “hoping” Grigorenko would seize the assignment to Quebec.

“There’s only a certain amount you can direct and put people in position,” he said. “But it comes down to whether they want it or not, and if he wants it enough, he wants to be here, he’ll work out.”

There is, of course, the lure of the KHL, a Russian league generally regarded as the world’s second-best. Many NHL players have returned home, including former New Jersey star, Ilya Kovalchuk, a Grossman client who left the Devils in the summer.

But Grigorenko has spoken about his strong desire to play in the NHL. He left home with his mother at 17 to play for the Remparts and learn English.

While Grigorenko has struggled in the NHL, he’s dominated junior hockey, compiling 70 goals and 139 points in 92 games with the Remparts.

Still, Boucher believes he can learn plenty in a third season.

“You can learn every day wherever you are,” he said. “Go through the roster of the Canadian and U.S. team and see how many guys played college or junior at 19. A lot of the superstars in the NHL did. There’s a lot to learn at the junior level.”

One thought on “Mikhail Grigorenko refuses to report to junior, future with Sabres unclear”