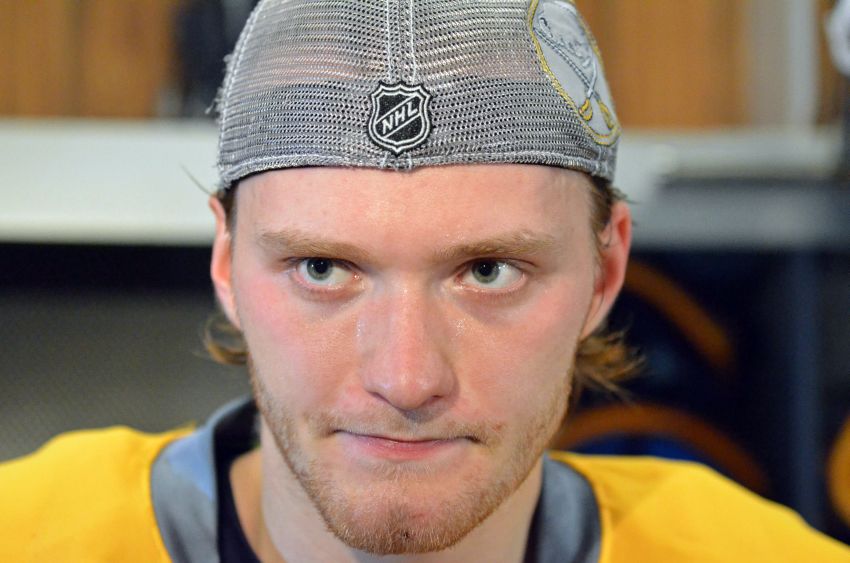 “I didn’t really think about defense or penalty kills or faceoffs or winning battles,” the 19-year-old prospect said Thursday prior to sitting out the Sabres’ 2-1 shootout loss to the Florida Panthers as a healthy scratch.

“I played a really good two-way game,” said Grigorenko, who returned to the Sabres on Thursday after more than a month away. “I played good defensively. I was playing penalty kill. I thought I was more of a complete player. I was doing a lot of good stuff for the team.”

Grigorenko said he became “more a leader of a team.”

“I was leading by example,” he said. “Pretty much, all the players knew I was from the NHL. They were just looking up to me. I was really happy about the experience.”

He added: “I could feel they were looking at me to score a goal or something or do something on the ice good.”

Interim Sabres coach Ted Nolan wouldn’t play Grigorenko, a healthy scratch for the 12th time this season, because he got in late Wednesday from Europe.

Nolan and president of hockey operations Pat LaFontaine clearly don’t think Grigorenko’s ready for the NHL. They were hoping his world junior assignment would give him some much-need confidence and playing time.

“He just came back from Europe and, in all honesty, I got here (Wednesday) night and we started talking about scenarios and we’re past the point of having four different scenarios,” said new Sabres general manager Tim Murray, who took over Thursday. “There’s two scenarios and we’ll decide on one of those two very quickly.”

That other option is almost certainly sending him back to junior.

Naturally, Grigorenko said he wants to stay in the NHL.

“I did everything they wanted me to do,” he said. “I didn’t really complain much. I just knew it was the best thing at the moment. Hopefully, I’m done with traveling. I just want to stay here.”

Despite sitting so much and moving around, Grigorenko thinks “a lot of young guys would’ve loved to be in my situation.”

“It’s a little bit harder than some guys in the NHL,” he said. “But it’s still better than being in juniors.”

Notes: Tuesday’s snow postponement against Carolina has been rescheduled for Feb. 25 at the FNC, the last day of the NHL’s Olympic break. … Sabres defenseman Brayden McNabb has been named to the AHL All-Star team. … Former Sabres defenseman Brian Campbell played his 800th NHL game. … Sabres defenseman Tyler Myers served the first contest of his three-game suspension for hitting Dainius Zubrus in the head. … The Sabres have placed winger Drew Stafford (upper body) on injured reserve.