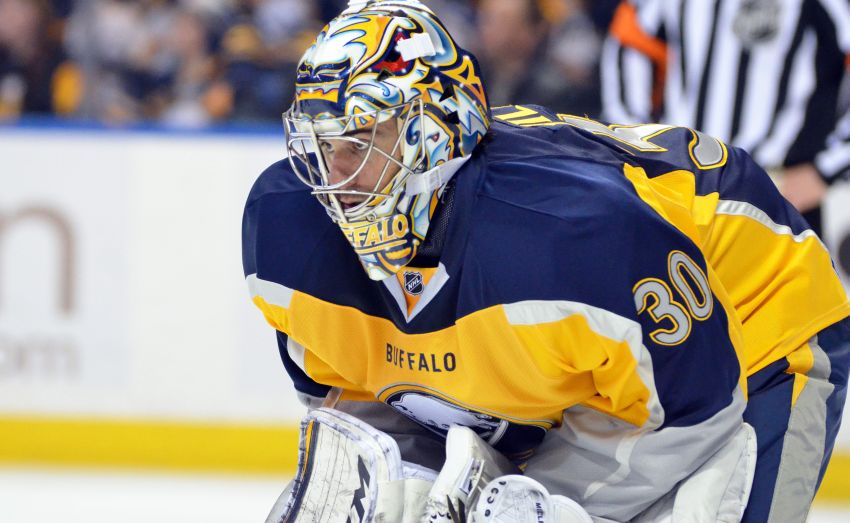 Ryan Miller is getting ready to play for Team USA at the Sochi Games. ©2014, Dan Hickling, Olean Times Herald

“It’s nice of him,” Miller, an unrestricted free agent following the season, said Saturday inside the Riverside Ice Rink. “I still need to kind of see what’s going on in the bigger picture.”

Miller said he still hasn’t spoken to new general manager Tim Murray, who took over Thursday. He last chatted with LaFontaine shortly after he became president of hockey operations in mid-November.

“He was just getting his bearing and getting a look around,” Miller said after the Sabres prepared for this afternoon’s tilt in Washington. “So I guess it’s time to talk to him again, see what’s going on his side of things. I’m going to wait to have any conversations with those guys before I start getting too far along.”

The clock could be ticking on Miller’s Sabres career. The NHL trade deadline hits March 5.

The 33-year-old, one of league’s best netminders, is enjoying a terrific season despite the Sabres’ struggles. Teams surely covet him.

Miller only knows about Murray from “media reports.”

“I haven’t had a chance to meet him,” he said. “It seems like he’s put in a lot of time just evaluating talent. It’s a good place to start. He’s been around some good organizations. Let’s see what direction he wants to take it and go from there.”

Miller has said he wants actions, not words, from the Sabres. He doesn’t have a timeline to speak with the new regime. He begins a two-week Olympic assignment as one of Team USA’s goalie for the Sochi Games early next month.

“It’s on the team’s timeline, I guess, because we only have a week after that until the trade deadline (following the Olympics),” Miller said. “It’s up to them how they want to handle it. Either way, I’m fine. (I’m) professional. I’ll go out and do my job. Olympics, I can definitely make that something separate.

“(I’m) just trying to use these next few weeks to kind of see where we’re at with things but also play some hockey. I need to keep myself in a good place and probably have some games ahead of me where I got to work in and push to have a starting job over in Sochi.”

“Kind of an odd week for me,” Miller said.

With the Sabres off Friday and the First Niagara Center booked, Miller tried looking for ice at local rinks but couldn’t find any.

It’ll be hard for Miller to replicate his dynamic Dec. 29 outing against the Capitals, when he made 49 saves and stopped all six shooters in a 2-1 shootout win, this afternoon in Washington. Superstar Alex Ovechkin pumped 12 shots on Miller last meeting.

That performance might’ve been the best of Miller’s 530-game career.

“Just have to be disciplined,” Miller said about what the Sabres must do today. “It’s up to the boys in front of me to do their job. I’ll worry about mine. I’ll clean up everything I can and try to be there for them.”

In other news, Nolan said he hasn’t had any lengthy discussions with Murray about his future. Murray told a Canadian radio station Friday that Nolan probably wouldn’t have the interim tag much longer.

“I mentioned before, one of these days I hope it does,” Nolan said about the tag getting removed. “But it’s not one of my things I’m thinking about. I’m trying to get this team better right now.”

He added: “We had brief discussions about it but not necessarily at it.”

“He’s direct,” Nolan said. “He knows people. He knows hockey players. As a coach, you want a person that’s going to load your arsenal up with some good talent. The only thing we have to do down the road is open up the gateway to development.”

Sabres defenseman Mike Weber called Nolan “an extremely passionate coach” and was happy to hear he should be sticking around.

“The results might not be there every night, but true hockey fans and true hockey people can see how far we’re coming and how hard we’re battling now,” said Weber, who was recently awarded a temporary assistant captaincy by Nolan.

With centers Cody Hodgson and Ville Leino healthy, the Sabres sent Johan Larsson to Rochester on Saturday. Both will play this afternoon, Nolan said.

“We just need him on a consistent basis to get those 22, 24 minutes a game,” Nolan said about Larsson.

Hodgson, out the last eight games, was injured blocking a shot Dec. 21.

“I don’t really know how to explain it, just unlucky, I guess,” Hodgson said.

“You don’t want players to get hurt,” Nolan said about Leino. “But once in a while when they do they rest their bodies and they come back with some renewed energy.”