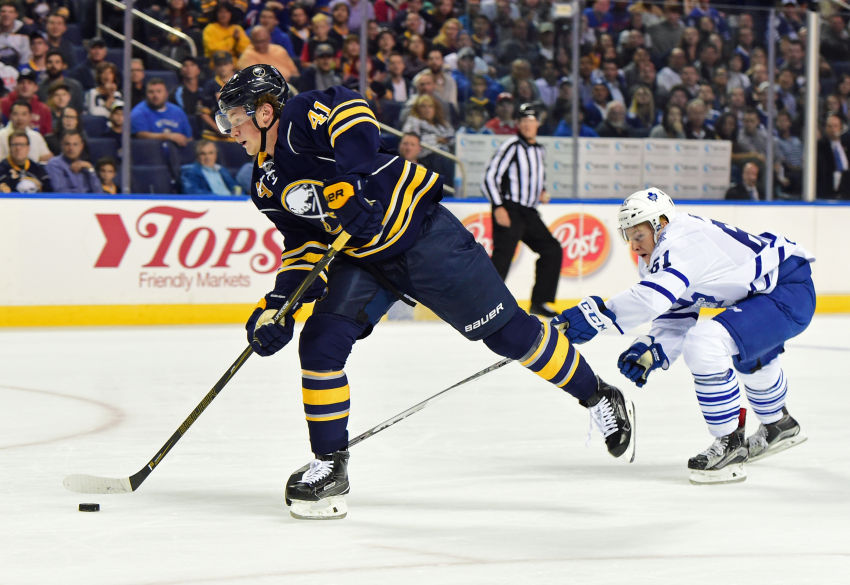 “In about half a second, it was clear it was going to be a breakaway,” Sabres coach Dan Bylsma said.

The 17,357 fans inside the First Niagara Center, such a quiet building in recent seasons, erupted when Eichel whistled a quick wrist shot by Toronto goalie Jonathan Bernier 13:48 into the contest.

“I could hear them starting to get going as I was breaking away,” Eichel said following the Sabres’ fourth win in five games. “I was just praying I didn’t miss.”

Goalie Robin Lehner, fresh off two shaky 40-minute outings, his first appearances since a scary concussion in February, looked sharp throughout his complete game, 26-save shutout.

“The other games, too, I felt good,” Lehner said. “It’s been a few details I’ve been working on, just getting into the game reads and stuff. I felt (calmer) today.”

The Sabres expect Lehner, who began the game with a ghastly 4.50 goals-against average and a .864 save percentage, will be their opening-night starter in eight days.

“There’s nothing wrong with my confidence,” Lehner said. “I can go through tough stretches. I’m still a confident guy.”

Tuesday’s performance – Lehner made 14 saves in the third period, including some nifty stops – might’ve alleviated any concerns Bylsma had.

“I thought it was his best game by far in being solid, stayed in the net, stayed poised a lot,” Bylsma said.

Rookie winger Evan Rodrigues, Eichel’s linemate at Boston University last season, scored two goals. While the undrafted free agent might be sent down in the coming days, he appears to have put himself in line for an early recall.

“It’s definitely huge for my confidence,” Rodrigues said. “I’m just coming to the rink every day and trying to make it hard for the coaches to make a decision on me.”

The Sabres must make a personnel decision after Leafs captain Dion Phaneuf’s wicked open-ice hit laid out rookie Brendan Guhle, who left the game with a suspected concussion.

“I don’t have an update other than it wasn’t prudent to put him back on the ice,” Bylsma said.

Phaneuf caught Guhle with his head down leaving the Buffalo zone, and the neophyte paid dearly.

Bylsma said the Sabres need to find another one for Thursday’s exhibition game in Minnesota. It was unclear if they would recall one or sign one off the street.

Guhle, the 51st overall pick in June, had become more than an impressive youngster getting a long look before going back to junior. With so many injuries, he had a real chance to make the team out of camp. Now, he might begin the NHL season on injured reserve.

Prior to the game, Guhle, who played his fourth preseason contest, said he “definitely” saw an opportunity with the Sabres.

“There’s some injuries now, whatnot,” he said. “I’m not looking too far ahead of myself.”

The Sabres had some good news on defense, however. Rasmus Ristolainen, sidelined most of training camp with a lower-body injury, skated a game-high 23 minutes, 32 seconds in his season debut.

“That’s an NHL player out there,” Bylsma said.

Matt Moulson, who played with Eichel and captain Brian Gionta, scored the Sabres’ other goal.