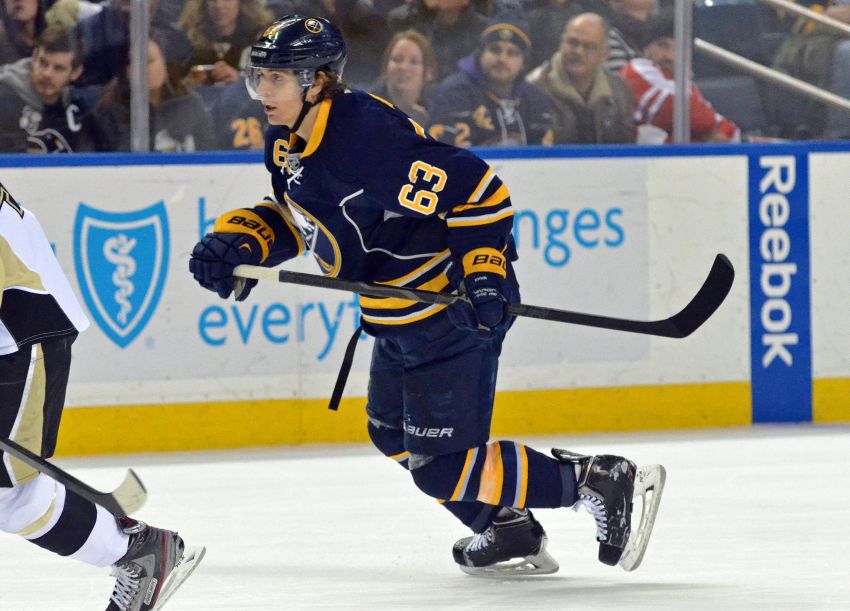 BUFFALO – Tyler Ennis said he recently stopped thinking on the ice. That isn’t a bad thing, though. The slick Sabres center has just been playing more instinctively under interim coach Ted Nolan, allowing his natural talents to take over these past few months.

It’s showing on the score sheet. With an assist on Drew Stafford’s first-period goal in Wednesday’s 5-1 loss to the Pittsburgh Penguins, Ennis has four goals and 12 points in the last 13 games.

“That’s the biggest thing. I don’t have to think,” Ennis said earlier this week inside the First Niagara Center. “I’m a little more instinctive. When I start thinking about Xs and Os, that’s when I start to stop moving my feet and stop making plays. I need to play my game and want the puck and make plays with the puck.”

Nolan said you can’t harness someone as talented as Ennis.

“To … say, ‘You have to be at this place’ is limiting his ability,” he said. “We kind of took the reins off and said, ‘You just have to make sure you’re aware defensively.’”

Ennis has made no secret he wants to be a No. 1 center badly, a goal he believes he’s working toward.

“I think recently it’s just confidence,” Ennis said. “Yeah, I have that desire in my game I want to take it to an extra level. I feel like I’m working my way up there.”

Letting Ennis loose has unleashed a physical side the 5-foot-9, 169-pound speedster rarely showcased earlier in his career.

Hits can be a questionable stat, but Ennis had 51 in 35 games under Nolan entering Wednesday. He recorded 18 in 20 under former coach Ron Rolston.

Everything’s a domino effect, Ennis said. With more confidence, he started “playing extra hard.” Then “you start rolling and the game just starts flowing a lot more,” he said.

Nolan said Ennis’ ability to finish his checks – even if he’s just separating his man from the puck – has helped buoy him.

To Nolan, Ennis is a better player today than when he replaced Rolston on Nov. 13.

Ennis said a tenacious style has “been branded in me my whole life.” His father taught him to have a chip on his shoulder. So did getting cut from a few teams, most notably a bantam club in his native Edmonton 10 years ago.

Believe it or not, that team also cut 5-foot-9 Minnesota defenseman Jared Spurgeon.

Why? Both were very small.

“We were pretty good, though,” Ennis said. “It was extra rattling. That’s kind of where the chip on the shoulder comes from.”

He added: “I’ve always been the small guy. I’ve kind of been forced to play extra hard and prove people wrong.”

“They’ve showed some interest,” Murray said. “They haven’t done anything yet to change that scenario. Talks are going on for a lot of players. There’s a lot of ideas being thrown about here the last few days. As of right now, nothing has changed with Ryan.”

He also said: “I’m willing to listen on every single player, so I’m certainly listening on Ryan.”

The 24-year-old could play tonight in Ottawa, Nolan said.

The two could face each other again soon at the Sochi Games.

Naturally, Crosby, who works out with Miller sometimes during the summer, doesn’t talk about the past exploits.

“It’s the past,” Crosby said. “We’re days away from the Olympics in Russia. Maybe after our careers it’s something we can talk about. … We have to move on and try to accomplish other things.”