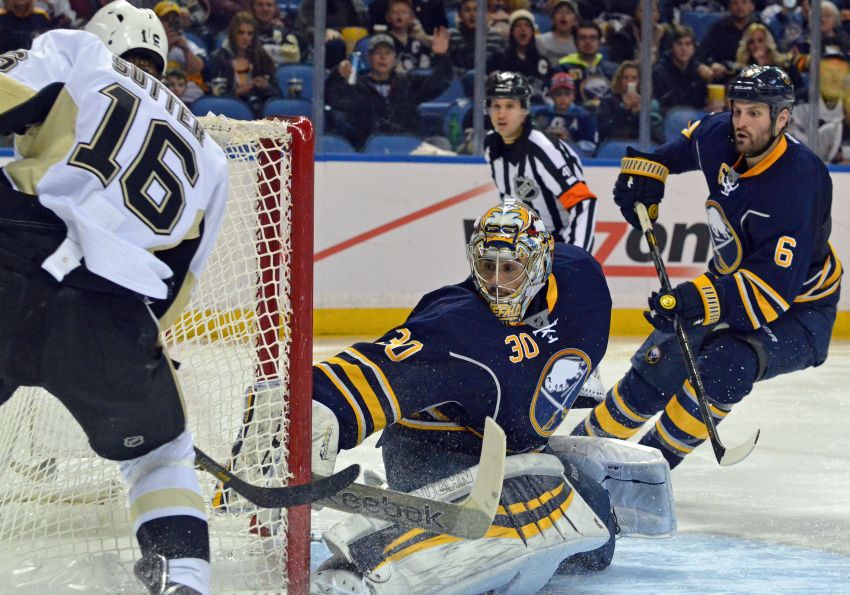 Bylsma, Team USA’s coach for the upcoming Sochi Games, knows what most NHL observers know: Miller’s played splendidly most of the season under the most trying of circumstances.

The Sabres’ third straight loss illustrated that. Once again, they couldn’t support Miller, an unrestricted free agent following the season who might’ve been playing his last home game.

Following a slow start, the slick, superstar-laden Penguins dominated the Sabres before 18,408 fans, sending the league’s worst team to its 10th loss in the last 12 games (2-7-3).

“It had nothing to do with Ryan tonight,” interim Sabres coach Ted Nolan said. “It was the guys in front of him. Our team, we need everyone in front him. We had a couple guys no-show tonight. Playing one of the better teams in the league, you think they would be excited to play, and a couple weren’t.”

Not long ago, Sabres became a strong home team, compiling a 6-0-1 stretch inside the First Niagara Center. Now, they’re 0-5-3 in their last eight games here.

This stretch, the roughest in months, is a test of character, Nolan said.

“You find out about people in difficult times,” he said. “When things are going OK, you camouflage certain traits. Things like this, you find out who really wants to compete and who doesn’t.”

The Sabres started well enough. Drew Stafford’s fifth goal in six games put them up 1-0 5:58 in.

But Harry Zolnierczyk tied it later. Then the Penguins’ stars dominated during the second period.

Sidney Crosby zoomed down the left wing and scored on the power play at 2:08, scorching Brian Flynn and Mike Weber, who endured a rough night with defense partner Jamie McBain.

Evgeni Malkin scored a breakaway goal 17:48, blowing by McBain. At that point, the game was over.

“We kind of left him out to dry a little bit,” McBain said about Miller.

“When you have a soft dump-in and Malkin gets the puck, he was looking for a breakaway,” he said. “That’s just bad, bad playing on our part.”

Miller, who had little to say following the game, said he didn’t set up well for Malkin.

Steve Ott bristled at a question about the Sabres losing their passion during the third period, when Brian Gibbons and James Neal scored.

“It’s not passion,” the captain said.

Then what is it?

“That’s a good team over there that’s obviously playing extremely well,” Ott said. “We shot ourselves in the foot with a couple of turnovers in the second. But there’s no lack of passion. Every guy’s out there working hard trying to compete.”

Of course, Miller, who made 29 saves, has bailed the Sabres out all season when they’ve had duds like Wednesday’s.

“He’s played really well in some different circumstances,” he said. “He doesn’t have a lot of wins to go with how well he’s played, but his save percentage and saves he’s made, he’s played maybe some of his best hockey.”

The Sabres play tonight in Ottawa, their final game before the Olympic break. Miller doesn’t know if he’ll start.

The team presented its five Olympians, including Nolan, who’s coaching Latvia, with their country’s jersey before the game.