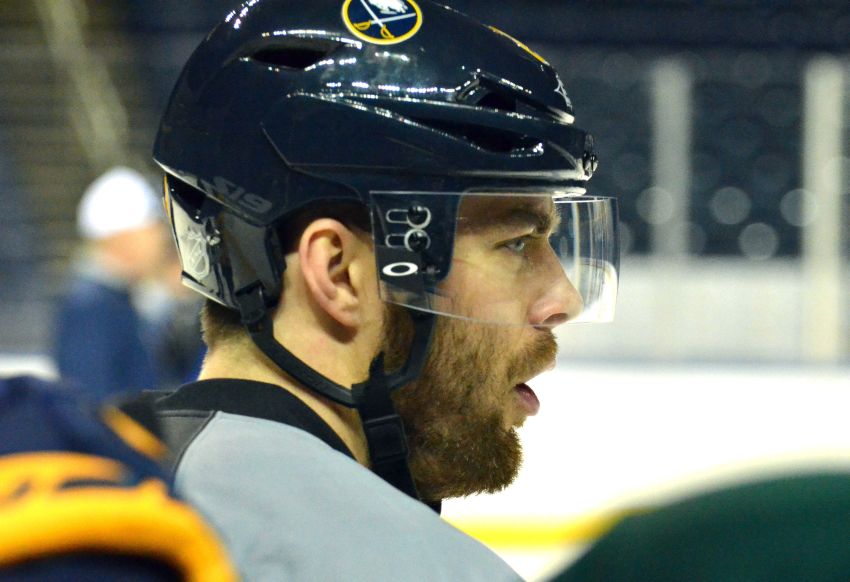 The Sabres initially tried converting Leino into a center again, an experiment that failed miserably. Leino was back on the wing after just a few weeks, generating little as a third- or fourth-liner.

Before the season ended, some observers had already started calling Leino the biggest free agent bust ever.

So much for the Sabres’ belief Leino could grow into a top pivot following a short-but-strong run in Philadelphia.

These days, the likable Leino’s close to returning from a hip injury that has sidelined him the first 26 games this season. The 29-year-old will be a game-time decision for tonight’s tilt against the New York Rangers inside the First Niagara Center, interim Sabres coach Ron Rolston said Monday.

Some of the same fans who wanted to run Leino out of town are intrigued by Leino’s possible return, hoping he can recapture his old form and help jumpstart the 14th-place Sabres, losers of four straight (0-2-2).

“It’s not like one man is going to change everything,” Leino said after practicing Monday. “We all know that.”

But he could certainly help. Leino still has a strong NHL track record, having scored 21 points during a sizzling 19-game playoff run in 2010 and 18 goals and 51 points two years ago.

So what happened last season?

“Well, I wasn’t really having the chance that I wanted to,” Leino said. “I come here with a big deal, and I don’t have a chance to show it. I played a lot of third-line and even fourth-line minutes, no power play. I mean, that takes a lot away from my game.

“I’m always used to be playing (the) power play and big minutes. Obviously, there’s a lot less opportunity and good feeling and a chance to score. You’re not able to do that and get those chances.”

Clearly, Leino didn’t mesh well under former coach Lindy Ruff. Like most coaches, Ruff wanted players to get to the net and shoot. Leino, a superb puck carrier, did little of either.

An east-west player got stuck in a north-south game.

But having Rolston in charge now doesn’t mean things will automatically change.

“Everything has to be earned,” Leino said.

There’s a theory Leino didn’t quite fit on the ice or off it last season. The Finn arrived from a looser (and more successful) dressing room in Philadelphia, and when the Sabres began having some success last year, he said he found them “way too serious” during their struggles.

On Feb. 23, three days after Ruff was fired, Leino said the Sabres had to “have higher demands, higher priorities in the games,” adding, “It’s not always a happy family. You got to have some controversy, some guys pushing each other. It’s not all smiles and happy and be nice.”

Leino hasn’t even played a game since April 7.

“I don’t know if it’s … fitting, whatever it is,” Leino said. “I’m not sure. I don’t think that way. Sometimes I might speak my mind too much. I think it should be what you show on the ice, how you work with the team on the ice. That’s how you show. That’s (how) they see you compete.”

Leino, who went down suddenly Jan. 18, two days before the season opener, sounds hopeful last season will become an anomaly.

Playing center, even for a fraction of the campaign, was different and difficult.

“I wasn’t in my comfort zone as much, or a zone where I feel good, where I play the best, you know?” said Leino, who played center early in his European career and wanted to try it again. “I think that was the issues, too.”

By the end of 2011-12, Leino found some chemistry and comfort on the left beside Derek Roy and Jason Pominville.

“I didn’t have too many points, but we had a lot of chances,” Leino said. “We played good every game. The team was really enthused.”

Rolston could put Grigorenko and Leino together again. The coach wants to surround Grigorenko with veterans.

Following seven straight appearances, Grigorenko was scratched for the fifth time this season in Sunday’s 3-2 loss in Philadelphia.

“The three games before (Sunday) we really saw some growth in his game,” Rolston said. “The Devils game (Thursday) we would’ve liked him to be better than he was, and he took a step back for us.”