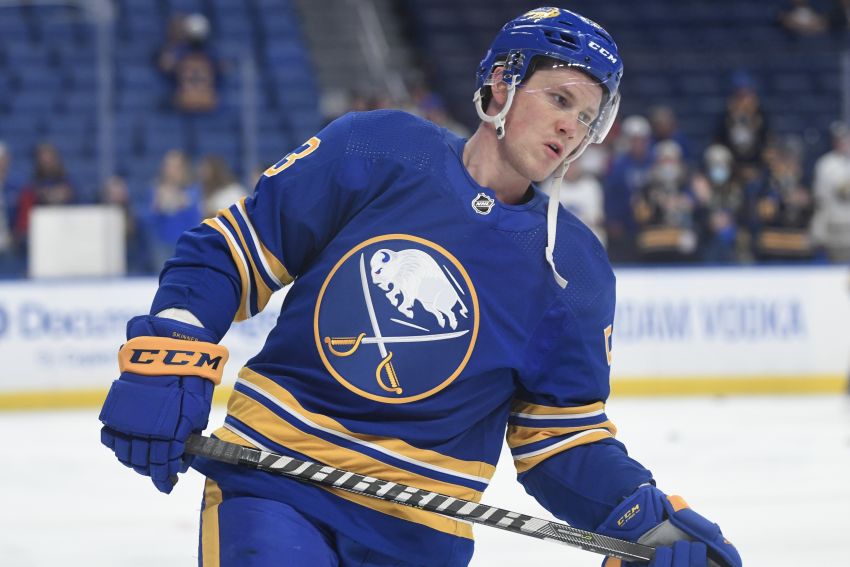 After having three games postponed and one player enter the NHL’s COVID-19 protocol, the Sabres wanted to practice one final time before beginning a four-day break.

“Really get the guys going before we lead into the break,” Sabres general manager Kevyn Adams said on a Zoom call Tuesday.

Adams said doctors approved the plan. If the Sabres didn’t have any additional positive cases, they would skate Tuesday morning at LECOM Harborcenter.

So the Sabres canceled practice and will be off until 2 p.m. Sunday, when the NHL’s COVID/Christmas pause, which goes into effect today, ends.

“Once we had the two more positives today, it didn’t seem like the right thing,” Adams said of practicing. “We wanted to be smart and safe and do everything we can to protect our players and staff.”

Adams, whose entire team is vaccinated, said Girgensons is symptomatic, while Hinostroza and Skinner are asymptomatic. Naturally, Adams is concerned the number of cases could balloon. Last season, the Sabres had as many as nine players in protocol.

“We’ve been dealing with this for quite a long time,” Adams said. “The whole world has. That’s just the reality of the situation. But as an organization, we are following the rules. There’s the testing that is going on. So you are constantly on top of these things. The medical professionals are the ones who are making the decisions.

“But, of course, you do have concern. You have concerns about the guys and the staff. We are hoping that if there are positives, they are asymptomatic, and you feel OK, and you test out. But that’s not always the case.”

When the Sabres reconvene Sunday, they will have been off the ice six days. They canceled their morning skate prior to Monday’s scheduled home game against the Columbus Blue Jackets before it was postponed.

The Sabres, who haven’t played since Friday’s 3-2 overtime loss to the Pittsburgh Penguins, are scheduled to host the New York Islanders next Monday.

But right now, COVID is throttling the NHL, with more than 100 players in protocol. Does Adams think the pause could be extended?

“I haven’t heard anything like that,” he said. “I do believe that really the doctors are working really hard at this to analyze the data, make decisions that are right for the safety and the health of everyone involved. What I have learned is you adjust with what you have to adjust to, and you focus on what you can control. For us, those type of decisions aren’t in our control.”

Meanwhile, Adams said the Sabres’ AHL affiliate, the Rochester Americans, on Tuesday had one player test positive for COVID-19. Tonight’s home game against the Wilkes-Barre/Scranton Penguins has been postponed.

“They had been testing pretty regularly over the past couple weeks,” Adams said of the Amerks. “They unfortunately had a flu bug going through the team that they were dealing with. So, yeah, you worry about that across the board.”