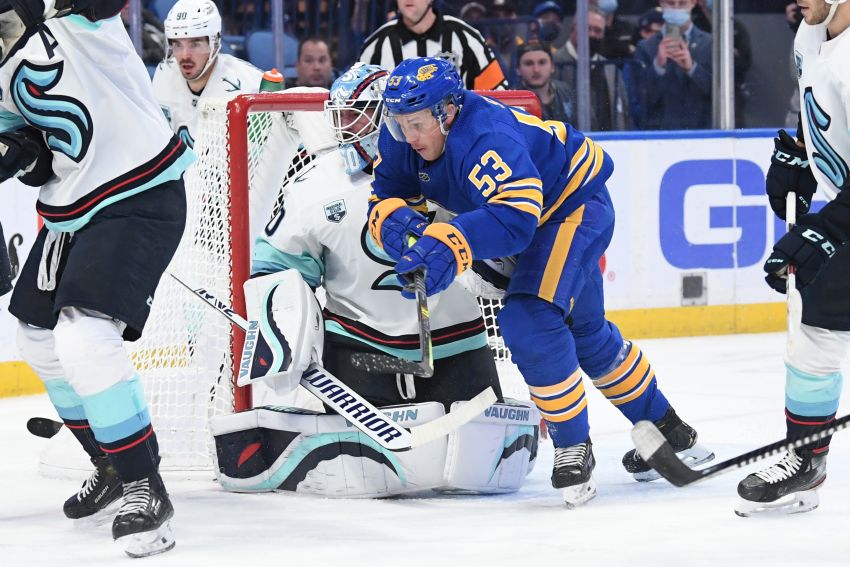 BUFFALO – With the Sabres enjoying a first-period power play Monday, center Tage Thompson dug the puck out from the wall and fed defenseman Rasmus Dahlin at the left point.

During a power play earlier in the period, Dahlin fell down behind his own net, helping Carson Soucy score the first short-handed goal in the Seattle Kraken’s 22-game history.

Well, Dahlin did not seeing Brandon Tanev zooming toward him and tried to backhand the puck back to Thompson. Tanev got a stick on Dahlin’s pass, grabbed the puck and roared down the ice.

Even with Dahlin hectoring him, Tanev beat Sabres goalie Dustin Tokarski to make it 2-0.

Incredibly, by the 14:40 mark of Monday’s 7-4 loss, the Sabres let the Kraken score two short-handed goals.

The poor defense was a harbinger for the night. While the Sabres got back in the game after falling behind 3-0 early, they consistently hung Tokarski out to dry.

“There were some good things in the game, but we didn’t have a sense of urgency at the start with respect to details,” Granato said on a Zoom call. “That was obvious. We allowed too much, too easy and then fought obviously the rest of the way as a result. …

“If you want to sum it up, we didn’t have enough urgency, enough attention to details and the details of our game early on weren’t there.”

This is the fifth time in seven games the Sabres have allowed at least five goals, a stunning number that has resulted in six losses, including five in regulation.

On Monday before a season-high crowd of 10,004 fans inside KeyBank Center, the Sabres trailed 3-0 before the first period ended.

“You start the game that way and it sets the tone – unfortunately, not a good tone – and then you’re trying to catch up,” Granato said.

Still, despite the porous defense, Granato like some of what he saw Monday. Winger Jeff Skinner scored twice, giving him eight goals in 22 games, one more than he had in 53 outings last year. Rookie Brett Murray, 23, scored his first NHL goal in his sixth career game.

“The Cozens line and Thompson’s line, a lot more good than bad out of them,” Granato said. “And the other two lines were challenged and we were challenged defensively. A couple guys on the back end who absolutely did not look like themselves.”

Skinner, who has been playing beside Thompson and Victor Olofsson, has started looking like the slick presence who scored a career-high 40 goals in 2018-19.

“As a line we’re playing pretty well,” Skinner said. “Tage made some pretty good plays down the middle, got a good forecheck there. … Part of my job is to generate offense and to capitalize on opportunities and I’m going to try and keep doing that.”

Meanwhile, Murray, whose family traveled to watch him in the NHL for the first time, scored the Sabres’ first goal 1:53 into the second period.

“It was a pretty special feeling,” said Murray, who has been playing with Cozens and Kyle Okposo. “It’s something that you’ve worked your whole life for. For it to finally happen is amazing. Even more amazing that I was able to have my entire family in the stands there. It makes it even more special.”

Murray, who has been recalled three times this season, seems be a better player each time he arrives in Buffalo.

“It’s just learning, learning every day,” said Murray, who also recorded an assist Monday. “I’m on a line with Kyle Okposo and Dylan Cozens. Okposo’s someone I’ve looked up to for a long time. He’s been around the game, he’s been real good at it. So just to be able to pick his brain every single time I come off the ice.”

The Sabres made one lineup change Monday, inserting defenseman Will Butcher for Jacob Bryson, who has been dealing “something nagging,” Granato said.

“(I) didn’t want to put him in a spot where it could make it worse,” Granato said. “I do expect him ready for Thursday (against the Florida Panthers).”

Cozens scored the Sabres’ other goal.

2 thoughts on “Sabres fall behind early, lose to Kraken; Jeff Skinner looking like old self”