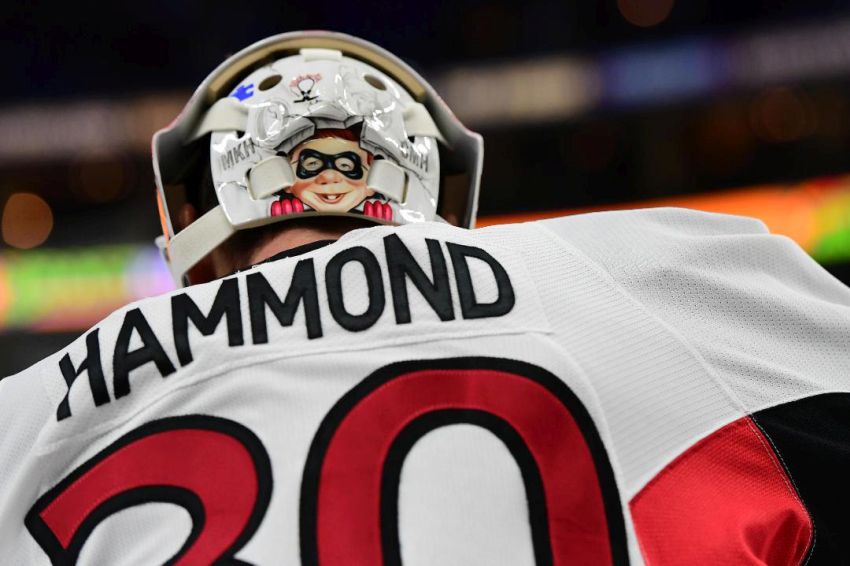 Andrew Hammond has earned the nickname “The Hamburglar.” ©2019, Hickling Images

Even as an undrafted rookie in 2013-14, Hammond earned 35 minutes of big league action. In 2017-18, a tough campaign in which he bounced around and started just one regular-season contest, he won a playoff game for the Colorado Avalanche.

But last year, the affable Hammond, 31, spent the entire season with the Iowa Wild, Minnesota’s AHL affiliate in Des Moines.

The season, however, turned out to be special for Hammond, who signed a one-year, $700,000 contract with the Sabres shortly after free agency opened Monday.

“This past season in a lot of ways got me back to really enjoying hockey again and having fun,” Hammond told the Times Herald by phone Tuesday. “Even with it not being at the NHL level, I think that was important for me.”

In 2017-18, Hammond expected the Ottawa Senators would trade him early in the season, so his wife, Marlee, and son, Cal, stayed home in Ohio. Even after they dealt him to Colorado that November, he mostly lived alone in a hotel.

So last season, Hammond, who battled injuries for years, enjoyed his family and his health.

The Bowling Green product played 33 regular-season games, then another 11 in the postseason.

“The biggest thing I take away from the past season is just how much I do love the game,” said Hammond, who has played 56 NHL games. “It was great to get back to playing regularly.”

That regular action caught the eye of the Sabres, who want Hammond to be their third goalie.

So he could be the Rochester Americans’ starter next season. Or perhaps he will share the net with top netminding prospect Ukko-Pekka Luukkonen, a Finn labeled as Buffalo’s goalie of the future.

“If that’s what ends up happening,” Hammond said of possibly playing with Luukkonen, “then obviously it’ll kind of feel funny in some ways that it seems like the same thing again.”

But given how much Carter Hutton and Linus Ullmark struggled last winter, Hammond could certainly earn some NHL duty.

“I’m going to earn whatever I get, so if I’m playing really well and they see value in that, then who knows where I end up playing?” he said.

Hammond, of course, is best known for his scintillating two-month stretch of goaltending late in 2014-15.

After Ottawa’s Robin Lehner suffered a concussion that February, Hammond, who had barely half a game of NHL experience at that point, suddenly morphed into the league’s best goalie.

The legend of “The Hamburglar,” a nickname he received in college, was born.

One of the most memorable scenes from the Senators’ run was Curtis Lazar, a center the Sabres also signed Monday, eating a hamburger a fan had thrown on the ice.

“We weren’t taking ourselves very seriously,” Hammond said. “I mean, we were playing a little bit with, I guess, house money to an extent, because no one was expecting us to do much.

“I thought we thrived on it, took advantage of the situation and just had fun with it.

But he has struggled to recapture the magic of his rookie campaign. Injuries and tough luck have stymied him.

He posted decent numbers in 24 games in 2015-16. But he has only made seven regular-season NHL appearances over the past three years.

Looking back, Hammond said he regrets trying to play through some injuries.

“In hindsight, it would’ve been best for me to make sure I got healthy,” he said. “But sometimes the competitiveness of being an athlete gets in the way of you realizing what would probably be the smartest thing.”

He added: “It was a combination of a lot of things that seemed to go against me. You know what? Those things happen. I think in a lot of ways it taught me a lot.”