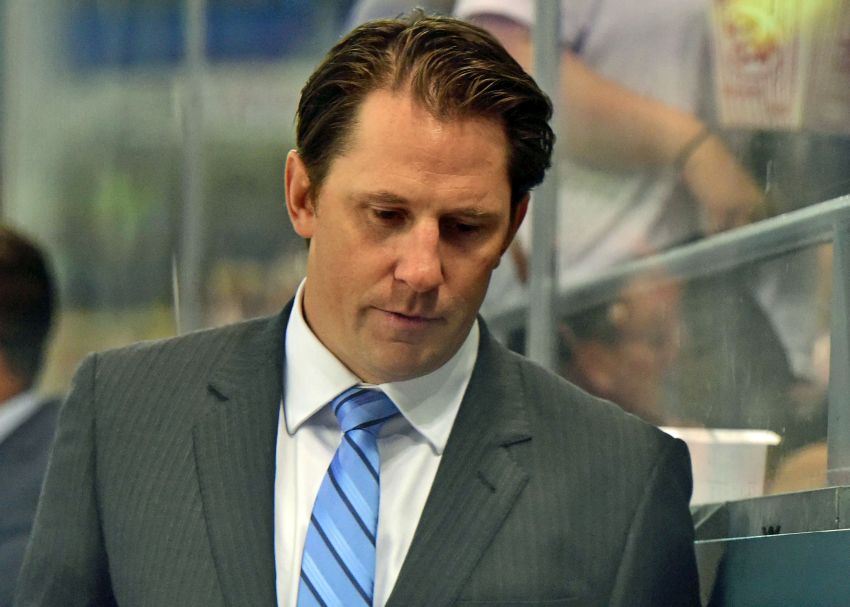 In between gigs a few years ago, before McKee, 38, quickly ascended up the junior coaching ladder, the popular former Buffalo Sabres defenseman often eschewed the mundane words and pictures many ex-athletes tweet and utilized Twitter to showcase his lively personality.

It was all, of course, harmless fun for McKee, who on May 12 was named coach of the Kitchener Rangers. Still, tweets like the ones that poked fun at diminutive winger Nathan Gerbe’s size, for example, and the, uh, unique jack-o-lantern photo McKee sent Hall of Famer Brett Hull have been deleted from @JayMcKee74, an account with more than 33,000 followers.

“I use Twitter as a bit of a conduit to apply a sense of humor to make people laugh in their daily lives,” McKee said last week. “Obviously … when you get a position like the one I’m in now or even as an associate (coach), some things through social media have to get cleaned up a bit and tapered off.

“But I don’t see why people can’t be respected people that work hard and still carry a sense of humor. I think that’s an important trait to have in life.”

A lot of traits, including a down-to-earth, fun-loving personality that helps him connect with youngsters, allowed McKee take over his own bench after only two seasons as an Ontario Hockey League assistant, the second of which he spent as the Rangers’ associate coach following a season with the Erie Otters.

When coach Mike Van Ryn suddenly left the Rangers to spend more time with his family, the team promoted McKee, who said he shared similar philosophies with Van Ryn.

“There’s no question that I’m ready for the position, but I feel fortunate it’s come so quick,” said McKee, who went 94-31-21 as an OHL assistant.

It came very quickly. Barely two years ago, McKee was coaching and occasionally playing for the Dundas Real McCoys, a AAA Senior team in Ontario he led to a national championship.

He started coaching in 2010-11 as a volunteer at Niagara University before a one-year stint in 2011-12 as an assistant under Ron Rolston with the Rochester Americans, the Sabres’ AHL affiliate.

McKee, the 14th overall pick by the Sabres in 1995, could have pursued several new paths in hockey after his 802-game NHL career ended in 2010. Since his opinion is respected, he might have made a good scout or management member. He’s also well-spoken and thoughtful enough to be a broadcaster.

He said he chose coaching because he likes “to be around the dressing room.”

“I think my personality kind of helps connect to the players,” McKee said. “That’s something I really believe in, a player-coach connection where they trust you, they feel like you have love for them, you can win together. That’s one of my strengths, is having a real good connection to the players.

“I like being on the ice, teaching, developing, coming up with new, innovative systems. I just think that’s kind of more my mold.”

That was probably hammered home to McKee during his final NHL season with the Pittsburgh Penguins under current Sabres coach Dan Bylsma, a “hybrid”-type coach.

As McKee began slowing down and sensed the end was approaching, he started paying closer attention to how his coaches “held themselves around the room and how they carried themselves” and the staff’s daily activities.

“Dan’s a guy I highly respected when I played for him,” he said. “I think a lot of just his mannerisms and the kind of person he is, I reflect a lot of that.”

“I think Lindy and I had a lot of similarities as assistant coaches,” he said. “I was told he was kind of (a) players’ coach – real fun, liked to joke around, had a great sense of humor. (That’s) something I think I brought to the table as an associate coach.

“So one of the talks I’ll have with him is making that transition and how much things have to change going from an assistant or an associate to a head coach. … I have a high level of respect for what he’s done and accomplished at the NHL level.”