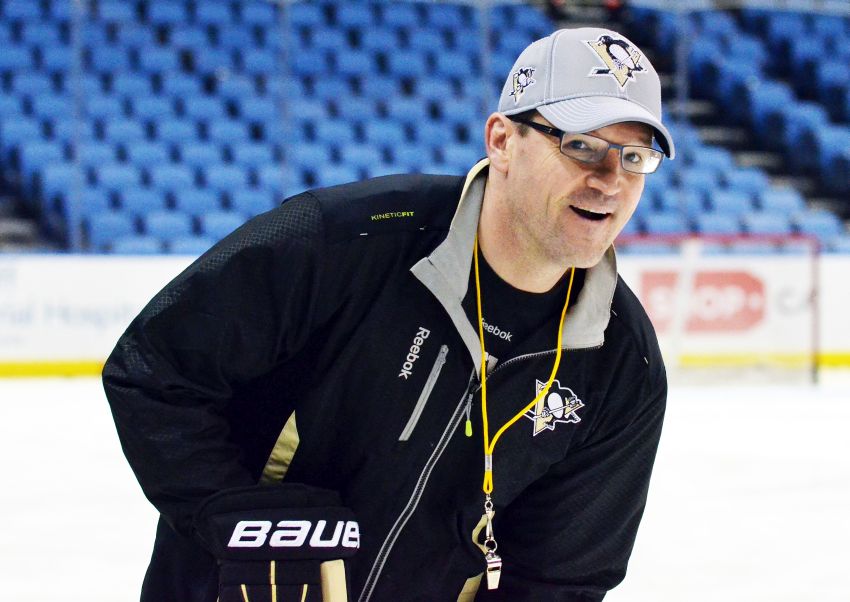 One day in 2009-10, Dan Bylsma, then in his first full season as the Pittsburgh Penguins’ coach, had an odd request for Jay McKee, one of the NHL’s top shot blockers for years.

“He actually asked me not to block as many shots,” McKee, a popular former Buffalo Sabres defenseman, said by phone Tuesday.

One of McKee’s recent blocks had deflected into the net, so Bylsma, who will reportedly interview with the Sabres this week, told the gritty veteran to get out of the way and concentrate on taking the body in front.

“I was honest with him,” McKee said, “I said, ‘Dan, like, this is my style. I’ve played this way a long time. It’s like asking a passer to stop passing and start shooting. It’s going to take me an adjustment if you want to stop getting in shot lanes.’”

The next game, McKee’s natural instincts took over, so he tried blocking a shot. Bylsma called the 14-year veteran into the office the next day.

“He asked me, ‘Are you coachable or no?’” said McKee, who told Bylsma he needed a week or two to adjust.

McKee spent years playing against the 44-year-old Bylsma, who also broke into the NHL in 1995-96 and retired in 2004. Still, McKee knew little about him when he began his final campaign.

He found Bylsma blunt, approachable – “You felt like you could go to him,” he said – and a “real good teacher.” Bylsma treated the Penguins’ fourth-liners the same way as his superstars.

“He taught the systems well, he changed it up quite a bit,” McKee said. “He really involved the players a lot in a lot of meetings. It wasn’t like it was his way or the highway; he was real good with communicating with players, getting their input, having a good vibe on the pulse of the team. He found ways, whether it was video, certain things during practice.”

For McKee, who was in his final NHL season, going to the rink every day was fun.

“Some coaches, you feel like it’s work,” he said. “You go to the rink and you’re bogged down with all kinds of video, all this information. I just thought his preparation for each game was exceptional toward the players. I thought he was a good person.”

But McKee “wouldn’t … define him as a players’ coach.”

“He was a guy you could talk to,” he said, “if that’s what you want to categorize as a players’ coach. … He was … just blunt, like, ‘This is the game plan that’s going to give you the best chance to win.’ … We’d come in after the first period, if guys weren’t playing the system, he wasn’t going to walk around screaming and yelling.”

McKee, now an assistant coach with the junior Erie Otters, believes Bylsma would be a “good fit” for the rebuilding Sabres, who fired Ted Nolan on April 12 and lost out on the Mike Babcock sweepstakes last week.

“I think because with the young players that are growing and developing, you need good structure, you need good teaching,” McKee said. “You need a guy players feel like they can speak to, and I feel he’s that kind of guy. There’s a lot of attention to detail. There’s a lot of changing things up mid-game. It’s not just one system all game long. He’ll change things on the go. … I think he would be a good fit right now for what this team is in.”

Bylsma, a 2009 Stanley Cup winner, sat out this season after getting fired last year. He recently served as an assistant for Team USA at the world championship, coaching Jack Eichel, the 18-year-old mega-prospect the Sabres plan to draft second overall next month.

The American could be the Sabres’ leading candidate. No teams have asked the Senators’ permission to interview Luke Richardson, according to the Ottawa Sun. Richardson, AHL Binghamton’s coach, has strong ties to Sabres general manager Tim Murray and is believed to be a candidate.