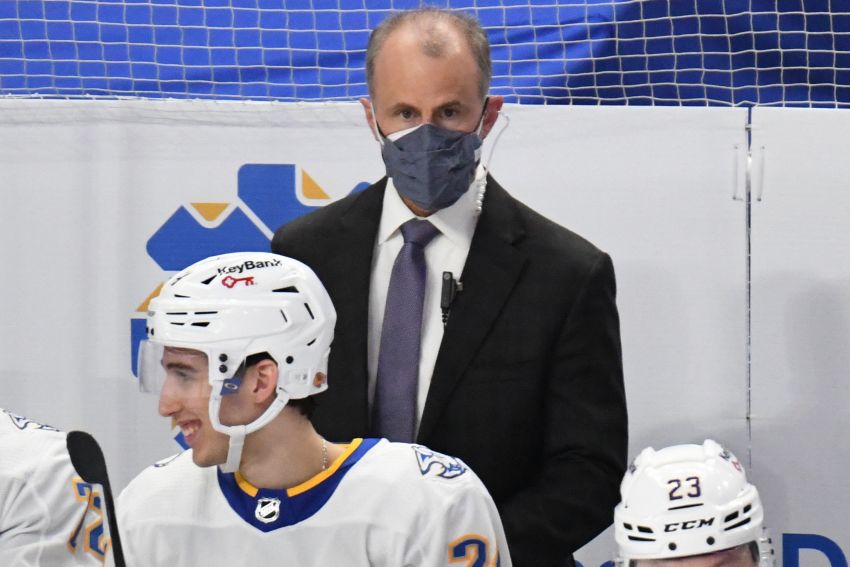 When the Buffalo Sabres named Don Granato their interim coach, he was expected to simply be a fill-in. After their disastrous season ended, general manager Kevyn Adams could start searching for Ralph Krueger’s permanent replacement.

But a funny thing happened. Granato, who was named the 20th head coach in franchise history Tuesday, quickly emerged as the Sabres’ best long-term option.

After losing their first six games under Granato, 53, the Sabres looked like a radically different team, showcasing a tighter, more aggressive and exciting brand of hockey.

The same hapless team that endured an embarrassing 18-game winless skid finished the tumultuous 2020-21 season on a 9-11-2 run, beating every East Division heavyweight down the stretch.

Young players thrust into significant roles because of injuries and trades seized their opportunities.

While Adams interviewed other candidates, it was believed Granato, who signed a three-year contract, according to reports, would eventually be named coach.

Granato, an assistant coach under Krueger before replacing him March 17, will address the media on a Zoom call Thursday. He’s the Sabres’ seventh coach since 2013, a stunning number that illustrates their futility.

Of course, Granato, who has been a head coach in junior, the ECHL and AHL, has his work cut out for him. The Sabres just finished dead last for the fourth time in seven years. The NHL’s laughingstock has missed the playoffs an NHL record-tying 10 straight seasons.

The Sabres are beginning a critical offseason that might reshape them for the next decade.

Disgruntled captain Jack Eichel, the face of the franchise and the Sabres’ most dynamic player, could be traded in the coming weeks. Eichel, 24, was non-committal about his future during his end-of-season media availability last month, saying there was a disconnect between himself and the team over the season-ending neck injury he suffered March 7.

Eichel wants to undergo a surgery that has never been performed on an NHL player. The Sabres, meanwhile, have told the ultra-talented center to go through a conservative rehab.

Also, center Sam Reinhart, 25, and defenseman Rasmus Ristolainen, 26 – two veterans who have endured nothing but losing in Buffalo – have said they don’t want to experience another rebuild.

If the Sabres deal two or three of their best players, they would certainly be starting over again. They also own the first overall pick at the July 23 NHL Draft.

Whatever happens, the Sabres likely won’t be championship contenders in the near future. They went 15-34-7 in 2020-21, mustering only 37 points. The teams competing for the Stanley Cup right now – the Montreal Canadiens and Tampa Bay Lightning – will be back with the Sabres in the Atlantic Division next season following the one-year realignment for COVID-19.

But given how quickly the affable Granato transformed the Sabres, especially some of their young talent, it’s not crazy to think they can showcase more growth next season.

Clearly, Granato’s varied experience helped him seize his first opportunity to run an NHL bench. He has developed a unique perspective into the modern hockey player and the way the game is played, having also coached in junior, college and the AHL in the 10 years before he joined the Sabres.

Granato connected with many of his players, getting them to quickly buy in.

“A lot of guys, including myself, owe Donnie quite a bit,” Mittelstadt said May 8 following the Sabres’ season finale. “He challenged me when he took over and pushed me to become a better player. I think it’s that simple. …

“I owe Donnie a huge thank you.”

Granato paid plenty of dues to earn Buffalo’s job, starting his coaching career in 1993-94 with United States Hockey League’s Wisconsin Capitals, a junior team. He was just three years removed from winning a national championship as a forward with Wisconsin.

But Granato moved up the ladder quickly, winning the USHL championship with the Green Bay Gamblers in 1995-96 and the ECHL title with the Peoria Rivermen in 1999-00.

Granato, whose sister, Cammi, is a Hockey Hall of Famer, earned AHL coach of the year honors in 2000-01 following his promotion to the Worcester IceCats. He battled Hodgkin’s Lymphoma in 2005 and took a leave of absence from the IceCats. Still, he parlayed his time in Worcester into his first NHL gig as an assistant with the St. Louis Blues.

Granato has been coach or an NHL scout – he worked for the Toronto Maple Leafs and Vancouver Canucks – every season for the last 27 years.

He left Vancouver in 2011 to take a job with the United States National Team Development Program, where he coached a teenage Eichel and Thompson. He departed the USNTDP to join his brother, Tony, as an associate coach at Wisconsin.

He also spent two years as an assistant with the Chicago Blackhawks, his hometown team, before Krueger hired him.

Granato took a leave of absence from the Sabres for the first six weeks of the 2019-20 season after being hospitalized with severe pneumonia.