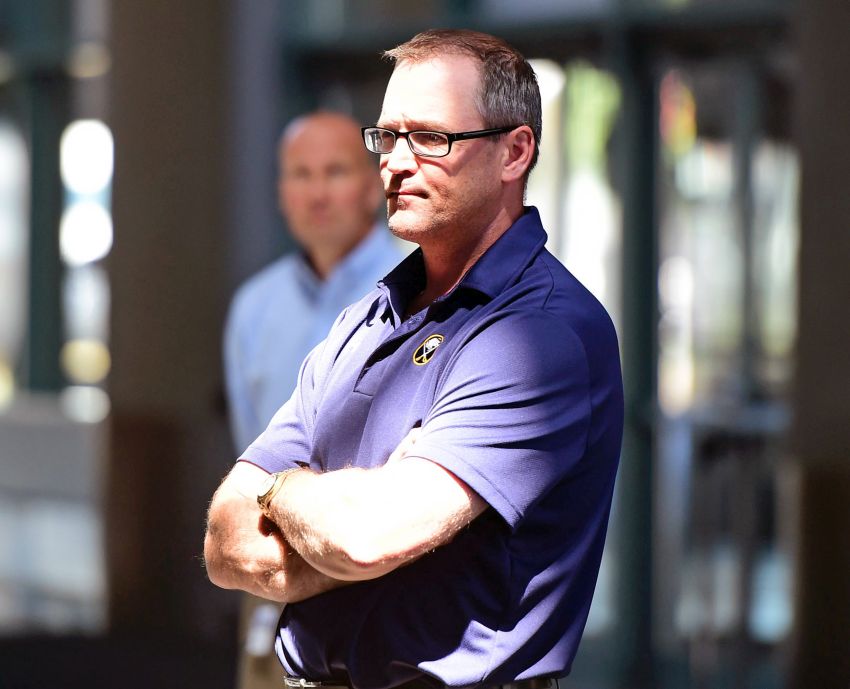 Dan Bylmsa could have an ultimatum next season. ©2017, Dan Hickling, Olean Times Herald

Still, they never thought they would rank among the NHL’s bottom-feeders again.

Instead of building off their 27-point improvement in 2015-16, they imploded down the stretch this season, finishing last in the Atlantic Division and missing the playoffs – their big goal – by a whopping 17 points.

The optimism the Sabres carried into the summer a year ago has vanished, the victim of a disappointing year in which they finished with three fewer points and arguably regressed.

How did the Sabres feel Monday as they packed up after another lost season?

The Sabres gathered Monday for their end-of-season meetings inside KeyBank Center knowing the group that convenes in September could look much different.

One position, however, will likely stay the same. Bylsma, it appears, will remain coach.

Bylsma, who has a five-year contract, said he has spoken to Sabres general manager Tim Murray.

Bylsma, who may have a playoff ultimatum next season, is going forward with plenty of problems.

The defense needs to be overhauled. While the Sabres had the No. 1 power play, they struggled to score at even strength, ranking second-last in goals. They need more forward depth.

Beyond personnel, the Sabres, as defenseman Josh Gorges said, “got a lot of growing up to do.” The team’s professionalism factored heavily in their dreadful season.

Gorges said players must “look in the mirror” and ask, “Were we prepared enough, did we actually care enough to do the things that we need to do to take the next step?”

“The answer is no, we didn’t because we’re not there,” he said. “Like I said from the start of the year, I believed that this team was a playoff-competitive team. … We’ve shown that, we played with the top teams in the league. …

“But we need to know how to do that consistently, and that’s going to come from how we prepare for practice, how we come to the rink mentally for meetings and video and everything.”

Sabres captain Brian Gionta added: “I hope we figure out how to bring a more consistent effort with preparing ourselves better, day in, day out, coming with a better insight of what it takes to win nightly in this league.”

On Monday, Gionta and others shouldered blame – “It’s the players on the ice,” he said – for the 33-37-12 season. So did Bylsma, whose goal has been “developing a winning culture and a winning team.”

So far, he has failed to accomplish that.

“We’re in that process right now, but it’s one I have to be judged on,” Bylsma said. “We fell short of where I think we thought we could be, hope we could be, and I take full responsibility for that.”

Clearly, both sides must evolve. It’s no secret some of the team’s top forwards felt restricted by Bylsma’s conservative system and want him to change it.

“We can’t expect to continue to do the same things and do it the same way and have a better result,” Bylsma said. “That change … comes with some uncomfortable times and some unhappy people at different times.

“But that’s something that we’re going to keep pushing on and pushing for our team, because we have to know that we have to change if we’re going to develop the team that we can be, which we think is a winning team.”

But was there a disconnect somewhere during the season? Did the players understand their expectations on the ice?

“We have conversations with the players about the system throughout the time,” Bylsma said. “We believe we’re on the same page and have a good understanding of that system and how we play. I feel like there’s not a disconnect. They’re a part of the conversation and a part of how we play. That’s something we all have ownership in.”

Gorges added: “I don’t think it’s anything with the coaches, with our systems. It gets laid out for us.”

Kane, whose 28 goals led the Sabres, wants them to be a “fast, skilled team” with “a little bit more of an F-you attitude.”