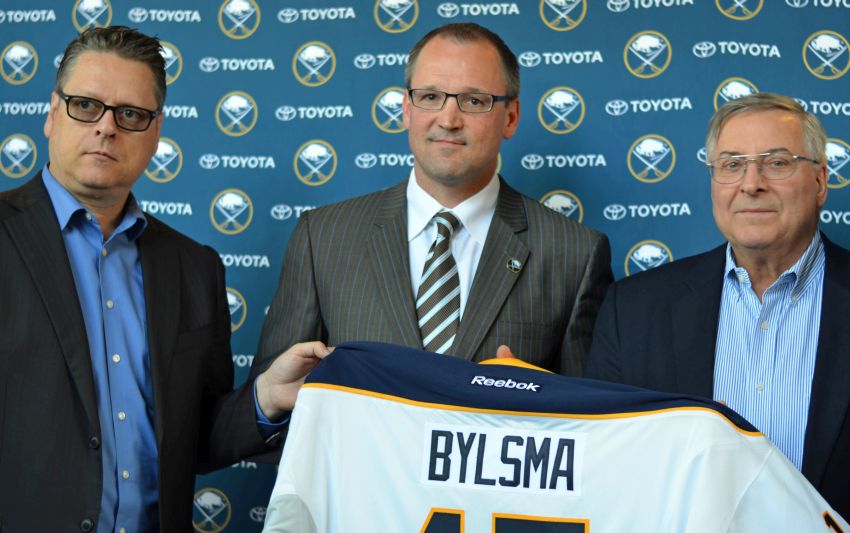 BUFFALO – There was a time before the Sabres hired Dan Bylsma on Thursday that the coach and general manager Tim Murray both represented the Anaheim Mighty Ducks.

Back in the early 2000s, as Bylsma finished up his journeyman playing career, Murray was the team’s director of player personnel.

“I complained about him a lot,” Murray cracked Thursday during a news conference to introduce Bylsma as the Sabres’ 17th coach in franchise history. “That’s about all I remember.”

Given their different roles, the two really didn’t have a relationship. But Murray understood then that Bylsma, who eked out nine years as an NHL role player, possessed the qualities that could someday make him an excellent coach.

“He was somewhat of a coach as he was playing,” Murray said inside the First Niagara Center.

Murray was right about Bylsma. After retiring, he quickly moved up the coaching ladder, leading the Pittsburgh Penguins to the Stanley Cup just months after taking over in 2009.

Still, Bylsma faced an uphill challenge. Despite a wealth of talent, the Penguins underachieved in the postseason in the following years, so he was fired a year ago.

The 44-year-old spent this season on the sidelines, watching “more hockey games than I really wanted to,” growing as a coach and examining the game differently, he said. Earlier this spring, he called Murray about the Sabres’ vacancy. The Sabres’ load of young talent intrigued him. So did the passion he had seen from owner Terry Pegula.

“I looked at the players coming into this organization and what they can be down the road,” Bylsma said.

Bylsma and Murray agreed to talk when Bylsma returned from the world championship.

Murray, meanwhile, was conducting his first search as a GM. He recently said he was open to any kind of coach. But subconsciously, he admitted Thursday, he was going after experience. The four candidates he spoke to were veterans, he said.

“I look at it as where we are now that I really want to get somebody who had some cachet, who I felt was a good coach but had success team-wise and individually,” Murray said.

When the Sabres lost out on Mike Babcock last week, Murray zeroed in on Bylsma, who was given a five-year deal on Thursday. The Sabres sent the Penguins the 2016 third-round pick they received from the New York Islanders in March as compensation.

“Obviously, we’re going to be a young team,” Murray said. “We need somebody who knows how to teach, knows how to communicate. It’s not just telling somebody what to do; it’s why you have to do that. There aren’t a lot of coaches who can do that. I think Dan is one that can.”

Their relationship, of course, will be vital to the Sabres’ success. Murray never meshed with former coach Ted Nolan before firing him April 12.

“We have to make sure we work together,” Murray said about Bylsma. “That’s the plan. … I plan on talking to him every day. I plan on if a team calls me and I think it’s a serious discussion on a player, I plan on bringing that to his attention. I plan on asking his opinion. We’re not always going to agree.”

Those disagreements will be healthy, Murray said.

“You keep trying to get better,” he said. “That’s the relationship I want.”

Bylsma’s beginning a drastically different gig than the one he inherited six years ago. The rebuilding Sabres are coming off two straight 30th-place finishes. The playoffs might not be realistic next season.

“I don’t think there’s a timeframe that we’re going to put certain aspects of success of where this team’s going to be,” Bylsma said.

Bylsma had plenty of regular-season success in Pittsburgh. His .668 points percentage – 252-117-32 – is No. 1 among coaches with at least three seasons of experience. He was let go after a 51-win season.

Coaches like that rarely get fired. But Bylsma said he’s not coaching to prove anything.

“That is no way or shape the reason why I coached or want to coach or have any interest in coaching the Buffalo Sabres,” he said. “I look at the opportunity to come to an organization, develop with this team, develop into a winning culture on a winning team. I’m not coaching to prove anything to anybody else.”

Murray has the opposite belief.

“(Bylsma) comes back in now to come back to prove to the hockey world and the rest of the coaches that he has it,” he said.

Bylsma should have one big asset next season, center Jack Eichel, the mega-prospect the Sabres plan to draft second overall next month. He recently saw the 18-year-old phenom up close as an assistant coach for Team USA at the world championship.

“You have a chance to see a guy who’s going to be an elite, elite player,” Bylsma said. “He’s got outstanding skill, and you see him play against a lot of NHL players. He matched up against Evgeni Malkin when we played Russia, he’s playing against Tomas Plekanec when we play against the Czechs, in the bronze medal game he’s playing against NHL players. And he stacked right up there with his skill and his size and his ability to play the game.”

– Murray said Bylsma will have “final say for most part” on hiring assistant coaches. Bylsma will talk to goalie coach Arturs Irbe, the one holdover from the Nolan era.

– Bylsma’s the first Sabres coach to have earned a Cup ring as a head coach since John Muckler.

– Bylsma on meeting Pegula when he coached the Penguins: “Right away, the want, passion, desire to bring a winning team to Buffalo, this organization, was evident.”

– Bylsma, who coached Malkin and Sidney Crosby in Pittsburgh, on having superstars: “You understand, immediately, the spotlight that is on those types of players, star-quality players. You understand the pressures that they will be going through, the eyes on them from just about everybody. … I probably learned as much from … working with Sidney Crosby, Evgeni, as they did for me.

“I think it’s going to be applicable to the likes of (Sabres prospect) Sam Reinhart, Jack Eichel, who are going to be in different development stages … but are going to be viewed in that same light, that some scope that star players are put into.”