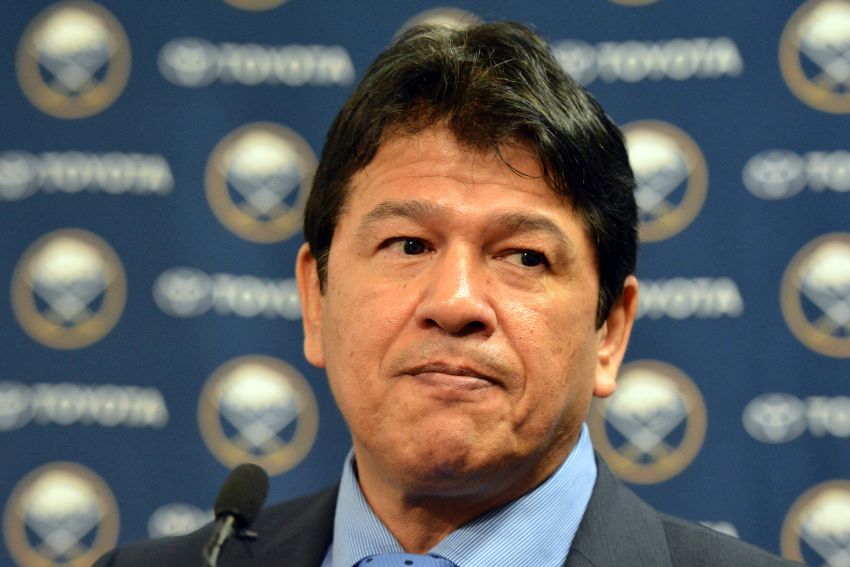 BUFFALO – The odds, of course, were stacked against Ted Nolan succeeding in his second run as Sabres coach, which ended with his firing Sunday night, less than a day after a 30th-place finish.

Perhaps Murray felt obligated to keep the popular coach for a trial or good public relations. Considering the Sabres’ were undertaking a deep rebuild, it was a low-risk move.

By early November, when the Sabres started 2-9-1, it appeared Nolan could be one-and-done.

“I’ve said all along I want to improve this team every day,” Murray said at a hastily called news conference inside the First Niagara Center. “Today, I came to the conclusion a change may help us improve.”

Murray reached that conclusion after six hours of exit interviews with players, who cleaned out their lockers Sunday.

“Every player, to a man, believes that Ted Nolan is a good man, and they were sure to tell me that,” Murray said. “But I went in with an open mind.”

Murray and Nolan never found the right chemistry together.

Murray thanked the 57-year-old Nolan and his staff for working under “less-than-ideal circumstances.”

The Sabres also let go of assistant coaches Bryan Trottier, Tom Coolen and Danny Flynn. For now, goalie coach Arturs Irbe, who has one year left on his contract, is still with the team. Murray might recommend the new coach interview Irbe.

Out of respect for Nolan, Murray wouldn’t comment on his coaching search or put a timetable on it.

“Today’s today,” he said. “A good man loses his job. We’ll look to the future tomorrow.”

The new coach will almost certainly have a better roster than the one Nolan worked with this season. Many observers believe the Sabres’ higher-ups tanked 2014-15 to get the first or second pick in the upcoming draft.

Nolan had some notable veterans. Murray made a slew of acquisitions during the summer, although they often looked past their primes or downright terrible.

“We decided to go with young guys in the rebuild and surround them high-character veterans,” Murray said. “We’ve done that. We still finished in 30th place. There’s been a lot of changes, and that’s on me.”

The Sabres only got hot once, going 10-3 in November and December. A 14-game losing streak soon followed.

By the end, after trades decimated the lineup, Nolan was forced to skate several AHL players.

Murray and Nolan, who coached the Sabres from 1995-97, never found a good place in their relationship. They tried to make it work.

They never had any big arguments or fights, Murray said. There was a lack of communication, but Murray blamed himself as much as Nolan. Murray said he never micromanaged him.

“So there was no incident that caused me to make this decision,” Murray said.

Murray wasn’t sure if Nolan expected to have input on trades, which he didn’t. Nolan might’ve wanted a specific player to be recalled a couple of times, but he never expressed any disappointment.

Nolan’s development of some youngsters, most notably defenseman Rasmus Ristolainen, pleased Murray. Others didn’t make the strides he wanted.