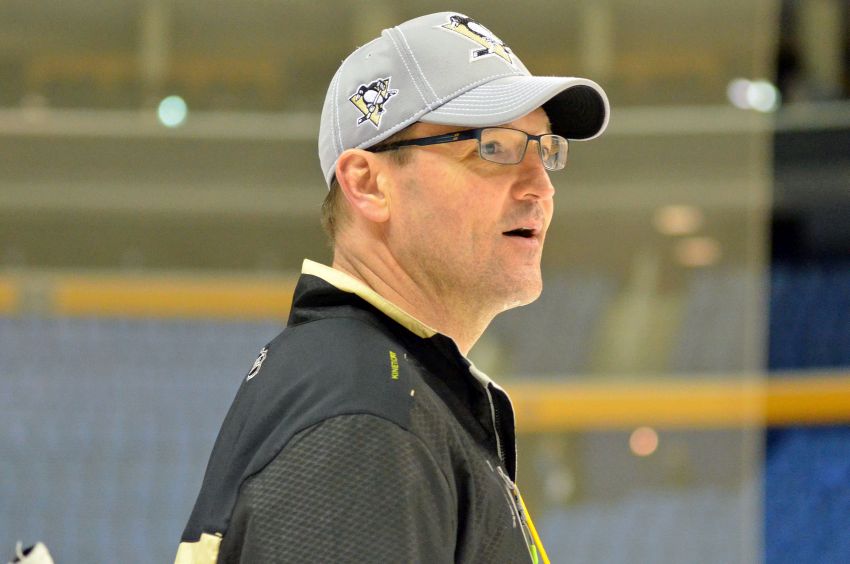 The 44-year-old Bylsma, who spent Wednesday visiting with the Sabres, will be formally introduced at a 4 p.m. news conference at the First Niagara Center.

Update: Bylsma has a five-year contract, according to TSN’s Darren Dreger.

Sabres owners Terry and Kim Pegula went big again, bringing in perhaps the most notable name left on the market. Their hire of Rex Ryan to coach the Buffalo Bills earlier this year has already been a huge hit.

The Sabres targeted Bylsma last week after they lost out on Mike Babcock to the Toronto Maple Leafs, receiving permission from the Pittsburgh Penguins to interview Bylsma, who was fired a year ago after six seasons.

According to TSN and other outlets, the Penguins’ desire to receive compensation – reportedly a third-round pick in 2016 – for Bylsma, who was under contract until 2016, held up the deal today.

Update: The pick is the one the Sabres received from the Islanders in March.

Bylsma won the Cup just months after taking over the Penguins in February 2009. But a string of disappointing playoff finishes – the Penguins only reached the Eastern Conference final again once – cost Bylsma his job. Still, he has a career record of 252-117-32.

The Michigan native sat out this season, although he recently served as an assistant for Team USA at the world championship, coaching Jack Eichel, the mega-prospect the Sabres plan to select second overall next month.

Update: Here are some quotes from this afternoon’s news conference introducing Bylsma.

Bylsma, who reached out to general manager Tim Murray before he went overseas to coach earlier this spring, on the timeframe for winning:

“I don’t think there’s a timeframe that we’re going to put certain aspects of success of where this team’s going to be.”

Bylsma on having something to prove after getting fired:

“That is no way or shape the reason why I coached or want to coach or have any interest in coaching the Buffalo Sabres. I look at the opportunity to come to an organization, develop with this team, develop into a winning culture on a winning team. I’m not coaching to prove anything to anybody else.”

Murray on why Bylsma’s the right man for the job:

“High winning percentage, a lot of wins in a short period of time, great communicator. Obviously, we’re going to be a young team. We need somebody who knows how to teach, knows how to communicate. It’s not just telling somebody what to do; it’s why you have to do that. There aren’t a lot of coaches who can do that. I think Dan is one that can.”

Bylsma, who had Sidney Crosby and Evgeni Malkin in Pittsburgh, on coaching stars:

“You understand, immediately, the spotlight that is on those types of players, star-quality players. You understand the pressures that they will be going through, the eyes on them from just about everybody. … I probably learned as much from … working with Sidney Crosby, Evgeni, as they did for me. I think it’s going to be applicable to the likes of Sam Reinhart, Jack Eichel, who are going to be in different development stages … but are going to be viewed in that same light, that some scope that star players are put into.”

“You have a chance to see a guy who’s going to be an elite, elite player. He’s got outstanding skill, and you see him play against a lot of NHL players. He matched up against Evgeni Malkin when we played Russian, he’s playing against Tomas Plekanec when we play against the Czech, in the bronze medal game he’s playing against NHL players. And he stacked right up there with his skill and his size and his ability to play the game.”

Bylsma on how he spent his year off:

“I’ve watched more hockey games than I really wanted to this season. I’m quite confident my wife thinks I watched too many hockey games this past season. It has afforded me the opportunity to look at the game from a distance, to look at different aspects of the game and question, even grow as a coach.”