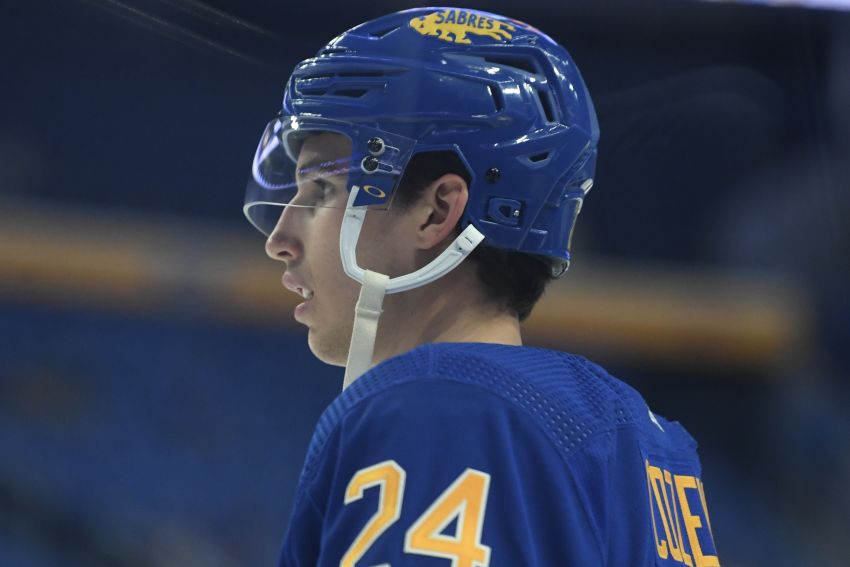 BUFFALO – Earlier this week, Sabres coach Don Granato sat down with Dylan Cozens and watched some video clips. When they finished, he asked the second-year center if he felt ready to shadow Connor McDavid, hockey’s biggest superstar.

“I watched his body language,” Granato said after Cozens starred in Friday’s 3-2 win over the Edmonton Oilers, which ended a five-game winless skid. “If his body language was different, he wouldn’t have got that matchup. I liked what I saw and felt he was ready for the challenge, whichever way it went.”

Cozens responded to the challenge, scoring two goals while and shutting down McDavid’s line with Drake Caggiula and Vinnie Hinostroza, his wingers.

In the first 12 games this season, Cozens, 20, scored just once, his only goal in 32 outings dating back to last year. Then in a span of barely five minutes in the second period, the center scored twice, tying the game before putting the Sabres up for good.

Cozens, 20, scored a nifty goal from the bottom of the right circle at 13:56, bursting past three defenders after Caggiula fed him a pass. Then Cozens tallied again at 19:10, burying Hinostroza’s rebound after a breakaway.

Among the 8,258 fans watching inside KeyBank Center were Cozens’ parents, who traveled from the Yukon, and seven other family members.

“It’s a big confidence boost, for sure, to go against one of the top players in the world,” Cozens said of facing McDavid for the first time. “I was excited. I wanted to be up for the challenge and it’s not just me, though. The whole team played a great game.”

Time will tell, but the turning point in a young player’s career can sometimes be traced to a single outing. Perhaps Cozens, the seventh overall pick in 2019, played that game Friday.

“If I knew a couple years ago that my first time going against McDavid that I’d be line matched against him, it would have been a little overwhelming,” Cozens said. “But I try not to overthink and just go out and play. Just try to look at him as any other player, another guy on the opposing team.”

Granato said: “The way he played tonight, he had an amazing game.”

Caggiula knew a night like Friday would eventually materialize for Cozens.

“He’s got every tool in the toolbox and it’s just a matter of time before he breaks out and is a star in this league,” Caggiula said. “He’s a great player and when he’s playing on his game, he’s a tough player to play against. …

“A couple went in for him and that might be a huge confidence boost for him moving forward. He was a great player today.”

So was Sabres goalie Dustin Tokarski, a tough-luck loser often this season. He made 33 saves, including 14 in the third period.

“Dustin’s been a quiet guy, even yesterday in practice knowing he was starting,” Granato said. “I think he’s a guy that, I mean, we love him because he competes to win. And it hasn’t worked out as much as he’d like but I don’t think that’s been his doing at all. He’s done his part.

“I think the games that he hasn’t won, we didn’t score enough on our side, really. He’s played great the whole season and it’s nice for that reason to see him win tonight.”