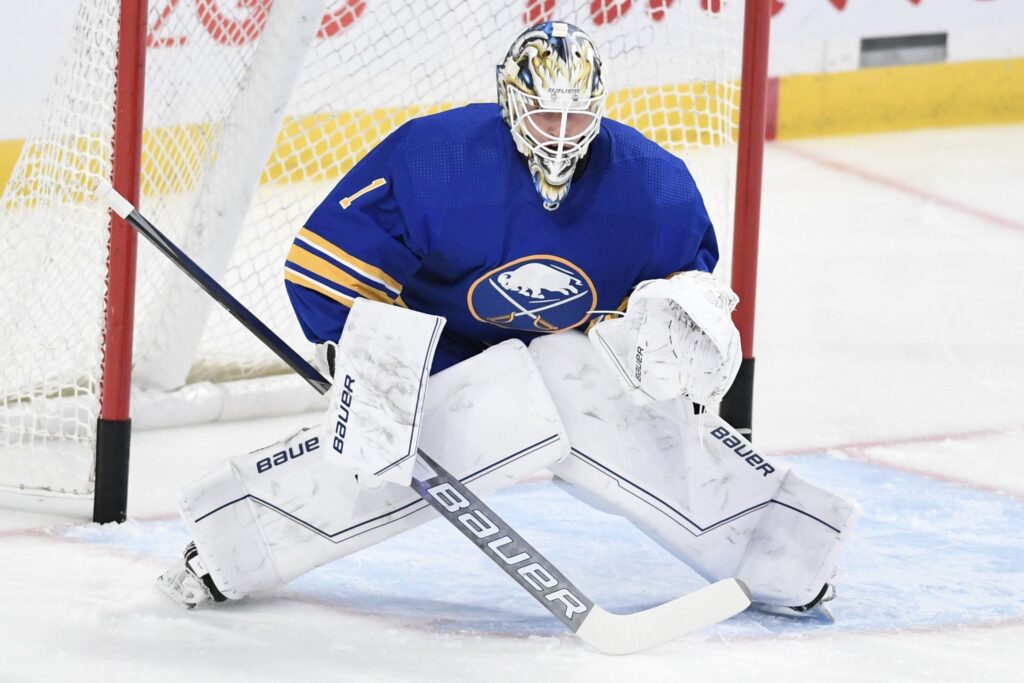 BUFFALO – On the surface, goalie prospect Ukko-Pekka Luukkonen’s preseason looks disappointing. Instead of forcing the Sabres to keep him, they demoted the Finn to the minors 10 days before opening night.

Luukkonen, 22, compiled a 0-2-0 record in two starts, allowing five goals in each game.

Still, coach Don Granato said Luukkonen, one of seven players the Sabres sent to the Rochester Americans on Tuesday, enjoyed “a great camp.”

“He played games in the league last year and he, like most players, like any competitive player, was coming here to earn a spot,” Granato said. “And having that burn going into these games with that, I thought the third period was big for him last night to come back and fight.”

In Monday’s 5-3 loss to the Columbus Blue Jackets, Luukkonen allowed five goals on 21 shots in the first 40 minutes in front of some porous defense. Instead of yanking him, Granato wanted Luukkonen to battle through and finish the game. He responded, stopping all nine shots he faced in the third period.

Luukkonen, of course, will be the Amerks’ starter. Remember, he has only played 48 games as a pro in North America, including just 25 in the AHL. Most goalies need years to develop in the minors before they graduate to the NHL.

“We know he’s a young guy with a lot of potential,” Granato said. “I think the way he approached camp and some of the things we tried to do from our side helped him evolve his game even further, one step further. So he’s leaving here to go to Rochester to gain more experience, more time in the net, with a lot more experience than he had maybe a couple weeks ago.”

The Sabres have 31 healthy players remaining in camp. The Amerks opened their training camp Tuesday.

Weissbach, 23, turned some heads early in the preseason, recording one goal and three points in the third period of the Sabres’ 5-4 shootout win Sept. 28 in Columbus. The Swedish rookie enjoyed a stellar senior year at Wisconsin last season, scoring 12 goals and 41 points in 31 games.

“He had a very good camp,” Granato said. “You don’t know what to expect from a player obviously jumping a level from college hockey to pro. He showed he has dynamic components to his game. Speed, skill, quickness, playmaking ability and evasiveness as well. … He had that at college hockey, but you don’t know if that translates to the next level. It did certainly in spurts. …

“He did a tremendous job. He opened a lot of eyes to his potential at this level.”

Right now, only Casey Mittelstadt and Zemgus Girgensons are entrenched as centers for the Sabres. Granato said Dylan Cozens, 20, could be moved to wing.

Cozens began his rookie season in 2020-21 as a winger before moving to center, his natural position. He pivoted a line Tuesday between Brett Murray and Jack Quinn.

“Dylan’s still a young guy,” Granato said. “He’s still going to have his challenges at center. I mean, it’s a tough position. He did outstanding for us last year. Now the expectations rise. And in fairness to him, he’s still an evolving centerman in the NHL.”

He added: “At any moment he’s potential for the wing. Any moment.”

In addition to Cozens, Cody Eakin, Arttu Ruotsalainen and Tage Thompson centered lines against the Penguins.

“Mittsy and Zemgus are very confident NHL players, very assured,” Granato said. “And the other guys just don’t have that time to feel that way. So the potential ups and downs are there for them.”