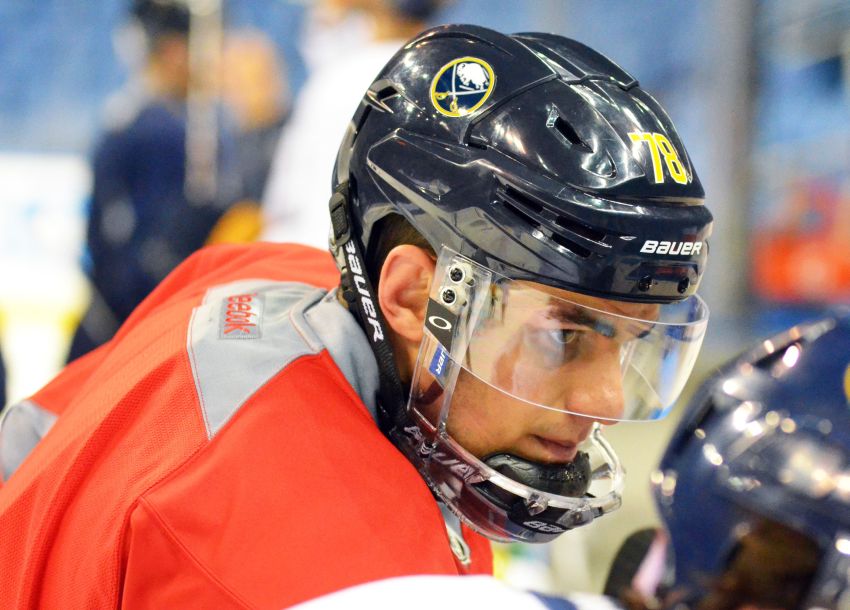 BUFFALO – Injuries have severely limited Corey Tropp’s time here. The ferocious Sabres winger tore up his right knee last season waiting out the NHL lockout in Rochester. Then he broke his jaw during a Sept. 22 preseason fight in Toronto.

Tropp has played just 34 NHL games, the last coming April 5, 2012. Still, the 24-year-old has developed a good feel for this blue-collar city.

“I think this is a city, if you’re working hard, that’s all they ask,” Tropp, who should return for tonight’s home tilt against the Anaheim Ducks, said Friday. “It doesn’t matter if you’re winning or losing. But they’ll respect us as a club if we’re coming out every night competing hard, working our tails off.

“I think (that’s) the message that needs to be sent. As long as everyone’s effort’s there, we got to leave the rink feeling good about ourselves. We got to find a way.”

Fifteen games into the season, the lowly Sabres are a pathetic 2-12-1, the NHL’s worst team. Their efforts, of course, have been iffy, even downright terrible. They just finished their worst October since going 1-7-2 in 1986-87.

The First Niagara Center, where the Sabres are winless, has become an angry building, with booing and chanting for general manager Darcy Regier’s dismissal a nightly staple.

The reeling Sabres need a spark badly. They might get two tonight.

In addition to Tropp, high-energy agitator Patrick Kaleta will likely return from his 10-game suspension for hitting Columbus’ Jack Johnson in the head Oct. 10.

The Sabres must make a move to activate Tropp from injured reserve and place him on the 23-man roster.

Then Jamie Devane pummeled Tropp during a scary fight in the Sabres’ fifth exhibition game.

“I can’t try to get back what I lost in one game,” said Tropp, who noted he won’t change his style.

Rolston expects an adjustment period for Tropp, who practiced Friday on the right wing with Ott and center Marcus Foligno.

“It’s probably going to take him a little bit, too, to get where he wants to be, I would imagine,” Rolston said. “But just out on the ice you can see the energy he brings to the table for us.”

What does Tropp bring to the table?

“He gets to the hard areas,” Rolston said. “He plays a pretty north-south game and he’ll get to the net. So he’ll be in the area there to have opportunities, and he can finish. He’s got a good release around the net, and he’ll be there a lot.”

Kaleta, meanwhile, had a hard time watching the Sabres play for three weeks.

“It stinks sitting there watching your teammates going out and playing and you not being able to help out,” the winger said.” You sit there and … not being able to do anything hurts you as a person because you’re a team and you battle through everything together.

Kaleta, who’s been suspended twice in his last 21 games, insists he’s become a calmer and more complete player over the years.

Perhaps an infusion of energy will help the Sabres start the game better.

Their first-period numbers are staggering. Opponents have outscored the Sabres 20-2 during the opening 20 minutes and outshot them 210-107.

Yes, you read those numbers correctly.

“You can go into a game lackadaisical or you can kind of mentally prepare yourself, and I think we can take a few minutes before every game and break down what you have to do mentally,” McCormick said. “Then … it’s us coming out with a little more drive and not waiting to see what the other team’s going to do, us dictating. That goes with preparation.”

John Scott told the Times Herald he has accepted his seven-game suspension and won’t appeal. The NHL issued the long ban Thursday for hitting Boston’s Loui Eriksson in the head last week.

The tough guy said he wants to put it to rest.

Scott skated as a defenseman Friday beside rookie Nikita Zadorov, a strong sign the Russian will sit his second straight game tonight.

“Get some perspective on things,” he said about sitting Zadorov.

Rolston lauded Zadorov earlier this week, hinting the Sabres might keep him all season. Scratching him doesn’t change his opinion, Rolston said.

Rookie winger Joel Armia, out since breaking his hand during the preseason, is about a week away from returning and will be sent to Rochester when he’s healthy, Rolston said.

“He’s got to play some games there,” Rolston said. “It would be tough throwing him right into this league.”