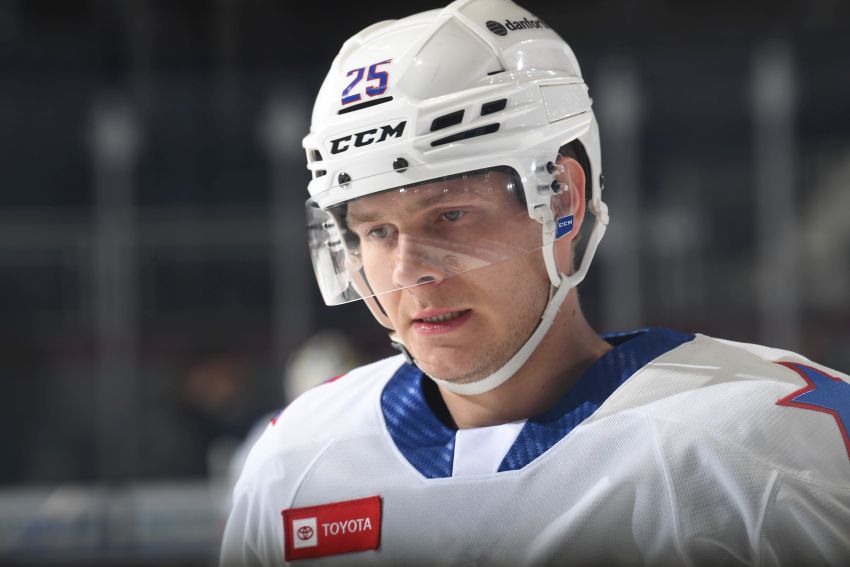 ROCHESTER – For three and a half months, Buffalo Sabres prospect Arttu Ruotsalainen has been on a scoring tear, developing into one of the AHL’s most lethal threats.

Ruotsalainen, 24, earned AHL Player of the Month honors for March, compiling eight goals and 18 points in 13 outings for the Rochester Americans.

Overall, the Finnish center has recorded 18 goals and 50 points in 51 games with the Amerks this season, including 18 goals and 48 points in his last 44 appearances.

“I’m not thinking too much when I’m on the ice and it’s kind of coming from inside of me,” Ruotsalainen said following Friday’s 2-1 loss to the Belleville Senators at Blue Cross Arena. “It’s kind of (the) best feeling you can have when you go on the ice and you trust yourself and you know you are getting scoring chances.”

But his dominant stretch hasn’t earned Ruotsalainen any fresh chances in Buffalo.

As a rookie a year ago, he forced his way up to the NHL, scoring five goals in the Sabres’ final 17 games. He parlayed his first stint in Buffalo into an impressive training camp and a roster spot for the first six weeks this season.

Ruotsalainen played 16 games, mostly as the fourth-line center, registering two goals and four points before the Sabres sent him to the AHL. Other than a two-game stint when COVID-19 began decimating the Sabres, he has remained in the minors.

Since early January, forwards Brandon Biro, Ryan MacInnis and Jack Quinn have all earned recalls ahead of Ruotsalainen, although Biro and MacInnis each played just one game.

A report recently surfaced in a European publication that suggested Ruotsalainen, whose two-year, entry-level contract expires after this season, could play in Switzerland next season.

“That’s not true,” Ruotsalainen told the Times Herald. “I haven’t signed any contract.”

Does Ruotsalainen, who can become a restricted free agent, feel he has a future in the Sabres organization?

Ruotsalainen, of course, acknowledged he thinks about Buffalo sometimes.

“But my main focus is here and when I’m playing here, I give everything to that team,” he said late last month.

Ruotsalainen’s time in Rochester this season has been valuable and helped buoy his development. Following a slow start – just two assists in his first seven games – he said started figuring things out after the Christmas break.

“I just have to do everything I can in practice and the gym and whatever it takes,” Ruotsalainen said. “I just try to build my habits to be a pro and how to keep on all those different little things. I think that’s building me to get confidence and all the success on the ice.”

“He just shows up every day and has a real intent of getting better, puts a lot of extra time in from his conditioning standpoint and he’s looking quicker and faster right now, which on top of his strength and competitiveness has allowed him to have a really good run right now,” Appert said last month.