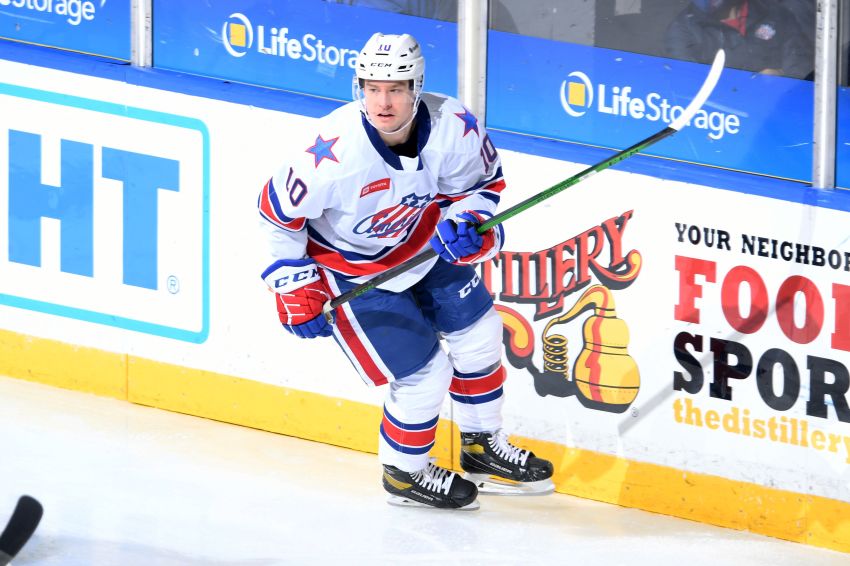 Brandon Biro has been on a tear in Rochester. ©2022, Micheline Veluvolu, Rochester Americans

BUFFALO – Whether it’s tonight against the Montreal Canadiens or later during the Sabres’ five-game road trip, center Brandon Biro will likely make his NHL debut soon.

Biro, 23, has been on a tear for the Rochester Americans, compiling nine goals and 31 points in his last 28 games. The Penn State product figured to earn a look from the Sabres sooner or later.

On Tuesday, with winger Victor Olofsson sidelined by a non-COVID illness, the Sabres recalled Biro to the active roster following practice. Biro had two stints on the taxi squad earlier this season.

While Sabres coach Don Granato wasn’t sure if Biro would dress tonight, he said he’s “excited” to see the prospect play.

Granato said Biro’s style will help him acclimate to the big leagues and his new teammates.

“When you bring a guy up to the NHL level, you need to put him with guys that want to play with him,” Granato said inside KeyBank Center. “And he interacts well around him, he sees the developing play, he uses his linemates, his teammates, he supports them well with the puck. So there’s detail in his game right now beyond just skill. So he’s gained that maturity. And to me, that’s what’s been impressive when I watch him. We can get him in the NHL right now.

“The hard thing is when you bring a talented guy up, your players are like, ‘Kid, give me the puck,’ or, ‘That was your guy, I’m a minus-1 because you didn’t pick up your guy, you didn’t know it was your guy.’ It’s tougher to get guys in your lineup then. But with Brandon, he’s got a real good feel for the game, a knowledge for the game.”

Overall, Biro has recorded nine goals and 36 points in 39 games this season. He ranks fifth in the AHL in rookie scoring.