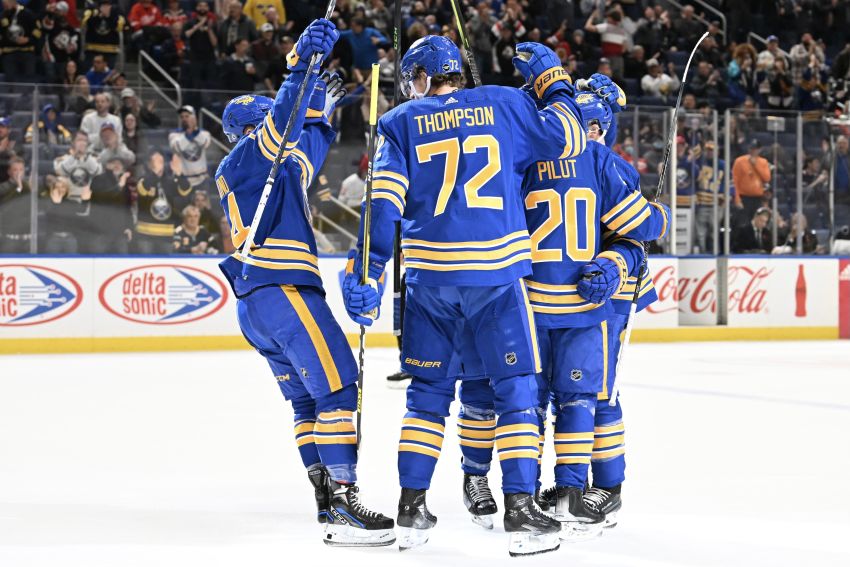 BUFFALO – Sabres center Tage Thompson stood at his locker following the best outing of his career, a dynamic three-goal, six-point effort in Monday’s 8-3 victory, and it was hard to tell if he had done anything in the game.

Thompson’s slow start this season already feels like a distant memory. Prior to center Dylan Cozens’ third-period goal against the Detroit Red Wings, he recorded a point on eight straight Sabres goals over two games, a feat that has been accomplished only two times in team history.

Going back to the third period of Saturday’s 4-3 overtime win against the Chicago Blackhawks, Thompson has registered a stunning five goals and nine points.

Still, following one of the greatest individual nights in franchise history, Thompson, 25, sounded almost as if he had gone pointless in a loss.

“You just go about your day the same way,” said Thompson, who mustered just one goal and three points in the first seven games. “I think one of the keys is to probably not get too high. Same thing if you have a bad game, you don’t want to get too low. You try to stay even keel and just kind of keep doing what you’ve been doing. That’s the mindset I’m going to stick with going forward.”

Hey, stick with what works, right?

Right now, the 6-foot-7 Thompson, who signed a seven-year, $50 million contract late in the offseason, is the NHL’s hottest player.

As Thompson struggled offensively for two weeks, he said he never lost his confidence. Sabres coach Don Granato, meanwhile, said his top pivot would start scoring, he just wanted him to relax and play a simpler style.

“The confidence has been there from the start of the season,” said Thompson, who registered nine shots on goal Monday and has 25 over the last three games. “I think maybe the first three games I wasn’t getting enough shots, maybe being a little too cute. I just tried to simplify and get pucks to the net.”

Thompson opened the scoring 16:52 into the game, unleashing a wicked one-timer from the left circle. His nifty power-play goal from the slot 18:30 into the second period made it 4-1. He completed the hat trick 15:58 into third period, moving around a defender in front, deking and beating goalie Alex Nedeljkovic to make it 7-3.

Sabres defenseman Rasmus Dahlin said Thompson has been giving off “a swagger.”

“You see him before the games, he’s relaxed and he’s got high confidence right now,” he said. “You just got to pump the tires so he keeps going. We love it.”

Dahlin added: “Night in, night out he’s always like this. I’m not surprised at all. It’s going to come, more nights like this.”

For Granato, who also coached Thompson in junior, watching such a dominant performance before the Halloween crowd of 9,763 fans at KeyBank Center was special.

Thompson struggled for years to make a mark in the NHL. In 2020-21, he was a healthy scratch. But his career took off last year after Granato moved him from right wing to center, and he scored a team-high 38 goals.

“It’s enjoyable to watch Tommer having history with him, watching him when he was 16 years old, watching him grind his way to this point in his career,” he said. “There’s a special meaning there when you go through that with somebody and you know they put the work in.

“Yeah, that was exciting. The thing that sticks out is the excitement of the bench and the players around him. It really tells you the person he is.”

Thompson joined Hall of Famer Pat LaFontaine, who accomplished the feat in 1992-93, as the only Sabres to have a hand in eight consecutive goals.

“He’s one of the best to play the game so to be mentioned in the same breath is a pretty cool feeling,” Thompson said.

Coincidentally, LaFontaine was also the last Sabre to have a six-point game (Feb. 10, 1993).

“It’s nice, I guess,” Skinner said of his 300th goal. “It means I’ve been around a while, I guess. But I think for me, you’re not going to score goals unless you’ve got five guys on the same page out there. Obviously, it means that you had some good chemistry with guys over the years.”

Sabres goalie Eric Comrie made 15 saves. Nedeljkovic, meanwhile, made 43 stops. The Sabres have 136 shots on goal over the last three games.