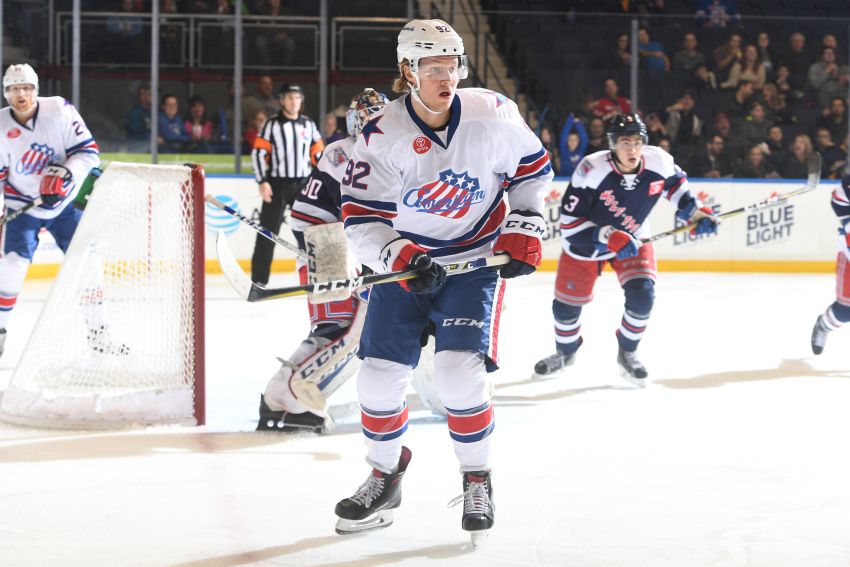 Alexander Nylander got off to a slow start in Rochester. ©2018, Michline Veluvolu, Rochester Americans

BUFFALO – In the AHL, where Alexander Nylander has spent most of the last season and a half, the slick forward is still a youngster adjusting to pro hockey.

But at the World Junior Championship, Nylander, 19, is a veteran. In his third and final tournament, Team Sweden, which will compete for a gold medal tonight, has leaned heavily on the Sabres prospect.

The Sabres recently assigned Nylander to Team Sweden in the midst of what he called a “little bit frustrating” season. After suffering a lower-body injury in rookie camp, he missed two and a half months.

Following his Nov. 17 season debut, Nylander, the eighth overall pick in 2016, struggled with the Rochester Americans, compiling only two goals, six points and an ugly minus-9 rating in 15 games.

But Nylander quickly found a groove at the tournament, showcasing his offensive talents and, even more importantly, growth in other facets.

“It’s tons of experience,” coach Tomas Monten said Thursday of Nylander’s presence following Team Sweden’s 4-2 semifinal win against Team USA. “It’s been great for our younger players. Playing (in) his third World Juniors, he doesn’t need to get tense or anything. I think it developed his defensive game.

Defensive development, of course, is vital for Nylander’s future. In the modern NHL, strong defense – a 200-foot game, as they often say – generates offense.

In Thursday’s win before an announced crowd of 7,524 inside KeyBank Center, Nylander assisted on the first goal, his seventh helper and eighth point for 6-0 Sweden.

But Nylander, who has been pegged as a one-dimensional player, displayed more notable play away from the puck.

“He was really good, especially in all situations,” Monten said. “He played some real good PK shifts, won some important draws and he really battled for us. That’s the player he’s grown into. I think you can trust him.”

Nylander said the tournament is a “huge help” for his confidence.

“It really helps my development,” said Nylander, who has scored 10 goals and 28 points in 20 career World Junior outings.

The Sabres’ old regime also sent Nylander to the World Juniors a year ago. A strong tournament, however, couldn’t boost his rookie AHL season, and he struggled before the Sabres gifted him a four-game recall.

This season, Nylander will likely have earn a promotion from Sabres general manager Jason Botterill, who knew the tournament could help him.

“We just told Buffalo if we can help and play him and you can feel it’s a good thing for him, a good experience, then we’re really happy to have him,” said Monten, whose team will face Team Canada tonight.

Team Sweden knocked off the defending gold medalists Thursday and will play for its first World Junior title since earning a silver in 2014. The country last won gold in 2012.

Team Sweden led 4-0 before two late goals made it interesting. Still, the game was scoreless until more than 13 minutes into the second period.

Despite Thursday’s disappointing outcome, playing the tournament in Buffalo has been special for Mittelstadt, 19, a freshman at the University of Minnesota.

Amerks goalie Linus Ullmark and rookie forward C.J. Smith have been named to the AHL All-Star Game on Jan. 29 in Utica, the league announced Thursday.

Ullmark, an All-Star last season, is tied for the AHL lead with 15 wins and two shutouts and has played a league-high 24 games.

Smith, meanwhile, has a team-high 20 assists and 30 points in 34 contests.