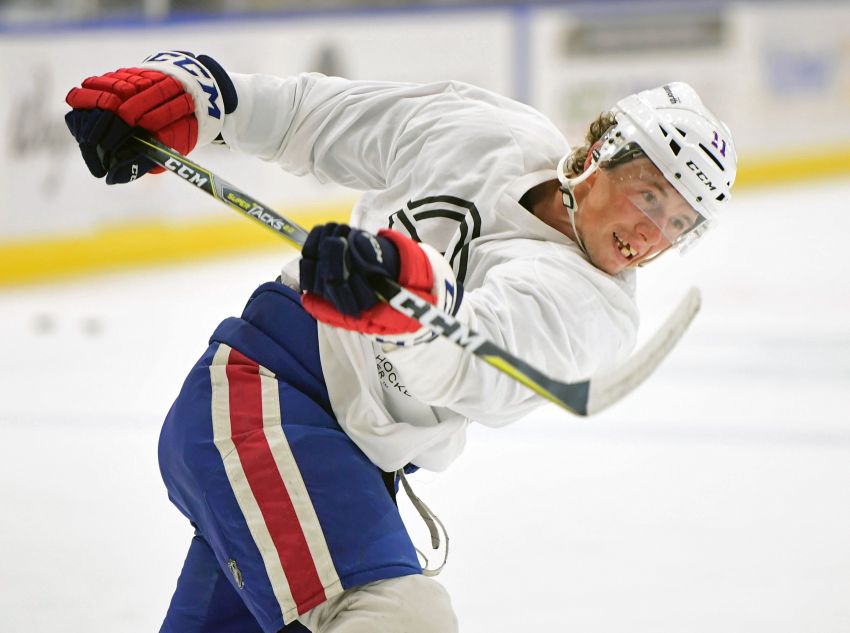 Tim Kennedy has been skating with other pros at HarborCenter. ©2017, Hickling Images, Olean Times Herald

Last season, after joining the Rochester Americans in December, the talented free agent forward compiled 25 assists and 29 points in 47 games with the Sabres’ AHL affiliate.

Playing so close to home was a special experience for Kennedy, a veteran of 162 NHL contests, including 79 with the Sabres.

But Kennedy’s chances of returning to the Amerks essentially ended when the Sabres fired general manager Tim Murray on April 20.

“I was hoping to stay in Rochester, but once they made the whole front office change, new faces coming in, they want to bring their new faces in as well,” Kennedy said Thursday following a late-summer workout. “So that’s just a side of the business.”

Kennedy still needs a gig for the upcoming season. He’s hopeful can land in an NHL training camp in two weeks, either on a contract or a tryout. He said he’s talking to three teams about deals that would likely place him in the AHL.

“I can play, I still want to play,” Kennedy said. “I had a lot of offers from overseas, but it’s not really what I want to do right now, just because of family. It’s getting tough over here, because everyone’s getting younger.”

Productive veterans like Kennedy – he has 75 goals and 296 points in 382 AHL appearances – often get squeezed out of jobs because league rules limit veterans.

“When I was younger, they had older guys on AHL teams to kind of help some young guys,” Kennedy said. “Now there’s a few older, but they’re really transitioning to a younger league, and that’s come into play with the veteran rule.”

With three young children – Kennedy and his wife, Janelle, have a son, Jackson, who just celebrated his first birthday, and twin daughters, Harper and June – he doesn’t want to play overseas. He endured a rough season in Russia two years ago and spent the early portion of last year in Sweden before the Sabres brought him back.

Kennedy said he has no hard feelings toward the Sabres. Playing in Rochester brought back memories of his rookie season with the Portland Pirates, who were the Sabres’ affiliate when he turned pro in 2008-09.

He said he wants to play three more seasons so his son can realize what his father did for a living.

“I thought I had a pretty good year last year, and that’s just how it’s going to go right now,” Kennedy said. “I’m hoping to stay (in North America).”