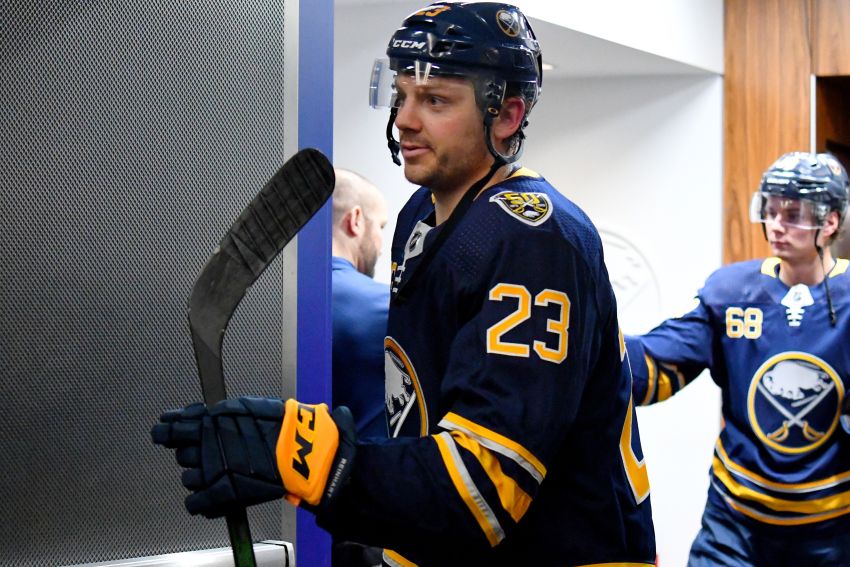 For the first time since Sam Reinhart played for the Vancouver NW Giants in 2010-11, the Buffalo Sabres winger is spending the fall at home.

Normally, Reinhart, who turns 26 on Friday, would be one month into a new hockey season. Since leaving home in 2011, he has spent his Octobers and Novembers in Kootenay, British Columbia, where he played junior, or Buffalo.

But the COVID-19 pandemic has forced the NHL to push back the anticipated start date of the 2020-21 schedule to Jan. 1. So Reinhart is home preparing for an uncertain hockey season and taking in the color that has engulfed postcard-pretty Vancouver.

“It’s bizarre,” Reinhart said on a Zoom call Thursday. “It’s very odd being in Vancouver here seeing the leaves change. I don’t think I’ve seen that since I was 15 years old. It’s a little bit of a mental grind to stay in it. Luckily, I enjoy the working-out process, the training process.

“But that’s usually a couple-of-months gig; it’s not usually a full year of doing that unfortunately. I think everyone’s kind of looking forward to the conversations over the next few weeks of trying to get this back on track, and trying to get back into our cities, and get on the ice with our teammates once again.”

Reinhart, who signed a one-year, $5.2 million contract Oct. 25, has new teammates he hasn’t met. The Sabres have added five new faces expected to be on the NHL roster, including winger Taylor Hall, the 2017-18 Hart Trophy winner, and center Eric Staal.

“Exciting,” Reinhart said of the moves. “As a player, you love to see the fresh faces, the level of players they’re bringing in.”

On paper, the Sabres look better than last season, when they missed the NHL’s playoff qualifying round by one point. Their recent acquisitions could help them improve enough to grab their first postseason spot since 2011.

Exactly 400 games into his NHL career, Reinhart, the second overall pick in 2014, hasn’t sniffed the playoffs. Neither, of course, have captain Jack Eichel, defenseman Rasmus Ristolainen and other members of Buffalo’s core of homegrown talent.

“It’s important to use those experiences, whether they’re positive or negative ones,” Reinhart said. “As you get older and you play more years, you try to use those to your advantage. With that being said, there are a lot of new faces in the locker room and we know firsthand every year is different.”

Reinhart had no problem re-signing for just one year. The pandemic has wreaked havoc on teams’ finances, and the NHL has frozen the salary cap at $81.5 million.

“I think every player in the times right now would be open to a long-term deal,” said Reinhart, who just completed a two-year, $7.3 million deal. “Unfortunately, that’s not always the case and it’s not always available. I’m certainly comfortable playing on short-term deals like I always have.”

He added: “I’ve done a lot that I want to be recognized for and be here long-term, for sure. There’s no question about it. Do I think I’ve proven everything? No, absolutely not. I don’t think anyone can say that with the level or lack of success we’ve really had as a team.”

A breakout season could help Reinhart earn a long-term deal next year. He ended his sixth NHL campaign in a career-worst slump, going pointless in his last eight outings.

Still, for nearly five months, Reinhart showcased more consistency than in past seasons. Before he started struggling in late February, he never went more than three games without recording a point.

Reinhart compiled 22 goals, 50 points and a minus-15 rating in 69 games last season. Sabres coach Ralph Krueger upped his ice time from 18 minutes, 57 seconds a contest to 20:38.

“With the ice time increasing, I think I felt fresher that much more each game with those added minutes,” he said. “I think it was attributed to the work I’ve been putting in in the offseasons and just that much older and stronger, and was able to stay fresh on a consistent level. I was really happy with that.”

Reinhart said he knows new GM Kevyn Adams “quite well” and skated under his direction during the offseason at LECOM Harborcenter.

Naturally, Reinhart said it “was certainly a shock” to see the sudden changes. But the team’s recent acquisitions had a bigger impact on the players.