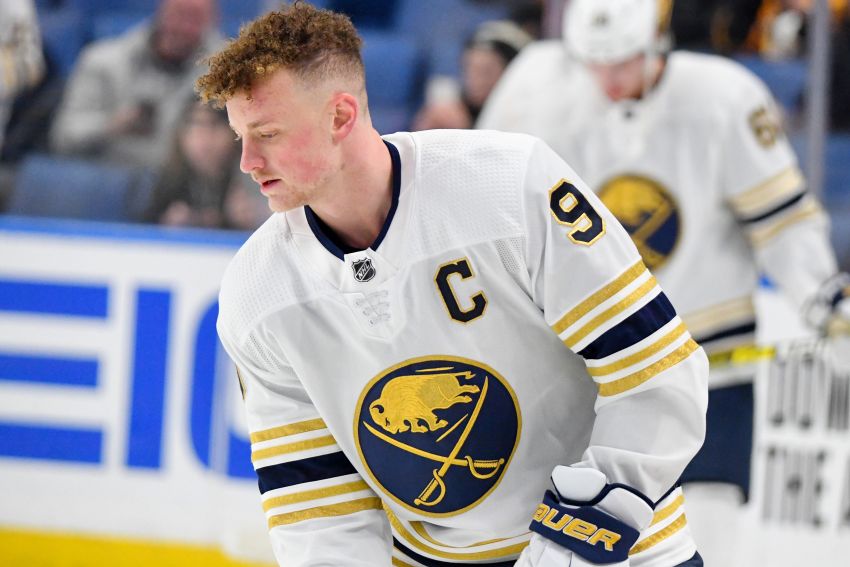 In their first five seasons with Jack Eichel, the Buffalo Sabres have been a perennial loser, winning just 39 percent of their games. Despite earning his place among the game’s elite talents, the captain still hasn’t sniffed the playoffs.

This year, the Sabres missed the NHL’s 24-team postseason qualifying round by one win.

When Eichel was drafted second overall in 2015, the thought of the Sabres missing the playoffs for the next five years would’ve seemed ridiculous.

The American, of course, was supposed to lead them back to glory. Instead, they’ve maintained their place as one of the league’s laughingstocks.

“Listen, I’m fed up with the losing, and I’m fed up and I’m frustrated,” Eichel said on a Zoom call Thursday, two days after the Sabres’ season officially ended. “It’s definitely not an easy pill to swallow right now. It’s been a tough couple of months (since the Sabres played their last game). It’s been a tough five years with where things have went. I’m a competitor. I want to win every time I’m on the ice. I want to win the Stanley Cup every time I start a season.

“I’ve already started preparing for next season now. I’m already back on the ice. I’m already training. I’m already doing things to try and better myself for the start of next season, whenever that is. I’d be lying if I said if I’m not getting frustrated where things are going.”

Still, Eichel sees progress – “We took a step this year,” he said – in the Sabres under coach Ralph Krueger, who was hired a year ago.

“It’s been a pleasure working with Ralph,” he said. “He does so much for our group every day. And there are tough times. He does an amazing job of bringing us back in and narrowing our focus and getting us back to where we need to be mentally. …

“But, yeah, I’m definitely not in the greatest place where the last little bit went. It’s definitely worn on me.”

Eichel morphed into a superstar this season, generating Hart Trophy talk as he scored a career-high 36 goals and 78 points in 68 outings. If an undisclosed injury hadn’t slowed him in the final weeks of the season, the ultra-talented center might’ve cracked the 40-goal mark. For much of the campaign, it appeared he could become the first Sabre to reach the 50-goal and 100-point milestones since 1992-93.

Eichel performing in a best-of-five series – because of the COVID-19 pandemic, the NHL will utilize a qualifying round if it can return this summer – would be intriguing. In one five-game stretch this season, he scored five goals and 10 points.

Imagine what that kind of torrid production would mean in a short series? A single victory could’ve gotten the Sabres there and kept their season going.

“They’re gaining valuable, valuable experience as a group,” Eichel said of the eight teams in the qualifying round. “And we’re not one of them. So it does add to the frustration … a lot.”

Showcasing his frustrations and competitive side is nothing new for Eichel. But in recent years, he has matured. He has stopped pouting.

Clearly, the captaincy, which he assumed prior to the 2018-19 season, has changed him.

“You have to understand your teammates, their personalities,” he said of his growth as a leader. “Who you can push, who you can get on, who you can’t. Who you need to kind of bring along. It takes a lot to do that. I just try to do what needs to be done.

“I’m the farthest thing from a finished product as a leader and player, but you try to use your experience to better you.”

Eichel was just 2 years old when Michael Jordan retired from the Chicago Bulls for the second time, meaning he never watched the NBA legend at the height of his greatness.

But Eichel developed an appreciation for Jordan, who competitiveness is legendary, thanks to his father, Bob.

“My dad’s a huge Michael Jordan fan and passed that on to me,” he said.

Not surprisingly, some Sabres recently watched “The Last Dance,” the 10-part documentary series ESPN aired on the dynasty Jordan’s Bulls enjoyed in the 1990s.

Learning more about Jordan – he wanted to be the absolute best – made at least two of Eichel’s teammates think about him.

“Looking at how much of a leader Michael Jordan was, I couldn’t help but think about Jack and his competitive drive and trying to make his teammates better this year,” Sabres defenseman Jake McCabe said of Eichel.

“Jack’s got that,” said Okposo, who has said Jordan is his favorite athlete of all-time. “He’s not Jordan, but he has that mindset of just wanting it so bad and that is something that’s very rare.”

Eichel said hearing his teammates laud his leadership skills and the strong example he sets was “extremely humbling.”

Not surprisingly, Eichel said he “loved” the documentary.

“My takeaways from ‘The Last Dance’ (are) how much Jordan cared about being the best, how much he cared about winning, and it seemed like nothing else mattered. He didn’t let anything else get in his way, and no matter what it was it seemed like he said it multiple times through the documentary, ‘Win at all costs.’”