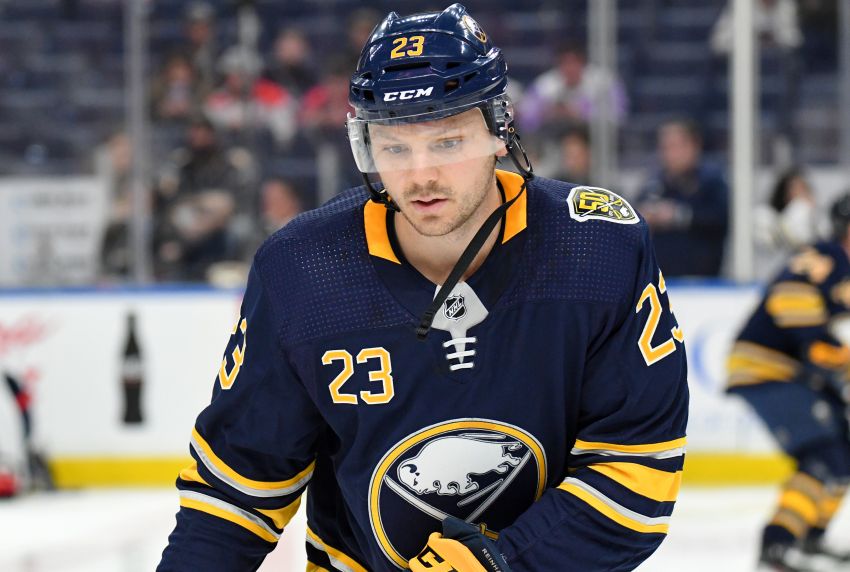 BUFFALO – Late in Monday’s 3-2 shootout win, Sabres winger Sam Reinhart grabbed the puck along the right boards and skated below the goal line before quickly threading it through a cluster of defenders.

The play showcased some of Reinhart’s best talents – hockey sense, vision and adroit passing – and appeared to end his point drought.

But officials ruled winger Jeff Skinner interfered with Holtby, so Montour’s goal, which would’ve put the Sabres up 3-2 with 2:48 left in the third period, was disallowed.

Reinhart’s pointless streak reached eight games, tying the longest of his five-year career. He has compiled an awful minus-9 rating in that stretch.

“‘Snakebitten’ is definitely a word that comes to mind, but the chances have been there as of late, so try to stick with that,” Reinhart said Tuesday of his recent play.

Reinhart, who played his 400th NHL game Monday, hasn’t recorded a point since registering a goal and an assist in the Sabres’ 5-2 road win against the Pittsburgh Penguins on Feb. 22.

Without his offensive production, the Sabres’ have fallen out of the playoff race, compiling a wretched 2-6-0 record. Monday’s victory ended a six-game losing streak.

Of course, Reinhart, 24, is hardly alone in his struggles. The Sabres have scored only 14 goals in the last eight games.

As the disallowed goal he created Monday illustrates, Reinhart has started displaying some of his regular form, generating more offense. In Saturday’s 3-1 road loss to the Philadelphia Flyers, he pumped six shots on goal.

“There’s definitely a time throughout this last two weeks or so that the chances haven’t been there,” Reinhart said following an off-ice workout inside KeyBank Center. “So I definitely try to adjust and try to learn what the difference was in my game. I think those chances have been back. I think a little bit more urgency on the puck has to led to creating more offensively.”

Prior to his slump, Reinhart enjoyed terrific consistency, never going more than three games without registering a point. Reinhart compiled 22 goals and 50 points in the first 61 contests, putting him on pace for a career-high 30-goal, 67-point campaign.

Sabres coach Ralph Krueger said Reinhart and Eichel, the Sabres’ offensive catalyst, have been trying to do too much as they struggle with their confidence.

“Sometimes what happens is you start forcing other areas to make up for not having the success, and they just got to get back to the basics, and we’re trying to simplify things in their minds to then be able to get their genius to flow again,” Krueger said prior to Monday’s game.

So Krueger would like to see Reinhart and Eichel have more patience. That means playing within the system and picking your spots.

“Instead of forcing things, maybe go two, three, four shifts where nothing but the team game is evident, and then the opportunity arises and you jump into that hole,” he said. “At the moment, they’re maybe going out every single shift trying to create something.

“I think earlier when they had their hot streaks it was more balanced in when you forced it and when you didn’t. I think that’s what we’re speaking about right now. The skill is there, the attitude is good, the conversations are excellent.”

Despite the struggles, Reinhart believes he has had the best season of his career.

“It’s tough standing here right now saying that with the frustration in my own game at the present time,” said Reinhart, who has compiled an ugly minus-15 rating this season. “But overall, I’m definitely happy with the work I’ve been putting in to be more consistent. But that makes it only more frustrating at this point in time, for sure.”